Just as the anchor drop was about to take place I got a call from my friend Linda back in CT (soon to feel the brunt of Sandy). I said I’d have to call her back when we were done and finally, two hours later I did. The process never takes that long, but here’s why it did this time: wind was out of the south now, but would switch to NE overnight and stay N to NE, so we used our dinghy anchor off the stern to keep our bow pointed N, and dropped big boy Rocna; then we switched out the little anchor for the larger Fortress using the dinghy which had to be launched first; finally we raised and re-positioned the Rocna. Phew! No way was I going to complain at the time it took to get us anchored correctly; sleeping reasonably well was tops on my list!

I called Linda back, got voice mail and when she called me back, guess where I was? Yep, up on deck working on another Rocna re-position. Only this time it would not come up; you could see the bows dip down at the pull and the anchor chute was about to come loose. Thus began a major effort using the dinghy to pull up on the trip line (we rarely use one but this time needed to know exact location of anchors) but with minimal success.

We opted for wait and see, and don’t you know it but that anchor came up easily the next morning.  Chain must have gotten caught on lord knows what and I don’t want to know. When the wind switched around during the night the chain got free. One down, one to go. Placed the Fortress about 20° west of big boy. The morning passed quickly; the resident blue herons were entertaining and naturally photogenic. Storm prep completed; now bring ‘er on and let’s get this done with.

The mandatory on-scene photo shoot- so close to shore

A patient heron snags his snack

Pretty sure I’ve mentioned before that when we over-prepare the worst does NOT come to pass; and this event was no exception. Yes, Sandy was nasty, huge and long-lasting. Folks back home in CT began feeling the effects before she’d bid farewell to us. Much appreciate all the calls and emails we received from so many checking to see if we were OK.  By Monday we were the ones doing the checking up. Our spot was so protected that the gusts to 45 mph recorded by the weather buoy in the river two miles away, hit us at less than 30. Given we sat about 100ft from the marsh grass shore, fetch was not an issue nor could I say we even had wavelets on the water.

Sunday morning the wind had blown enough water in (from Pamlico to the Neuse to us) to raise the depth by two feet, giving us a comfortable 7.3ft. But you know the saying, right? 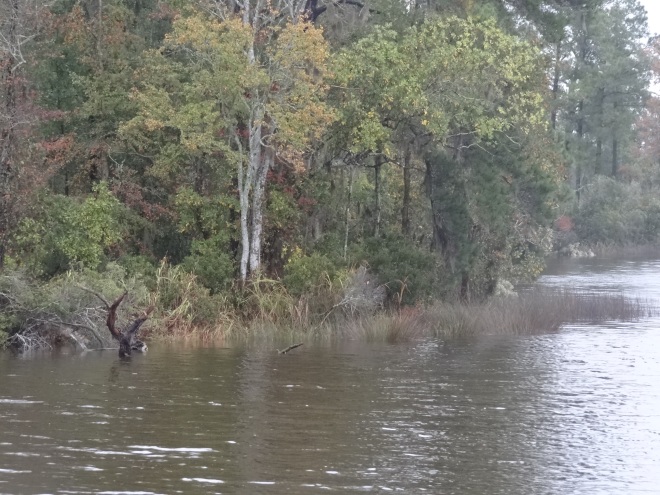 The heron’s perch is now mostly under water

Not long after I’d uploaded the last blog post, we got a surprise email from cruising folk we’d met in the spring of 2011 on Patience.  The usual boat card exchange had taken place and they’d been following us. Freaky thing was that when I was re-organizing my boat cards that morning, I’d come across theirs and noted they lived in New Bern… in fact they lived 10 mins away and wanted to help us in some way.  Can you feel the love? Ended up making plans for us to dinghy up to Duck Creek Marina Monday where they’d pick us up for lunch, a town tour and end up at the grocery store. Sat and Sunday had rained all day but Monday was just overcast with a threat of rain.  I can only say we were cared for in a way only another cruiser could and with all the understanding that goes along with it. We talked about other places to move to, because the wind, as it switched to SW was going to push water out. Happening already; we were now sitting in 4 ½ ft.  We discovered they have solid plans to land cruise in an RV and I’m happy to know that it’s not uncommon for boat cruisers to become land cruisers.

Not wanting to find ourselves sitting in mud during the night, we bravely and carefully brought up both anchors (I am usually nervous Nellie at the helm in tight quarters) which due to the shifting wind we’d moved again in the morning. We opted to head over toward the west shore of the Neuse for protection from the SW wind. As we stuck our nose out of the creek we learned just how protected we’d been. Ugh. Monday night the wind howled and while our new spot was no Duck Creek, it was Ok for one night.  Our plan was to secure a spot at the dock at Morehead City Yacht Basin for Tues and Wed night ; fingers crossed they’d have space when I called in the morning.

2 thoughts on “Settling in for Sandy”