Treats for all!  No tricks, not after Ms Sandy; that was enough. We treated ourselves to a two-night marina stay at Morehead City Yacht Basin after moving from our hurricane hole.

Wednesday was a day of boats on the move; the radio was alive with passing arrangements and comments about swift currents. We kept the VHF on to listen for any problem areas, Coast Guard announcements and get a beat on the whereabouts of boats we knew.

Halloween night was our second night and not only did we treat ourselves to dinner at Floyd’s 1921, but we had trick- or-treaters come to the boat!  Of course I was not prepared, this being a new possibility in the lives of a boat seldom at a dock. We quickly put some of my (confession time) peanut M&Ms in three snack baggies and handed those out. M/V Makara, a captained ninety footer with one woman crew member, was docked behind us and they were prepared with a basket of goodies. The woman confessed that her mom had sent the candy to be sure they had some. Next year I’ll be sure to buy a bag of M&Ms snack size- just in case. 🙂 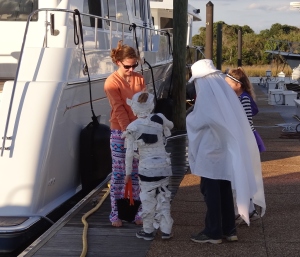 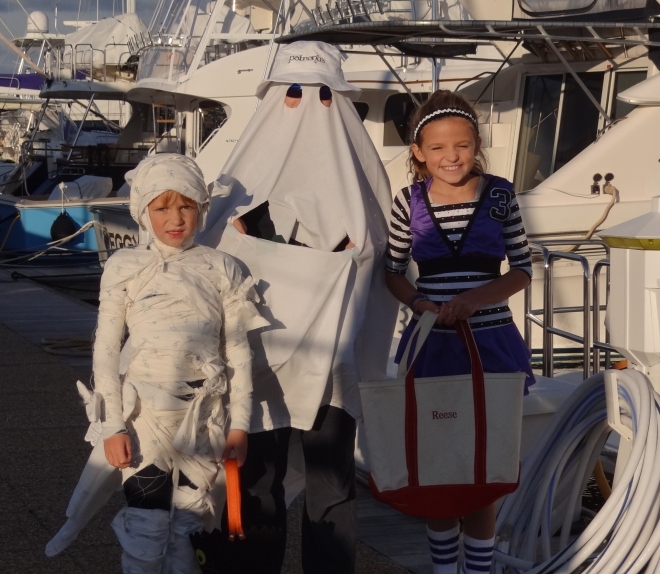 Even cruising kids want to Trick or Treat

Thursday we headed out, hoping that the 65’ highrise bridges would not have too much water under them.  Storm surge and the recent full moon made for very funky tide ranges and currents; no one could accurately plan ahead. Lady Luck was your best bet. Usually, we prefer to make a coastal trip between Beaufort and Wrightsville Beach. Two good inlets and doable in 10 hours- roughly.  Jumping out here avoids having to time the scheduled opening bridges. Unless you want to get going at  o’dark thirty, the average sailing vessel won ‘t make it to Wrightsville anchorage via the ICW in daylight. Conditions weren’t right for a jump outside and we’d been hanging out in NC long enough; so ICW it was.  Using ActiveCaptain, we located a place with good depth (for us that would be between 5 and 10 ft), room for several boats and an easy approach; Sloop Creek.

A few hours into our trip, just north of Swansboro, NC, a monohull (Pearson I guessed) just ahead hailed us. A few seconds before I’d had the binocs on them to see the boat name in case we needed to call them about passing. I put them down quickly when I saw theirs were trained on us. Umm, odd.

The radio comes to life with, “This is the sailing vessel Lutra calling the catamaran behind us.” Did they want us to pass, or not to pass, or maybe they wanted to know what make of cat we were? “Can we switch to 17?” asks a pleasant-sounding female voice. Now comes the classic land neighbor question; you know, the one about borrowing a cup of sugar.  My face must have registered surprise, delight and confusion all in a 30 second time span. The woman on Lutra wanted to know if we could spare two eggs as this was her uncle’s birthday and she wanted to make cookies but realized had no eggs.  Luckily I had plenty, even though Russ had used three to bake Challah bread. How to make a safe transfer? I wrapped the eggs in paper towels and placed them in a plastic (non-zip style) bag leaving a bit of air and secured with a twist tie. Russ didn’t want to snug up too close, therefore an egg toss was out of the question. The boat hook was called into use and we wrapped blue tape around the neck of the bag and I went to the bow for the hook, wrapping the remaining length of tape just before the actual hook.

Eggs, set, go! I am so nervous at this point.

I even did a quick weight test to be sure the tape would hold the bag. The wind had other ideas and when I extended the precious cargo toward Lutra, halfway across the bag was torn off and into the water it went! OMG!   But the bag was floating and Lutra turned around to execute a masterful retrieval.  As this scene is playing out, a small sportfish behind us is being entertained.

Lutra (Sea Otter) goes back for the floating egg bag

A few hours later as we waited for a scheduled opening bridge (the great equalizers) Lutra caught up and passed a bag of chocolate chip cookies to us via boat hook. Lucky for us they approached our stern fairly close and the bag was hooked on to the hook part. Cookies for lunch dessert! 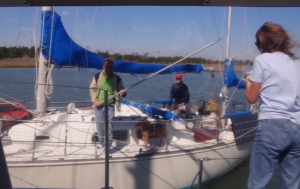 Later on we passed along info on our anchorage for the night. A convoy of four boats entered together but all had plenty of room along with a lovely marsh grass view.

You may recall our friends on MoonTide, a beautiful Shannon 53 with a too tall mast. They need 64′ and inches which can be problematic in normal conditions with certain bridges, but post-Sandy was extra ugly.  We came upon them anchored before a highrise bridge that looked to be only 63ft- at low tide. We took it slow, MoonTide watched and reported we cleared with room to spare. That tells us we may only need 62 1/2 ft. Note to selves: next time Benj goes up the mast, have him measure the instruments on top.

After dinner we officially met Patti (Captain of Lutra) and her uncle, Don. Patti is a single-hander who occasionally has company and help along the way from family members or friends. Don’s leg will end in St. Augustine.  Overall, this was a memorable day and a much-needed reminder of why the cruising life is so special.

4 thoughts on “Trick or Treat”