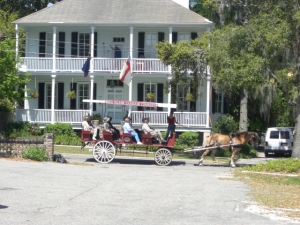 Carriage tour in Beaufort near waterfront

Spent 3 nights in bea-u-ti-ful Beaufort, SC.   This is our third multiple day marina stop and I think this kind of wild spending behavior will need to end soon- or so I fear. Twice, bad weather has kept us an additional night, but really that’s not so bad. A dock is secure and you generally have no worries about dragging; either you or another unlucky boat into you!  Beaufort is a good stop. Plenty of historic homes and enough eateries for any taste and budget- oh yes shops too, but I hardly notice those anymore. Sigh.
The trip from Savannah was easy with delightful sights for our eyes which confirmed my suspicion about the northern section of the ICW in Georgia being much nicer than its southern bad brother. Shortly after leaving Thunderbolt, two picturesque cemeteries greeted us as they sat on small bluffs overlooking the river. The dolphins were especially active and it was easy to spot mama and baby as they swam close together, often not far from the boat.
We like to arrive at marinas as early as possible to get the most for our money. A typical stay is only one night, so we want time for chores and fun stuff. On average, dockage is $1.75/ft, plus electric at roughly $5. Russ docked us (bea-u-ti-fully) alongside the face dock (a long dock that is out in front, usually contains the dockmaster’s office, fuel pumps and a pump out station.) We don’t fit into many slips and many popular marinas have these long face docks because it’s much easier for the transients/cruisers to come and go.
Several boats pulled in the same day we did; two monohulls who I have dubbed the Green Team (Patience and Midori) we’d seen several times since leaving Vero Beach on March 21, another one who was sort of travelling with them and a trawler who seemed to know the mono-folks.  We got to meet everyone when Patience invited the group to their boat for drinks and story hour (or two) and we reciprocated the next night on Ortolan.  Were long overdue for a crowd aboard and we were delighted to give tours and receive the ooohs and aaahs. Some people have never been on a catamaran, so I understand the curiosity. I think I’ve only been on a few monohulls myself.
This easy meet another boat, invite them to your boat or they to yours, show off your boats and in our case plenty of Q&A, happens so naturally that you forget it’s not like that with land folk. No matter what type of boat, or where people hail from, you can find common ground in an instant. Being new cruisers we listen and take mental notes about places to seek out and ones to avoid. Have to admit we also smile inwardly at the going aground tales, but we hope to remain vigilant with just enough wariness to keep us from that fate. If we did ever become badly aground, at least we wouldn’t heel over at some precarious degree, with fear that the rising water might find its way over the gunwales. Probably would simply have ruined our props and/or rudders!

One thought on “A weather wait in Beaufort, SC”