A nod to the sport that undoubtedly keeps way too many captains in their armchairs instead of a helm seat. Oooohh.

Wednesday is Day Five and already we have covered 395nm, 276 of them in a 46 hour period marked by little sleep, mega sailing and miniscule fuel consumption. Our eight-track tape played a continuous set of songs as we prepped to leave CT and as we worked our way to Atlantic Highlands, NJ. Our top faves included “Should I Stay or Should I Go Now”, “The Weather is Here, Too Bad It’s Not Beautiful” and the downwind run to Chesapeake Bay version of “Southern Cross”.

If the forecast changed once, it changed every darn time we looked at it. Well, perhaps that was a clue we should stop looking! Not every factor can be ideal; you have to pick the important ones and the rest will be as they may. My first boss (a shout-out to all the bosses out there!) explained to me, via a cute cartoon, that when considering three factors: quality, price and timeliness, one can usually get two, but rarely three.  Planning a trip of 276 miles, or even a day trip of 57 requires setting priorities… and then tweak them. Quite often you will settle for a day of less desirable travel conditions in order to have better ones when it matters more.

That being said, here’s how the travel days rated, with 5 stars being near perfect and 1 star meaning that we should have stayed home.

Sat Oct 13: 4 stars.  Would have been a fiver if we’d been able to sail. This was 57 miles in LIS with no fog, no high winds and my huge favorite- wavelets, so considering how crappy the conditions can be in the sound, perhaps 5 starts is warranted. The morning temp of 30° and mega slushy frost all over the boat were clear signs we needed to head south- now!

Almost enough for a snowball!

Sun Oct 14:1 star in the morning, 3 overall.  The trip down the East River, through the city , ending up anchored at Atlantic Highlands, NJ. With SW winds 20kts plus, LIS became the antithesis of its Saturday self. Our waterproofing efforts were no match for the largest wave ever to come over our bows.  We nailed Hell Gate at full current and actually touched 12kts for a second. The river was swirling like crazy and with the day being Sunday, the speed boaters joy–rode through that stretch, looping around and around.

Speed boat wake on left, swirling current center and to the right

Mon Oct 15: a 5 star hanging out at anchor day. Ms Ortolan was hanging out; we prepped for the 40-plus hour trip down to Norfolk/Portsmouth. Float plan to be sent to David right before we depart, prepare chicken salad for an easy to eat dinner, extra lash downs for dinghy, stow away loose items on counters and shelves and a list of others too numerous (and boring) to mention.

Perhaps we were seeing five stars due to the fact we were delirious; well we must have been to even consider doing the run to Norfolk in two overnights. I think I was even the one to suggest it. Given the forecast, and with all our sources in agreement, we decided that leaving Monday by 4pm would be a pretty darn good starting point for the journey. We left at 2:30pm, sails up and around Sandy Hook into very tolerable conditions.

Tues Oct 16: 4 stars, but only because we sailed all day until 10:30pm. In prep for the winds on Sunday, we’d put two reefs in the main and if nothing else, that was our smartest move so far. Shortening sail on our MC 41 is not an easy operation (the captain insists it’s easy though) and one ideally performed ahead of time if you have the luxury of clairvoyancy. The forecast proved correct and we sped along, often near 9kts thanks to NW 20kts+, gusting to 30. The waves grew but the worst part was that since they’d been from the south for days, that once the wind switched to NW the waves only managed to come from the west which meant they hit us mostly broadside.  People describe catamaran movement as hobby-horsing and we earned that label big time until FINALLY, just south of the DE River entrance, we enjoyed a true following sea and bliss.

Wed Oct 17: 4 ½ stars. We enjoyed the benefits of an accurate forecast along the Maryland coast and a perfectly timed arrival off Cape Henry to take advantage of the incoming tide. Once again that accurate forecast meant winds less than 5kts. Even though we were inching along with a full main and our large screacher , 3kts would not get us all the way up and into Norfolk/Portsmouth before nightfall. Motoring on one engine would make it happen, and conserve fuel. 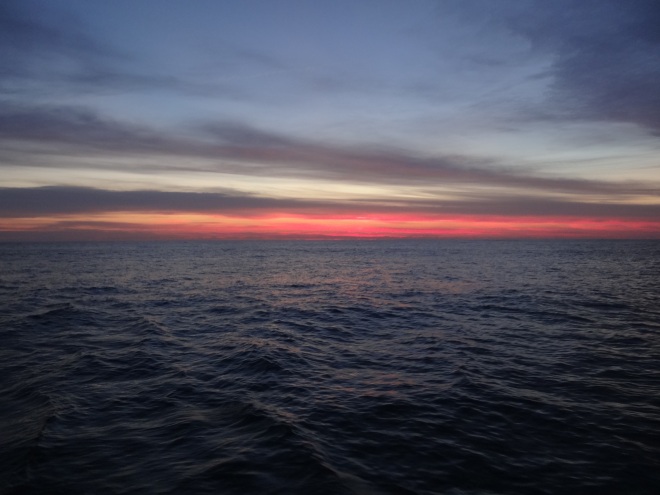 Dawn (joy!) arrives on Wed off the Maryland coast

Forty-six hours after raising anchor in NJ, we dropped it at Hospital Point anchorage on the Portsmouth side of the Elizabeth River. Normally (the past trips down) we’d take a slip at Tidewater Yacht Marina, a stone’s throw away, but with calm conditions predicted for days (and warm!)we opted for the cruiser special. It was free. 🙂