Thunderbolt Marina, quite the powerful name.  We had a spot alongside on the face dock and Russ executed a perfect docking although the wind was blowing stink. Current and wind were against us- that’s the best scenario for coming up alongside a dock with a port side tie. We stopped to chat with Cort & Carolyn of Celise/Spirit who arrived the day before and were getting the boat cleared out, cleaned up and ready for storage. Not a fun job, but after electronics troubles, fuel filter clog (a huge chunk of gunk), alternator troubles, they – well Carolyn at least- were ready for the winter cruising to end.
We hopped on the city bus and armed with a map of the historic district poked around for a couple hours. Savannah is so worth a stop. Easy to walk, with tons of shops, eateries, historic parks, buildings and sights.  Back at the dock we chatted with other CT-ites, one a small trawler and the other a Dean catamaran, before walking a short ways to Tubby’s Tank House for dinner. It’s quite the local place and we were lucky to score a table without a wait.
Saturday started off right with a 6 pack of Krispy Kreme donuts delivered by the marina. Saved two in case we didn’t get any on Sunday- which we didn’t. While planning our day, we met Andy from the Nordhavn near us. He’s a former cat and monohull owner who’s considering selling the Nordhavn for a sailing cat. He’s crossed oceans and taken the Nordhavn to the Bahamas but misses the joy of sailing, so we showed him around. Familiar with Maine Cat and was interested in the MC Power 47 a couple years ago, but it was only in the prototype stage then. The guys talked technical boat talk and I provided the woman’s point of view.
Did the bus thing again and 0ur own walking tour of Savannah for nearly six hours. That’s our bus- the blue one- not the double-decker. 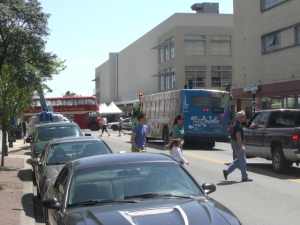 The city is laid out in a grid, with homes, shops and churches built around 24 squares. 21 remain today as lovely pocket parks with fountains and benches beneath moss-draped oaks. The historic district is expansive, covering a 2.5-square-mile area with 1,200 historic buildings.

Looking out toward the waterfront and River St.

River Street is the place to be along the water, where you can soak up Savannah’s atmosphere and fun filled ambiance. The street is paved with centuries-old cobblestones once used as ballast in ships that sailed to the port. Our lunch spot was housed in a former cotton warehouse. Many restaurants were designed New Orleans style, with balconies filled with tables for lucky diners.

Near the far end of River St stands the Waving Girl statue a tribute to Florence Martus. The story is that she lived with her brother at the Cockspur Lighthouse and fell in love with a sailor who asked her to marry him when he returned from his next trip at sea.  As he set sail, she waved good-bye with her handkerchief . Well guess what? He was lost at sea and for the next 45 years she waved at every ship that passed the lighthouse. Now that’s dedication. 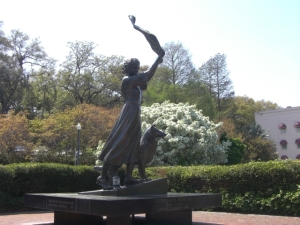 The visiting Barquentine, Peacemaker was tied alongside at the waterfront docks, offering free tours so we took them up on that. A gorgeous ship at 150′ with 10,000 sf of sail area, it was built in 1989 on a river bank in Brazil for a Brazilian industrialist. In 2000, an organization know as Twelve Tribes purchased the ship and brought her to Brunswick, GA for major upgrading and a re-design into a practical barquentine rig. Twelve Tribes is organized as a tribal people (think commune-esque) in twelve different geographical areas of the world. Each community consists of one or more households which share a “common purse” in that location, funded by whatever industries that community can establish, such as farming, cafes, stores and services.
The tall ship Peacemaker fits into the Tribe’s vision thus, “we want to be a floating microcosm of the life we live in all of our communities… a training ground to develop wisdom, skills, friendship, loyalty and good character in our young people.” Amen to that!
After visiting the Ships of the Sea museum, we set a pace and a path to take us to The Gastonian B&B where we’d meet up with Cort and Carolyn at 6pm. By this time I needed to rest my walking-sore feet at every park. During our two day exploration, I think we walked through half of the 21 parks.  Our drive to Crystal Saloon (a Savannah institution since 1935) took us down Jones St- the street that gives us “keeping up with the Jones.” The homes, close together as usual, were gorgeous and the street itself was lined with beautiful moss draped oaks and azaleas in full bloom.
The movie Midnight in the Garden of Good and Evil was filmed in Savannah; we didn’t get to do the related tour, but something needs to be saved for next time. We enjoyed Savannah and will visit again when we don’t skip right past Georgia.