Tracy, Chris and I

Some of you will remember s/v Sanuk and our (younger) friends Tracy and Chris who we first met in Vero Beach Nov 2010. They’d owned Sanuk, a Baba 30 (Hull #1) for only a short time so we thought they were joking when they talked about buying a catamaran and even borrowed one of our catamaran books. You may recall that we stopped to visit them in Crisfield, MD last October when we cruised down the Chesapeake on our way south. Yes, lovely Sanuk would be up for sale this winter. She’s spent the past few summers in the Keys, with her owners heading south to spend more time with her every winter. Ah, what a great life.
Marathon is roughly 27 miles up the chain from Cudjoe Key. No Name Pub wasn’t worth another visit so we met at Boondocks on Summerland Key for a catching-up dinner and a rousing game of mini golf- the only mini golf course in the Keys supposedly. We didn’t keep score but I’m sure the ladies ruled the night; me with the first (surprise) hole-in-one and Tracy with two. The guys, well they each managed to land a ball or two in the ponds. 🙂

The moon was full and even with the iPhone we got a pretty decent shot.

Chris won a snow cone (this place doesn’t give away free games) and grape was the fun flavor he chose.

I snuggle with Chris while Tracy cooled off in the ladies room!

Key West is well known for its nightlife, daylife, fantastic people watching, fishing, museums, crazy events, drinking and the many and varied famous and well-known people who have called it home. Two not-so-huge cruise ships seem to be in port much of the time, spilling their innards onto Duval Street (and the surrounding ones too) with regularity. At least those folk don’t need to fight for a parking spot; a simple walk, shop, eat, drink keeps them happy for hours. 🙂
Our first foray into town, before Christmas, was as much a “get reacquainted” visit as anything else. Arrive by 10:30, find metered street parking (the kind where the meter is in the middle of the block and you pay with cash or credit card for the amount of time you want) and wander around. A close-by bakery was closed on Monday, but the sign indicated Cronuts so we vowed to return another day; early too!
Lunch found us over by the docks lined with seafood restaurants, various charter/tour boats (of a more subdued nature than the Fury fleet over by the cruise ship docks), small marinas and the public dinghy dock which we couldn’t see but knew it was there. Click here to read about our Key West stop Jan 2011. 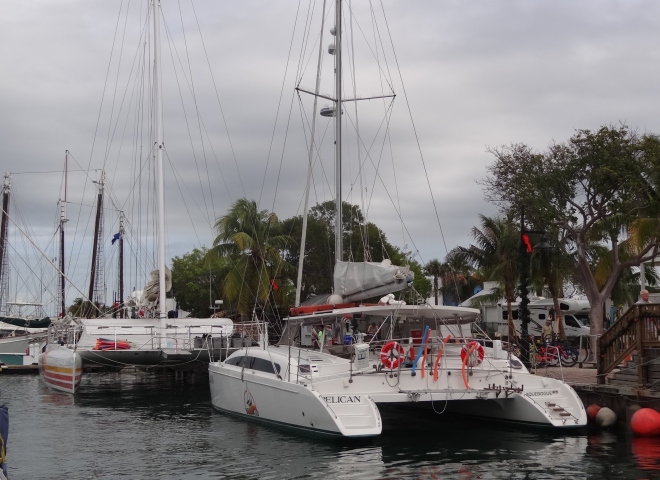 The Monday after Christmas we ventured in again. The 23-mile drive often takes a solid 35 minutes, but more if you get caught in afternoon, evening and night traffic. Route 1 is one lane in each direction between Cudjoe Key and Key West, with an occasional center turning lane and well-placed right turn lanes. Traffic generally moves along, but it doesn’t take much to slow things down to a turtle crawl.
Russ needed a haircut and we got that done on our way into town. The day’s plan was to spend time at Fort Zachary Taylor, lunch in town then check out the rum distillery; Key West’s first (legal one). In our eagerness we neglected to appreciate that this was a HUGE vacation week and multitudes would be filling the streets and parking spaces around town. But first the fort, which is basically on the beach and where we found ample parking at 10:30. The fort is tucked pretty much out of sight and I don’t think most tourists know or care about it. Kinda down on the list after all those more exciting things I mentioned at the beginning. Since we haven’t been fort-ified since the summer, the time was ripe for a fort visit. 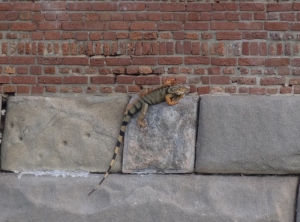 Killed some time with a walk around the fort’s water-facing perimeter. Spied these Green Iguanas which are non-native, read more on them here. 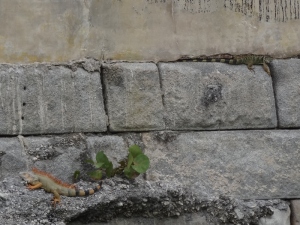 A guided tour sounded good and we were rewarded with a tour by a competent and knowledgeable Alabama woman who stays nearby in a motorhome with her husband. Before the tour we moseyed around and up to the top but I forgot to take pictures up there and later when we finished, it was pouring rain.

Key West has a long and rich history beginning with Spanish explorers who first surveyed the island in 1513. After the Florida territory was transferred to the U.S., the Navy established a depot here in 1822 to rid the area of pirates! Arrgg! By the 1890s Key West had become Florida’s richest city thanks to fishing, salvaging wrecked ships (big business) and cigar manufacturing.
So the Army looked down the field and saw the puny depot the Navy had constructed and said, “We shall build a fort to protect Southernmost.” 🙂 Construction of Fort Taylor began in 1845. Then, along came talk of secession and the beginning of war in 1861, the fort was not yet complete. The quick thinking and decisiveness of Union Captain John Milton Brannan to defend and keep the fort under federal control when Florida seceded made Fort Taylor only one of three forts in Florida to remain that way. He had no orders, so of course, wrote to ask. When d-day came and no orders, he made the right decision (can you tell I am a northerner), defended the fort and probably breathed a sigh of relief, when, days later a ship arrived with the orders, “Seize the fort!”
Originally, the fort was surrounded by water on all sides, with a walkway linking it to the mainland. The fort was completed in 1866, although the upper level of one side was destroyed in 1889 to make way for more modern weapons, with the older cannons being buried within the new outer wall to save on materials. The fort was heavily used again during the 1898 Spanish-American War.
Unlike Fort Jefferson in the Dry Tortugas (been there too!), Fort Taylor was not a prisoner fort and the two small holding cells we saw were to give the unruly a place to think about their behavior. The fort stayed active through 1947 when the army turned it over to the U.S. Navy, until eventually the inactive fort became a convenient place for storage of old machinery, cannons and a ton of Civil-war era artifacts. All this history got buried in sand, rubble and cement until Howard S. England asked why was Fort Jefferson was an historic site while Fort Zachary Taylor sat neglected and forgotten? Why indeed?

Talk about putting your money where your mouth is; Mr. England used his own resources to locate what came to be the largest cache of Civil War-era seacoast cannons in the U.S. Not until 1973 did Fort Taylor receive National Historic Landmark designation; a long time in the making. Not a very attractive fort, unlike Fort Jefferson and many others we’ve visited, but the tour is informative and the hour passes quickly. A rain shower ended things a bit prematurely but we still heard the full spiel. 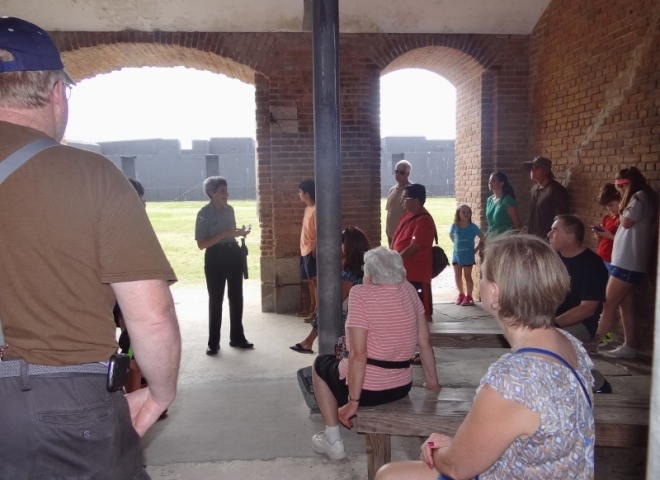 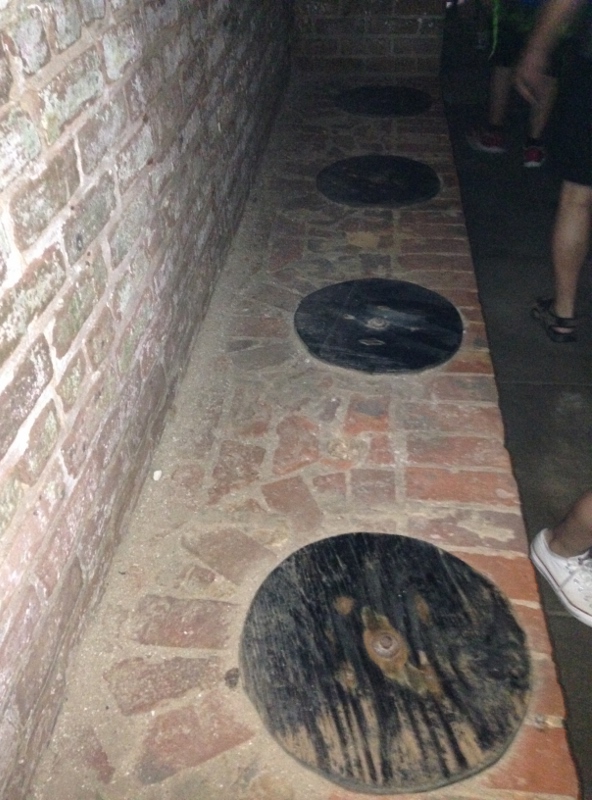 Strategically placed latrine were meant to be aided by tidal flow, but it didn’t work out that way

Throughout the year the Rangers lead a variety of programs. Annual events include reenactments, sculpture displays, concerts, a pirate festival, fort haunting, boat race and more. A few steps from the fort is Key West Beach with a shady picnic area, beach equipment rental hut, small café and a perfect view of the ocean.

Ominous rain clouds off the beach

Cruise ship makes her way in to the dock

We left the fort in the rain, making a mad dash for the car. Oh did I mention we got half drenched on a day with no rain forecasted?

Then we began the search for parking in town. Gee how about $20 for two hours, $30 for all day? Gee how about we need 3 hours and oh, you don’t have room anyway? OK. We found the rum distillery and only one driving oops that ended at the water with no good way out. Bonny is very handy in tight places, not like big Bertha Annie. Our goal was to park so we could walk to lunch and then to the distillery, and when we turned and found ourselves behind the neighborhood garbage collection truck I feared the worst. Two blocks later, he turned left and we went straight! Traffic stops a few blocks down off Duval and I spot a parking lot. I jump out and ask the totally disinterested attendant what the cost is to park. What?? $40!! Holy Margaritaville Mr. Hemmingway! As we’re about to head off, a woman who’d heard the rip-off price stopped and gave us the day’s best news- park at the Westin garage-only $4/hour and that’s not much more than metered street parking. A spot on the roof-top level was fine indeed and off we hustled to get lunch. See photo at the top 🙂

The distillery is located at the top of Simonton Street at the former site of a Coca Cola bottler. In between times was a bar- naturally. Back in the day small in-town Coca Cola bottlers could be found everywhere. I remember we had one near us in Hamden. It was on School Street, so named because that’s the route I took to walk to grammar school. 🙂 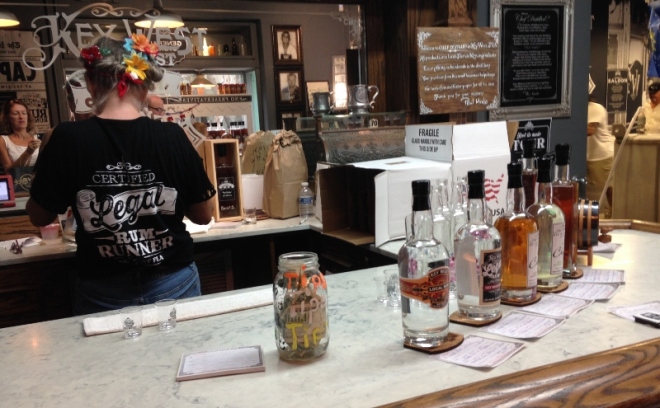 I don’t know that much about the process but these rums are distilled five times which means a much reduced chance of a hangover headache; so we were told. 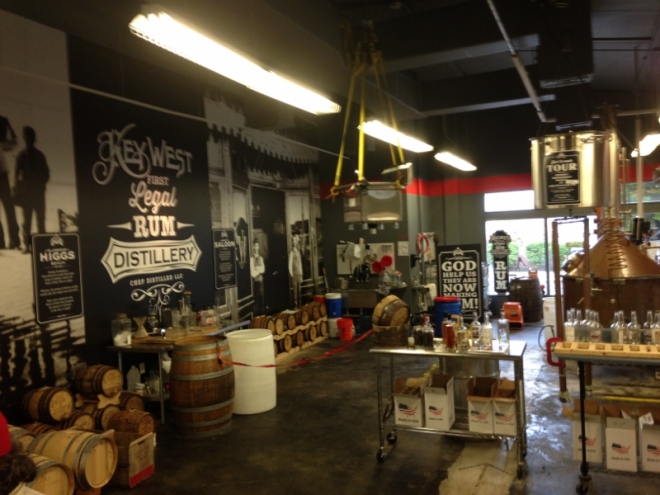 It all happens in this one room

Russ came away with the Key Lime Rum which tasted remarkably like the real thing with a touch of pucker and no sweetness. He also ran off with the day’s bottling, but got hunted down and returned to me sans loot.