From Saturday Jan 6 through mid-day Sunday Jan 14 Twin Sisters was home and vacation digs for more people than we’ve had aboard for longer than a few hours. And I’m pleased to report that despite the crappy weather that kept us inside way too much, everyone, especially Benj and Lily, rose above the disappointing conditions and made the best of things.

I mean, we folded up the bimini top on Jan 1 and didn’t reopen it until Jan 22!  (think windy and noisy) Except for the three times we were underway, no one hung out on the flybridge. The only time it was used was when Benj and Lily worked at prying coconut meat out of one we’d collected earlier in Hope Town. 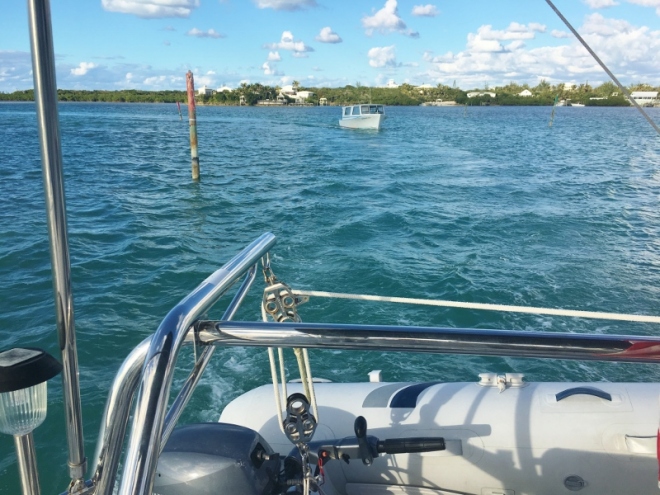 Heading into Sea Spray with Benj & Lily the day they arrived. The ferry from MH right on our tail.

On the plus side, windy conditions indicated a comfy marina slip would be a good idea. We chose a place we hadn’t been to before, over on Elbow Cay but not in Hope Town Harbour proper.

The short list of “really want to do” consisted of 1) Hope Town and Lighthouse, 2) Swim at Tahiti Beach and 3) Little Harbor/Pete’s Pub. Took all week but we made them all happen. The weather was stuck in this funky pattern where the forecast the night before was often quite wrong about the next day, so creative thinking and flexibility was key to making the most out of the short spans of “not too rainy”.

This was Lily’s first Bahamas adventure and her most time spent aboard by far, so our (Russ, I and Benj) focus was on making sure she had a good time and got a flavor of the Abacos- like lunch at Firefly !

Our view from Sea Spray Marina. After the rain, the sky makes pretty

The marina is aptly named, because easterly wind causes the spray to blow over the narrow land; soon Twins was covered in salty sea spray!

We snagged a ride to Hope Town village in the marina’s courtesy “car”- a 4-seater golf cart in good weather, or a mini van in unpleasant weather- like today. Lunch at Captain Jack’s- laid back with a harbour view and everyone agreed the meal was very good.

Lily received the grand village tour including a stop at Vernon’s (known for his breads and pies) and I picked up a container of Om Grown’s sunflower shoots to make a dish I’ve copied from Om Grown that I call Hope Town Pasta. 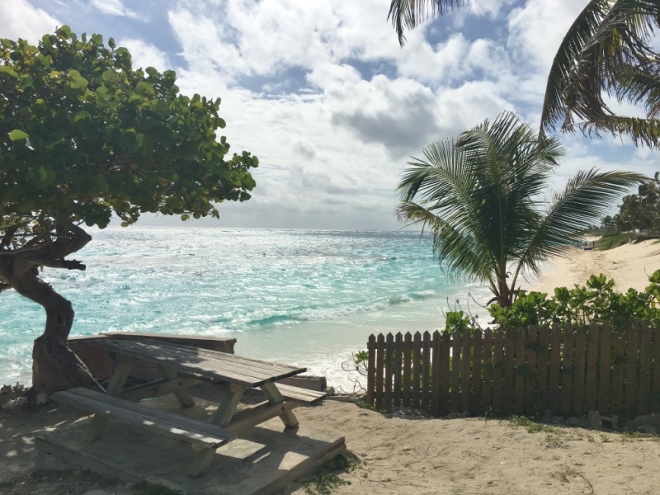 One morning a two-hour window opened up with low winds and hopefully no rain- so off they went to swim at Tahiti Beach.

The kids head off to swim, snorkel and walk by Tahiti Beach around the corner from Sea Spray

Mid-week we braved the wind and bid farewell to Sea Spray with a plan: if we could get a mooring in the harbour we’d snag that and spend two nights. If none available we’d anchor outside the harbour and dinghy to the lighthouse docks. Hopefully one or both manatees would be hanging around the marina for a lighthouse and manatee “check off the list”.

The harbour mooring goddess smiled upon us and our hopeful guests, and presented us with a choice of two moorings; we chose a double green which we knew belongs to Lucky Strike. Truman has well-maintained moorings, second only to Captain Ron’s in our opinion. A two-day stay in Hope Town was guaranteed as was a lighthouse visit.

Benj & Lily played so many games of cribbage I lost count. Other inside activities involved meal prep, snacks (these two eat more than we old folk), happy hour appetizers and of course “your beverage of choice”. Lily liked to hear what Russ and I were having and often chose based on that, with a Barcelo Blazer a regular (ok maybe twice) request. Licor 43 (a Spanish liqueur so Barcelo might be short for Barcelona), tequila and a dash of chocolate bitters.

Friday found us underway toward Marsh Habour and the same slip at the marina we’d left on Saturday. Tying up and casting off is always easier with our son to help. Lily was the perfect guest in that regard and knew to stay out-of-the-way (observing with a smile and chuckle no doubt)  as we handled lines and fenders. 🙂

They biked into town and returned with coconut bread and DONUTS from Da Best Yet Bakery. Saturday we enacted the plan that would enable us to get to Pete’s Pub in Little Harbour and more! If not by sea, then by land! Benj dropped Russ off at the dinghy dock across the harbour. We’d booked a rental car from USave Auto rental which is at the airport but also operates a second location a stone’s throw from the dinghy dock.

First stop was the bakery for more donuts 🙂 then Maxwell’s. After unloading back on Twins, we headed south down the Great Abaco Highway with Google as our guide. Stop #1- Pete’s Pub for lunch and see the sights. 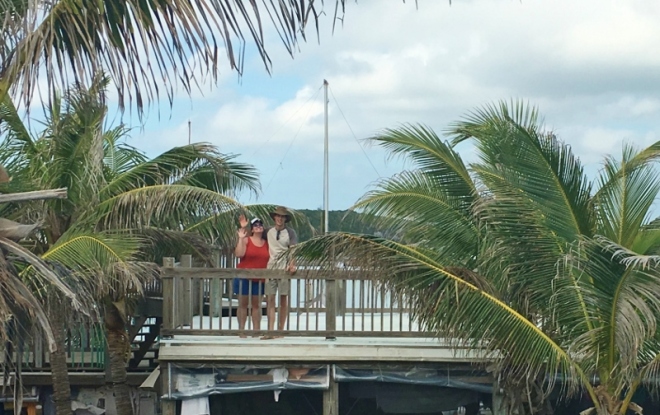 Our son is not known for owning material items in excess (only food perhaps!) and I always (still do) had to encourage him to replace worn out items- ones he’d re-stitched or repaired many times. So when he arrived, a new pair of sunglasses was a hot topic and Benj made a point of showing me, saying he knew I’d be surprised and pleased that he bought new ones. I immediately pulled out my latest pair (because I need 3), recently acquired in St Augustine and we had a great laugh. Identical except that Benj’s temple pieces were longer than mine.

Matchy shades! Where does Benj get his good taste?

Cherokee Sound: sits a few miles south of Little Harbour and lays claim to the longest dock in the Bahamas thanks to the very shallow waters surrounding the tiny settlement. Most cruisers never go there by boat but in our nifty rental car it was easy. I’ll take the easy route and quote from the Destination Abaco booklet to give you the scoop about Cherokee Sound.

“In the early 1780s, Cherokee Sound was founded by Colonel Thomas Brown along with American Loyalists from the Carolinas. …the settlement was given the name Cherokee Sound by the Colonel because he was once one of England’s liaisons with the Cherokee Indians. Although Cherokee Sound has been described as the most geographically isolated settlement on Great Abaco Island, the Loyalists were attracted to the availability of fresh water and the protected harbour that it provided on the southeast coast of Abaco. There is also a long barrier reef accentuated by cays that protect the northern side of the island.”

That may have been acceptable “back in the day” but the water was often (think “not at high tide”) too shallow for larger vessels. And residents had to cross a shallow bay in a small boat in order to reach the mainland. Prior to 1990 the 15 mile road to Marsh Harbour was gravel before being paved. By 1997 a new road with an over-water bridge was built and paved which allowed residents to drive to the Great Abaco Highway.

Cherokee’s economy was driven mostly by wrecking, fishing and farming in the 1800s. The local Methodist church was built in 1827 and in 1988 the community erected a monument dedicated to the Cherokee fishermen and their smacks (fishing vessels).  Because the fishing voyages would often take six to ten weeks, the men had many opportunities to visit various islands and cays throughout the Bahamas; thereby giving them a vast area to explore and find shells to bring home to their sweethearts and families. As a result of such an extensive shell collection, a tiny “Gifts From The Sea” museum recently opened up free to the public. It’s locked but you only have to call the number on the sign and one of the settlement’s 160 residents will come and open the doors for you.

We didn’t have time for the shell museum but we did see the tiny yellow building as we drove through the settlement’s one main road. 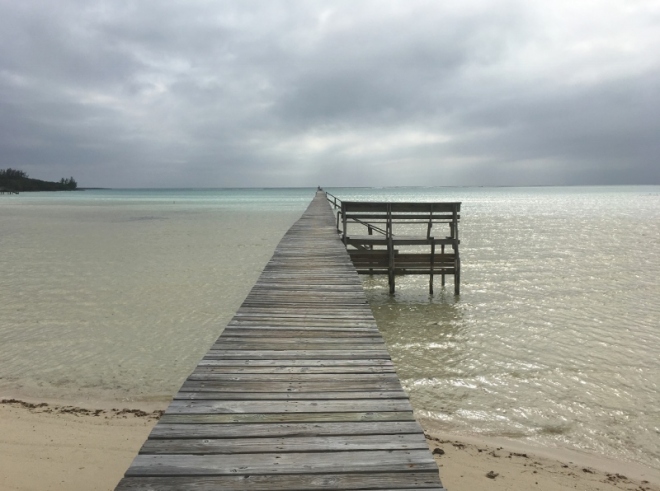 The long view of things in Cherokee

Father- son moment in Cherokee. Notice the lower level sitting area for a leg dangle in at higher tide

Much further south sat our next and final stop of the day, Sawmill Sink Blue Hole. First we had to backtrack to the Great Abaco Highway and then drive, oh at least another 10-12 miles south. Just to be clear, “paved road” doesn’t mean quite the same as in the States; 40mph is a safe speed. Plus, the car did NOT have a spare tire and per the contract we were responsible for all costs should we incur a flat. No way do we want that adventure today!

The blue hole had to be located on Google maps so we could find our way there. If you recall from the Marsh Harbour post, the roads were begun by Owens-Illinois who created primary and secondary logging roads. We had to be able to find the turnoff onto the correct logging road, then drive west until we’d come to what we hoped was the obvious spot to park near the blue hole. Thanks to Google we did not get lost!

Benj and Lily brought swimming gear in case conditions permitted, but the afternoon got cloudy and the blue hole didn’t look as inviting as they’d hoped.

The parking spot is just that, a slightly wider tiny section of logging road with an obvious path leading to the blue hole.

Benj and Lily claim they saw (up close) a hummingbird, and well Ok I trust they did, but we didn’t see much in the way of colorful flowers. Russ saw a few like the below. 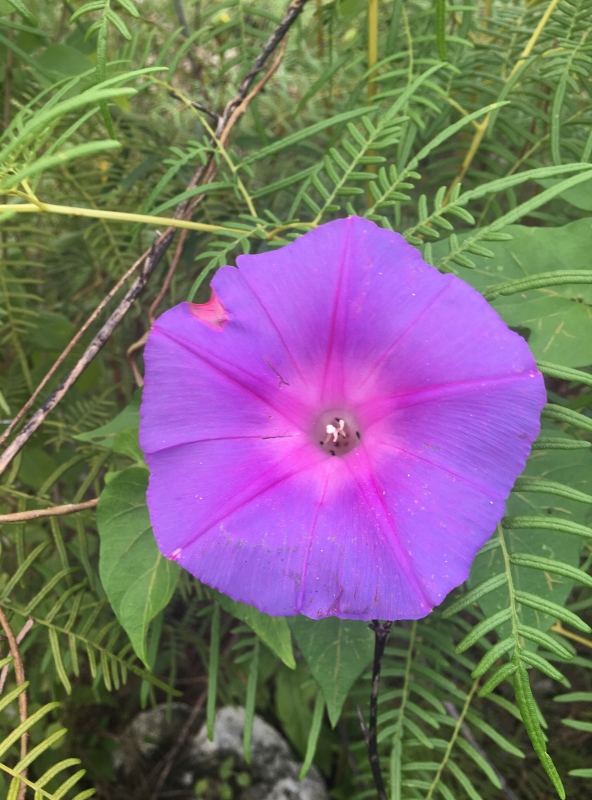 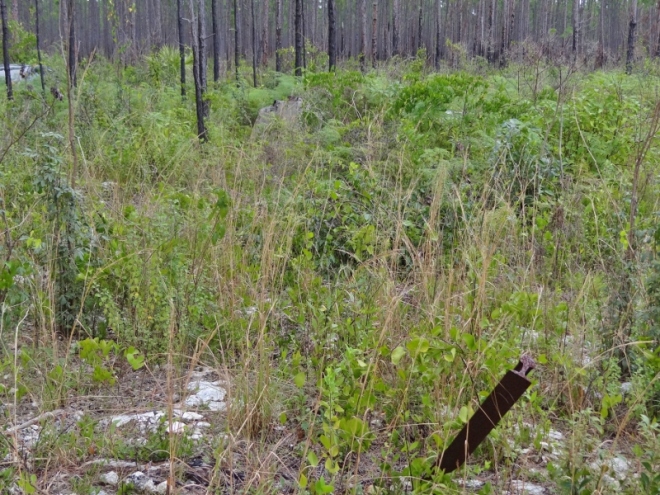 As usual, the drive back didn’t seem as long as the going and in this case it was shorter; just a long haul back up the Highway. Was a fun day exploring places we’ve only been by boat and others we would never get to except by car. The day’s weirdest happening I will leave out, but if Russ or I remember, we’ll be sure to tell the bizarre tale in person.

Sunday was departure day and we all enjoyed a leisurely morning as the flight wasn’t until almost 2pm. Did we take them in the rental car? No, that timing didn’t work out. But it’s more fun to hail a taxi!  You get on VHF channel (06 I think) and you say something like, “taxi pickup needed from Jib Room to airport.” Keep it short. Immediately a taxi will respond with “taxi 16, five mins away.”  Then you acknowledge that taxi number and get to the pickup spot if you aren’t there already.  Writing about it doesn’t give you the real flavor though as the locals speak fast, with an accent and in the case of taxis, more than one may try to get the ride. If number 16 says 10 mins, but another chimes in with 5 mins, you can acknowledge the one you want. If you have a favorite taxi number you can just hail “taxi 123” on the VHF.  Different here, yes, but it works well.

And then we were all alone… to put Twins back to the state of two aboard, deflate air mattress, move Engel freezer back down, clothes back on the rod above the bed, etc. Keeping busy was good as we adjusted and of course began checking the weather to see when we might be able to head out of the Abacos and down to the Exumas.