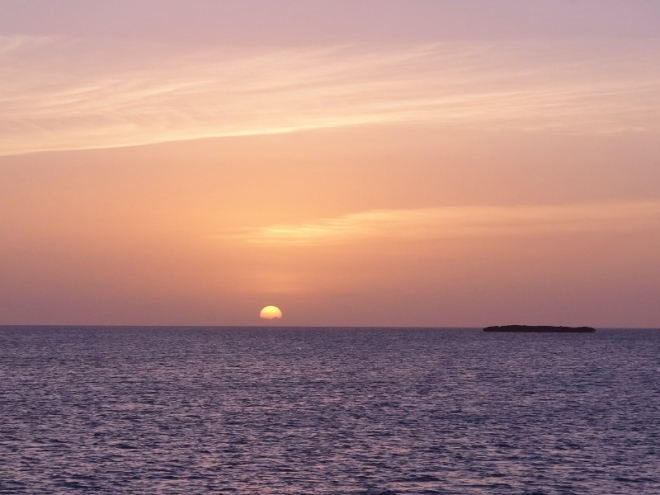 Why oh why do we do this fast paced race down the Exuma chain of lovely cays, islets and islands? Method to that madness. One reason is that usually in January and early February the low pressure cold fronts descend upon us at least once a week bringing a day or two of relatively calm conditions, then BAM the wind shifts quickly from SW to N, often at night and upwards of 20kts. If the wind direction out of the SW to W was guaranteed to be very low, you’d just anchor to be protected from the strong North-ish winds and all fine and good. But that’s not how it goes and anchorages with good holding and protection from SW to NE are far and few between in the Exumas; or anywhere in the Bahamas for that matter.

However; if we can make the trip from the Abacos and get south to Elizabeth Harbour, aka George Town, and avoid a clocking cold front, then we have the perfect hidey hole behind Crab Cay, aka Red Shanks.

Here’s how we made the 225 nautical mile trip from Marsh Harbour to Elizabeth Harbour. Lots of prep of course and ideally provision. Russ has started a new technique to defrost our small fridge, using the hair dryer and moving a few things out-of-the-way, covering the food with a pre-chilled towel. Gets the job done faster and the fridge rebounds back to normal temp better.

So then we are ready to stock up, but wait… we are leaving sooner than expected..waaaa no grocery store for us. Oh well. 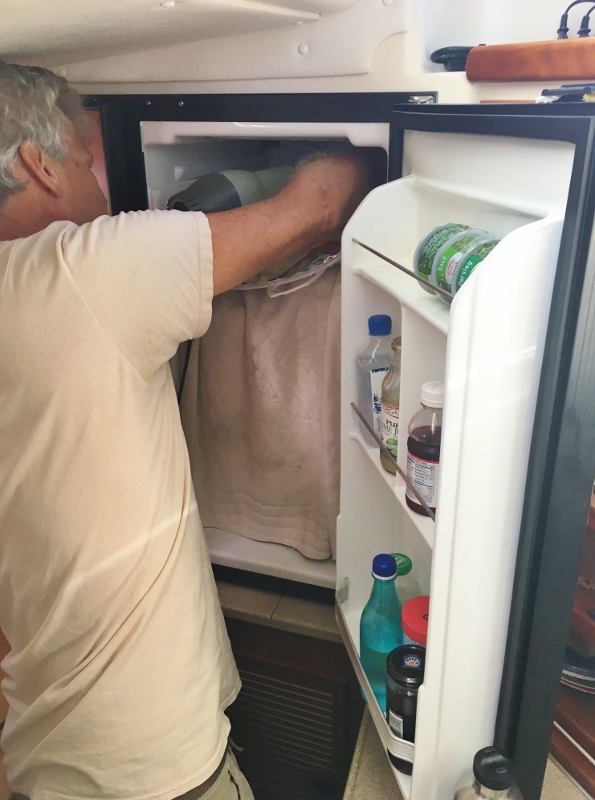 Day One trek: 75nm from the MH Marina to the anchorage at Royal Island, Eleuthera. In just under 7 hours we moved along reasonably comfortably in 4 foot swells about 9 seconds apart (in the ocean). Low winds as forecast. We were happy, but the sailboats probably not so much.

Day Two: decision time: One option was to spend a couple of nights in Spanish Wells but doing so would have greatly delayed our George Town arrival, so we braved a sloppy and bouncy trek from Royal Island to Highourne Cay, Exumas. A windy, squally Sunday was forecast so we took a slip for two nights after fueling and catching up with Stevie who remembers us- mostly because he has an uncle who lives in CT.

The marina was empty; a few yachts and sport fish came and went. Saturday night we went up to Xuma for dinner. Only one other couple there. Then we discover that tonight is the big surprise birthday party for the resort’s manager- but so far in advance that he was really and truly surprised. Since so few customers were expected for dinner, the surprise was held tonight and boy they had fun. We were encouraged to join in and the extra wine and beer we received at no charge was a nice touch.

So, what do ya think? Hitch a ride? Nah, too small.

We toured around on loaner bikes the next day, stopping at a few beaches and admiring the spruced up herb garden. 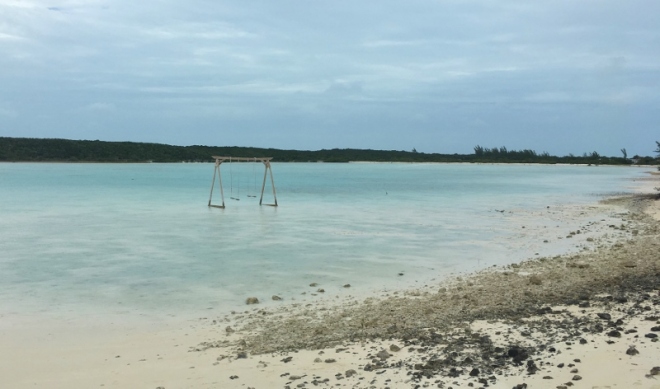 In the shallows past the marina docks

Black Point (roughly 55 miles north of George Town) is a mandatory stop and you may know exactly why: Ida’s Rockside Laundry, and a haircut for Russ, spiral filled coconut bread by Lorraine’s Mom and lunch at Lorraine’s Café.

Around the corner is Little Bay where you can walk across to the ocean-facing beach. We’d planned to move there in the big boat but the wind direction would have made for a rolly night, so we went back and forth by dinghy.  I was surprised at the scant quantity of shells and the only reason we picked up any sea glass was that at low tide you can reach in to the low tide sand shelf and grab what the waves bring in. 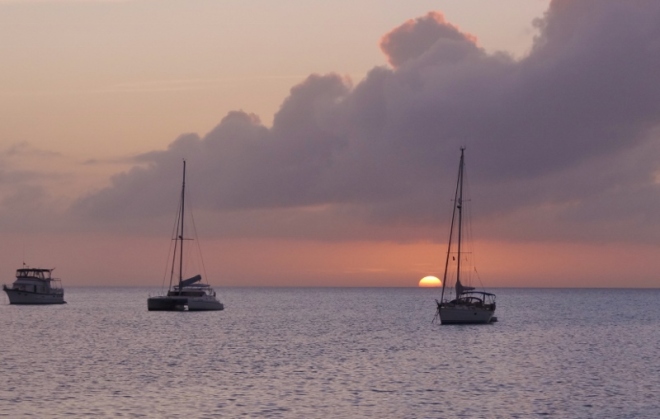 The trip from Black Point to George Town involves going out a cut into Exuma Sound (which is a Sound and not 100% Atlantic Ocean thanks to Eleuthera which lies east of the Exumas but only part way) and back in Conch Cay Cut at Elizabeth Harbour. Conditions would be OK, but not great. Fishing line in but my hopes alternated between hoping to hook one and hoping not. We were not alone out there by any means nor were we alone in ending up “fish-less.” The window would close tomorrow for boats wishing to get to George Town in reasonably comfortable and safe conditions.

We snagged a spot close to shore right off the Monument, near Cort’s Place. Their center console, aka a walk-around, was gone. Minutes after Russ says, “They can’t miss us”, the boat zooms by- blind to our existence!  Three men all too focused on the “project-of-the-day discussion.  Well, I resorted to shouting over to them and they came by to greet us and tell about the project. Cort’s friend and freshmen year roomie (so they go way back!) Gif, comes to visit for at least a week early in “the season” to exercise his carpentry skills and bask in the warmth that presently doesn’t exist in western upstate New York.

Next morning we took the big boat across the harbor to Kidd Cove, raided Exuma Market and happily noted several store improvements. Then headed to hide out in Red Shanks for several days (ok, it was a week) of big winds. So what else is new? That’s how it goes here in winter. 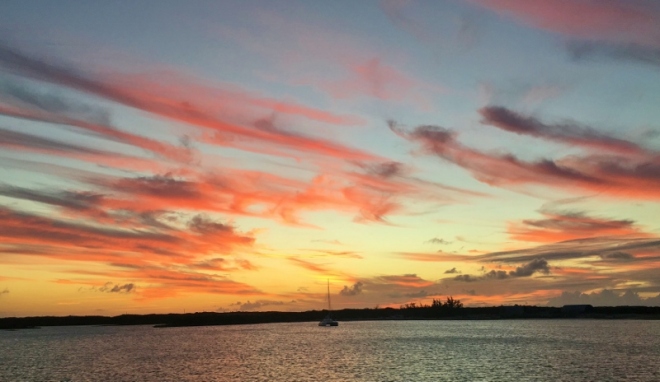 Nature applies the red crayon to a scene that 15 mins earlier was only yellow.