Although a fair number of cruisers anchor in the protected harbour that’s ringed by marinas, restaurants and private docks, it’s the free anchoring, easy access to provisions and a myriad supplies that’s the draw, not the scenery. Marsh is the country’s third largest city- behind Nassau and Freeport I’m guessing. Marsh Harbour also boasts the only street light in the Abacos.

The city was founded by American Loyalists in 1784; growing from an initial population of a few hundred to more than 7,000 residents today. The infrastructure is more substantial than any other place we’ve visited in the Bahamas (with the exception of Nassau on New Providence) and Maxwell’s Supermarket definitely feels like a stateside grocery, albeit closer to a Piggly Wiggly than a Wegman’s!

Ok- now on to our Sea of Abaco wanderings. Remarkably settled weather held out thru the end of December so we made the most of it. A trip down to Little Harbour is a must and there we performed the final act of identifying ourselves as Florida residents; removing our CT dinghy numbers and replacing them with FL registration numbers. Once again, thanks to BoatNumberPlate it was easy, even the removal.

Don’t worry, we made time to beachcomb and enjoy lunch at Pete’s. The foundry had just finished up a commissioned piece that we admired as Pete and his chief foundry guy polished it up outside the Gallery/Gift Shop.

One of our last out and about stops before needing to hide out at Marsh Harbour Marina for the approaching cold front (and guest preparations) was near Snake Cay. The holding is very iffy near there so we anchored a bit further  away and our trusty Ultra dug in well.

I watched as three dolphins headed our way, perhaps drawn in by the hum of the watermaker. 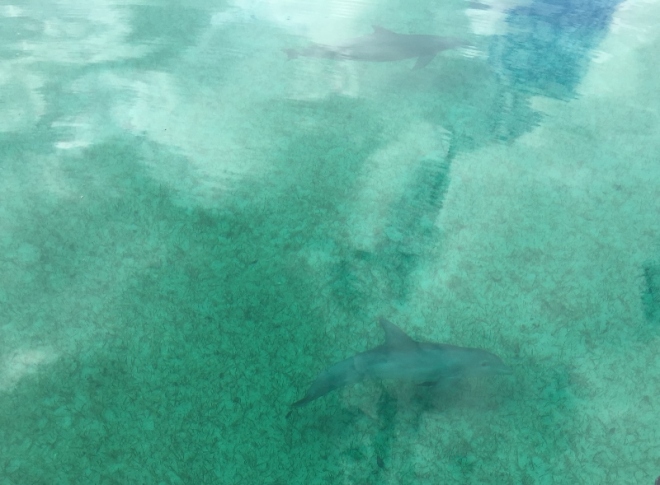 The opening next to Snake Cay that leads you into a mangrove-lined lagoon is narrow and when the current is full force you notice! Luckily we entered about an hour past low. Higher tide is needed if you want to meander south from the lagoon area. 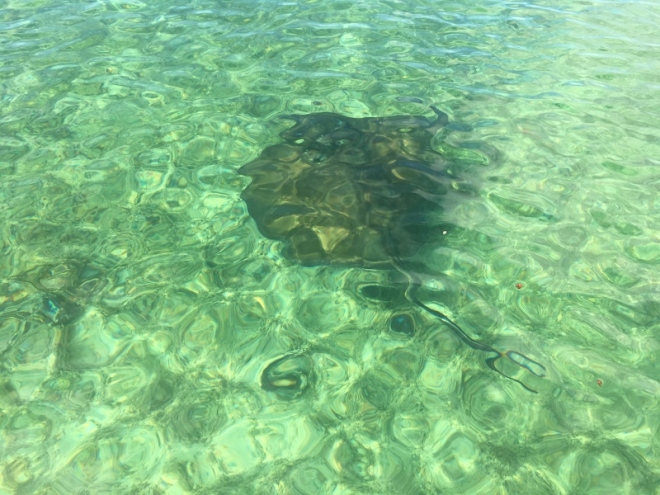 Ray in lagoon behind Snake Cay 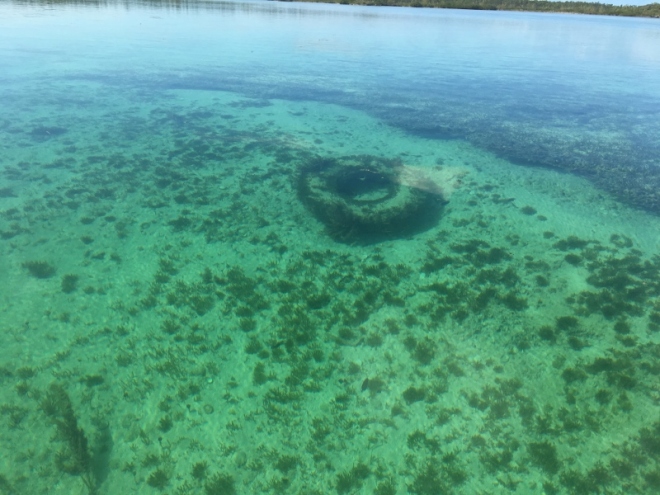 Snake Cay lagoon has a varied bottom with lots of shallows and is very deep near entrance. Swift current creates sand steps that you can see on calm days.

So we next headed into Marsh Harbour Dec 31 to the marina that would be home until Lily and Benj arrived on Jan 6. As we approached the wide and marked entrance into the harbour, we noticed the below scene off to our right in the middle of the Sea of Abaco. The start of a race? A New Year’s Eve tradition? No way Jose!

Most but not all of BucketLust cats- drone photo shoot?

We got closer and boats were still coming out of the harbour, so could read the flag that said BUCKETLUST. Googled that and it’s basically an organization where twenty-somethings charter catamarans in exotic places and ski at top resorts. The cats hold 8- 10 young people and the ratio HAS to be 50/50 male/female. The charter captains are local charter captains that the lead organizer of each boat has to hire. The lead also has to fill the boat with that 50/50 ratio. And then they all descend upon the chosen location and boy I’m not sure I want to know after that!

They picked a bad week this time; very windy much of the week. The itinerary looked good, lots of fun stops but not sure all were possible with the week’s lousy weather.

Our slip at the marina is closer to shore due our draft so we had extra wind and wave protection, but there’s one direction that really blows the waves into the fairways and yep we had some of that. 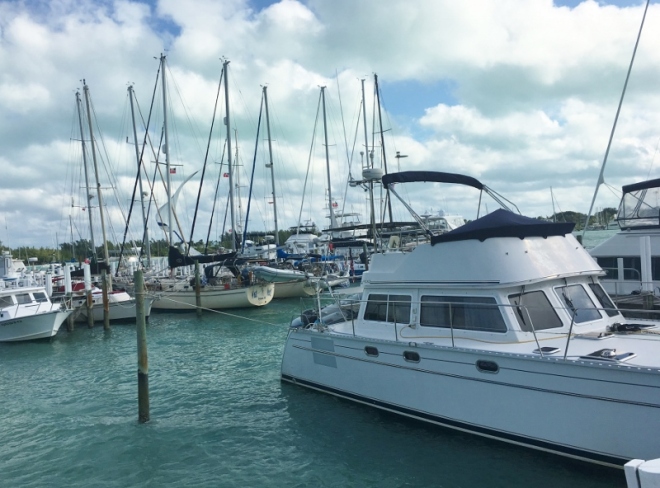 Someone’s sail on the dock across is trying to go sailing! 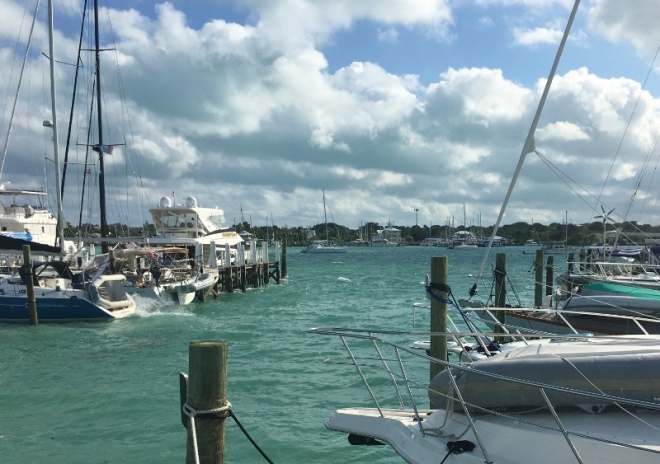 Became very wavy in MHM fairways with west-ish winds. Note the wave splashing at the stern of the sailboat

In between the wind and rain we cleaned inside and out, loaded up with as many provisions as we could, prepped the spare berth by removing contents to new and unusual places, and baked, baked and baked!

Arrival day’s forecast was so-so, but worse was the next day’s and you know we don’t like to be out in 20kts+ ! Not doing that with guests either, so plans were finalized (after much and lengthy consideration) to get to Sea Spray Marina on Elbow Cay Saturday afternoon. Hopefully the trip would be tolerable and the worst one we’d have to make all week. Excited to see Benj and Lily?  You bet!!