We often joke about being in a creek for the night and how that is so budget friendly, because where do you spend money up a creek? Maybe if you need that paddle, but otherwise you stay aboard or take Fido to shore a few times assuming there’s a place to land the dinghy.

Since we have oodles of time to get to Myrtle Beach why not take things slow and see what new adventures can be stirred up? Preferably not of the running aground kind which sure would stir up the muddy bottom!

Hilton Head got the pass-by every trip and we looked at the situation again (marinas, location) and it still came up short. But the island that lies close by is Daufuskie Island and it had what we were looking for. After departing Jekyll Island we next stopped for the night in New TeaKettle Creek and after that was Breakfast Creek; we tried to act appropriately. 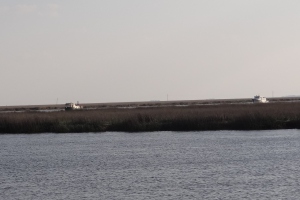 A high tide the other boats are easy to see 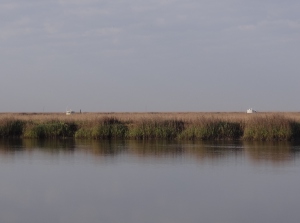 At low tide the boats disappear into the marsh grass

Friday would find us crossing the border (the Savannah River) into South Carolina and happy to have transited through Georgia without mishap. A bunch of other cruising boats who we’d been seeing (and hearing on the VHF) for the past week were feeling pretty good too. Unfortunately when you are 6’ draft boat you need to be darn lucky, use enough tide or have an up-to-date online cruising guide (like you know who).

Immediately after crossing the Savannah River one enters Fields Cut where you must hug or strongly favor the red marker at the southern entrance (the less tide the more hugging) and keep to that side before moving to center. Then when you are about to exit at the north you’d better hug and kiss the green side if you don’t have enough tide help. A 7 to 8 ft tide range is typical in these parts. The daymarks could be moved, but why do that when you can cause excitement and backups when a boat goes aground because they don’t know the special path? So stupid.

We decided to begin our day at 11 am which would allow us to run on one engine and transit Fields Cut at mid-rising tide. Our day would end around 4pm and when we looked for a good anchoring spot (a creek, small river) we found a spot in the New River just off the ICW and across from Daufuskie Landing. A reviewer mentioned taking your dinghy to the great floating docks and enjoying a meal at Marshside Mamas. Well if that wasn’t intriguing!

Shortly after we upped anchor, uh oh a boat had run aground at the north end of Fields Cut. Where the rivers bend and snake around too much, skinny cuts are created to bypass the long loops which allows you to move along north or south in a straighter line. Shoaling is a problem in many of these cuts and the situation has worsened measurably even since 2010. So this fearless monohull attempts to transit the cut on a falling tide. TowBoatUS is called and he has difficulty getting them off- over an hour. The Coast Guard sticks their nose in and several others sneak by on the green side with no problem, but with caution. One boat comes along and we hear this “Are all these boats aground?” No, just lining up to get by.

Marshside Mama’s, in business for 18 years is simply the coolest place with funky décor, mostly outside seating and happy wait staff. Our meals, oysters and drinks (their rum drink is the Marshside, of course) were outstanding and we’d have returned the next night in a heartbeat.

Side Two and some lady jumped into the shot 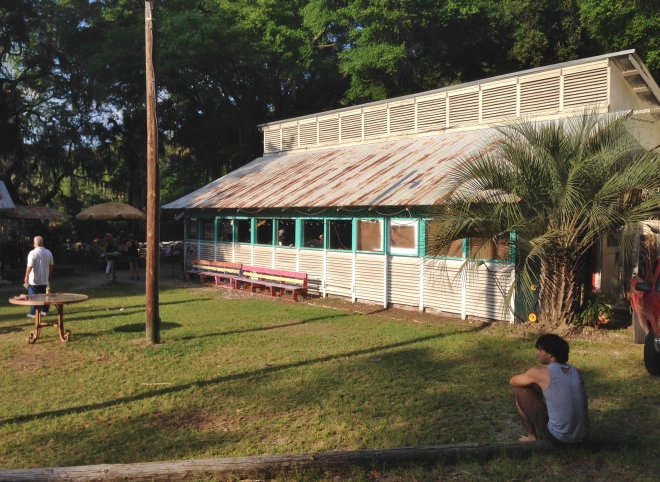 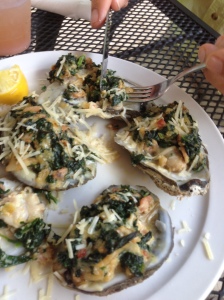 Oysters Fuskie- excellent. I think the greens are collards 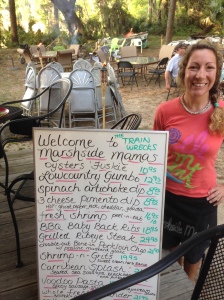 The menu board and Jen our waitress

Russ selected the ribs and I had the Shrimp and Grits which was so fresh and deelish.

Our table and one other was on a tiny stage off the ground. A brush fire with ample smoke helped keep bugs away.