Sandwiched between Cumberland Island to the south and St Simon’s Island to the north, sits Jekyll Island. Former winter cottage site of the wealthy who may have also owned a summer cottage in Newport, Jekyll is a lovely place to explore with over 20miles of fantastic bike paths where the steepest hill might be a 10” climb over a ¼ mile. Flat and perfect for this non-biker chick.

Jekyll has been on our list for years and this year with extra time available we made it happen. From arrival day, Monday 4/21 to the end of Tuesday we biked as much of the 3-mile-long island as we could. The southern section was closed off due to the recent monsoons; flat terrain equals flooding and the south part sits lower than the rest.

The paths take you through marshes, golf courses, along beaches, through and near the Jekyll Island Club, into the historic district, past cemeteries and the only island fast food joint, DQ Grill and Ice Cream.

Jekyll Harbor Marina has a long face dock laying parallel to the ICW; easy docking with competent dockhands even with current and wind. The marina provides free bikes- imagine that! Their wi-fi was excellent; this is becoming a trend at marinas lately as they upgrade their systems.

So let’s tour the island. We’ll begin at the marina, head along the west (ICW/Jekyll Creek) side, around the northern tip, along the east (ocean) side and then we’ll finish up with a few interior stops.

First we get out our trusty map which shows the bike paths, roads, places of interest and dining options.

The marina is to the right of the 3-circle cluster, at the white road where the bridge crosses the creek; we’ll be heading to the left to begin. Bike paths are blue.

A sailboat heads up Jekyll Creek-probably at mid tide or better. Brunswick bridge in background.

Croquet on the lawn of the Jekyll Island Club 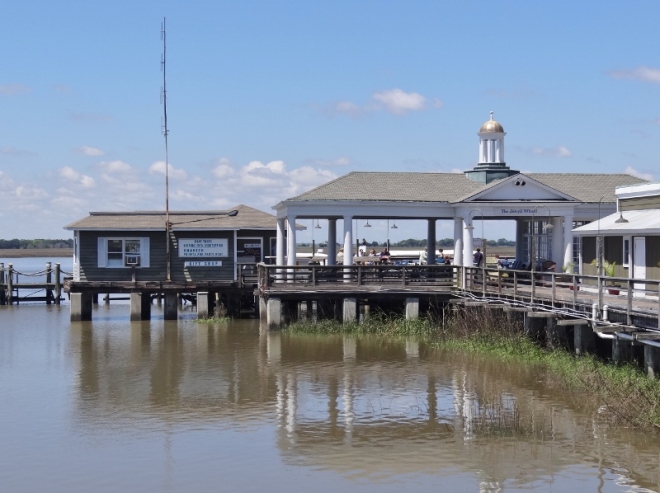 The weather was so lovely, warm but not too, and the ambience so perfect that we ate lunch here both days. Monday’s special was one pound of Georgia peel-‘n-eat shrimp with your drink choice. The shrimp was melt-in-your-mouth heavenly; so fresh and cooked to “just done” perfection. Our usual island libation choice is the rum punch and the Rah Bar’s Rum Smash was excellent. 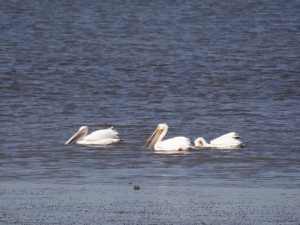 At first glance we thought “swan?”, but no, just white pelicans acting like swans

While all the bike route is clean, wide and well-kept, the sections through the historic district are especially neat and tidy. This photo below is a great example of what we found along the route. Covered trash cans, water fountain, bench and an informational sign. Signs explaining the marshes, birds, small animals, historic sites and such were well placed (and well spaced so you could rest frequently if you wanted).

The perfect spot to rest, read and quench your thirst. 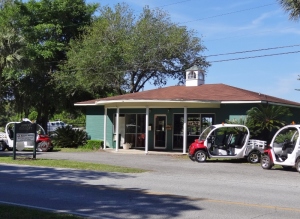 Horton House. Constructed of tabby and the only one of its era remaining

By one of its two fireplaces- can see the exposed tabby

Major William Horton, an officer under General James Oglethorpe, was the first Englishman to purchase land on Jekyll Island. He eventually purchased nearly 500 acres and built the Horton House to serve as a British Empire outpost and his personal residence. Photos showed it with porches and an upper deck.

If I recall correctly, from our museum tour (no photos allowed) this was the second home. His first was burnt by the Spanish (?) about a year after he built it. Think we’re in the 1700’s here.

Each week the human crew of m/v Acapella, otherwise known as ActiveCaptain, sends out an email that deals with a technical topic, new feature of, or future plans for the best interactive cruising guide we’ve found, ActiveCaptain. The second part of their email is the Defender First deal of the week and the last but not least section is where they mention where they have been and a link to their blog, Talking Paws.

They also, of course, enter reviews in AC about places they’ve stopped at and a recent one was right here at Jekyll Island. A place Karen said not to miss was Driftwood Beach. Not really driftwood, but uprooted trees strewn along the north tip of the island. Another planet for the look and feel of those snarled tree trunks and massive root systems. Some rocky sections and little pools contained shell pieces and a few pieces of sea glass. 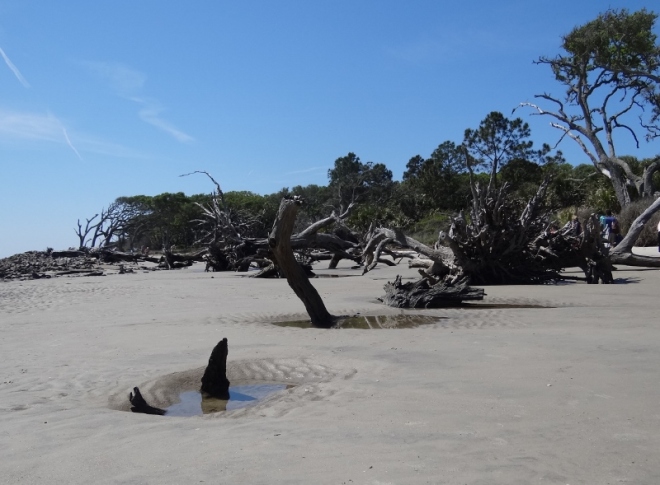 The doc was in!  We got to see shell repairs in action up close and personal behind plexiglass. The center was beautiful; well designed and fun to explore.

Baby turtle, Glory has a decent chance of survival

The Glory Boardwalk mentioned in the “Meet Glory!” write-up was built specifically to film several Civil War battle scenes in the movie, Glory, filmed on Jekyll Island in 1989. And yes, we’ve added it to our movie list. Because it’s in the southern part of the island we missed it. 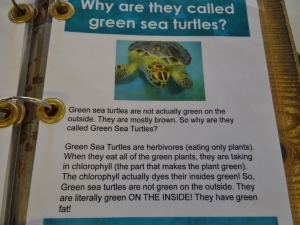 Did you ever wonder why?…..

Could not resist a photo of these, but I did resist the urge to buy one

Crossing the island was more rustic- watch for gators here

Our tour ends back at the marina where this tug and barge come through in daylight. Because the ICW in Jekyll Creek is so narrow, they usually do this at night. Not only is the creek narrow, but in a couple of places,  if you don’t know the “secret path” you could easily run aground.