Around mid-March the Abacos begin buzzing, filling up cottages, hotels, marinas and harbors with folks looking for a good time at a free concert (or two) given at Nippers on the beach overlooking the Atlantic.

Free concert with an ocean view and tropical breeze

George Nowak, aka The Barefoot Man, or Foot (to those in the know) has been a prolific producer of irreverent tunes for over 25 years. Songs you have never heard on the radio, or SiriusXM, but you might have run across them on iTunes or some other source of downloadable MP3 music. Several boats we knew had plans to attend, but our land friends would not be there this time. We met two terrific couples last year, who’d been coming for years for a weeks’ stay on Great Guana Cay, capping it off with the Barefoot Man concert series. This year, other fabulous vacations would keep them away, but we promised to claim their sacred spot and dance wildly on the tables. Well, Russ may have promised, but not me (wink, wink). 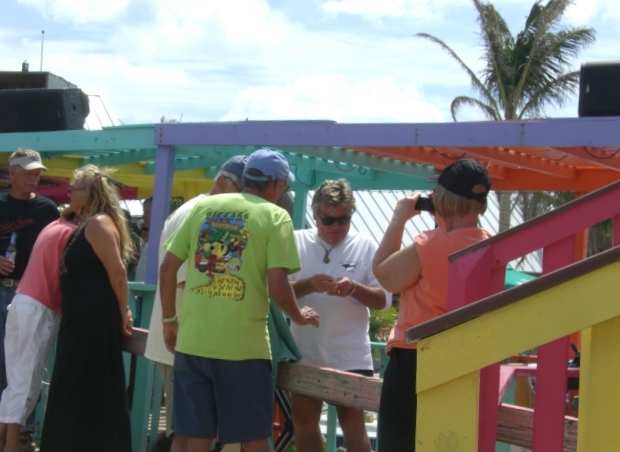 Over the summer we beefed up our collection (discovered Foot six yrs ago), adding “Alice”, “She Loves My Deck” and the very clever “If You See Kay”, to tunes such as “The Ballad of Billy Clinton”, “Gay Cruise Ship” and “If They Cut You Off at Nippers.”  Another song twisted into a Foot fave, is his “cover” of Toby Keith’s “Red Solo Cup”, then adding Foot’s stanza, “Double D Cup.” Oh lordy!  He also sings about hurricanes, ferry boats and fig trees.

Lori wonders who the F is Alice???

who cares? when you’re with friends, at Nippers….

The weather was beautiful, wish you were here! Polar Pacer showed up and we said our good-byes as they were heading out next morning from north Man O War cut to Fernandina; not a double overnight! Not for me; I dread one night.  Magpie made it too and Laurie and I burned a few frozen Nippers calories off on the dance floor- and you know I use the words dance floor in a loose way; it’s the dance deck… when you want to dance, or just pack ‘em in like cattle to stand around.