A recurring theme this season, at least as far as the Bahamas are concerned, is one that finds us leaving earlier than planned. So with that thought in mind you won’t be surprised to hear that instead of a leisurely stop at Green Turtle Cay for several nights of docking and dining at the Bluff House to celebrate Russ’s birthday, we found ourselves back in Florida!

After concert day the weather was allowing several beautiful days to grace us with the ability to be, go and anchor anywhere before decisions had to be made. Tried in vain to remove lobsters from their hidey-holes one last time; if they think we won’t be back, that we are defeated- wrong! you clawless crustaceans!  Got a few tips from s/v Malolo, a Manta 40 who anchored near us in Fishers Bay; but luck plays a big part in this hunt. When one can only go down 8-10 ft it limits your hunting area.

The Fish Cays are correctly named: saw fish, no lobsters.

I had to smile at one difference between this year and the past two. Before, if Russ met another boat and came back saying something like, “I invited them to stop by” I would have launched my 20 questions barrage then hustled around to tidy up and make the bed. This time- and mind you I get no credit for this improvement- I smile, say, “OK”, listen to the intel gathered while continuing my activity, giving no thought to having Ortolan look presentable should they pop over. Plus, in the two minutes it takes for them to head over, we can make the bed (straighten the comforter) and move stray shoes out of the way. So much easier on my nerves. 🙂

Archer Cay proved to be a scenic stop with a surprise sea bean find, rusty equipment settled in shallow water and a tiny basin with a handful of those speedy and shy green turtles. 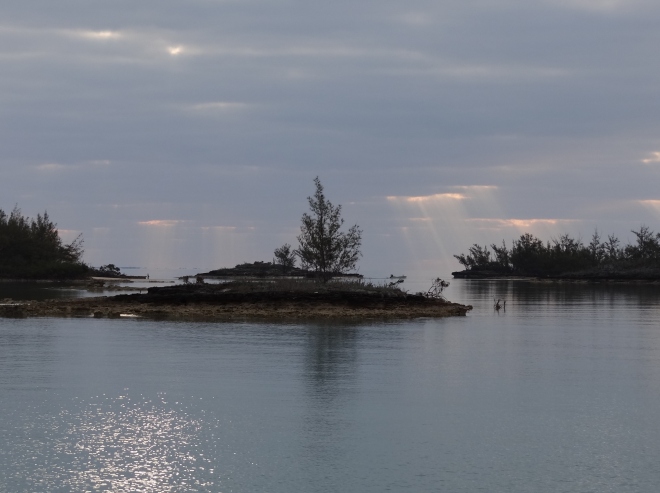 Treasure Cay was a must stop. So hard to resist that long curved, magic dust sandy beach with beckoning sand bars and turquoise blue water. Nice too, that Coco Beach Bar makes a mean frozen leaded or unleaded smoothie. 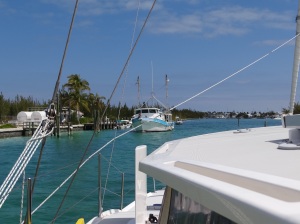 Our enjoyment of these critters hasn’t faded

The next day had laundry as the top (long overdue) priority, then we’d mosey over to Green Turtle Cay on Tuesday via the Don’t Rock Passage to get past the dreaded Whale Cay. Any cut would be very passable with the low wind days we’d been enjoying and boats heading west (or east) through the Sea of Abaco had their pick of 3-4 ideal days to get past Whale Cay.

The Captain’s birthday and the first day of spring were ample reason to splurge on the dock and dine deal at the Bluff House. A rate of $1.50/ft would allow you to apply all your dining spending (not including gratuity) against your dockage. It’s a great deal if you plan to spend even minimally at the Jolly Roger Bistro. A front was due to enter the area; perfect time to be snug at a dock.  This would be our first marina stay in the Bahamas this season. Plus, we hoped to meet up with some boat friends in Green Turtle and west.

Good weather checkers we be, Sunday early evening found us checking our sources and wondering what the heck happened to the favorable long-range weather forecast? If the forecast was to be believed; the more sources in agreement, the greater our trust; then we needed to cross Monday. Like the next day! Waiting for another window farther out than two weeks, was too long. Adios dock and dine, farewell cruiser friends, good-bye un-combed beaches; ‘til next year. Archer, Treasure… Vero Beach (Velcro already in place)