Given that we didn’t need to leave the Abacos until very late March, we had a solid month in which to acclimate to being stateside. Having constant wifi aboard makes us happy too!

We stayed only one night at Little Harbor… all together now…leaving sooner than planned- of course. The Captain promised we’d be back though.  Enjoyed a brisk sail north to Marsh Harbor, 23nm from Little Harbor, in the protected Sea of Abaco. The harbor was pleasantly full but we nabbed a good spot. Took a chance and went in to Marsh Harbor Marina to get that one load of laundry washed and eat lunch at the Jib Room; aka “Lunch and Laundry”. Flipped that coin right, both washers were available. How great to enjoy a delicious conch quesadilla with coleslaw and a Pina Colada on the deck and be able to check on those machines at your leisure.

Another small world story coming atcha: we started talking to another boater enjoying lunch; he’s from Toronto, but that’s ok. 🙂  He flies down for a week or two at a time and one of his fave places is Long Island. Perhaps that’s because he and several business partners own the thousands of acres formerly the Diamond Crystal Salt Mines there. They have hopes and a multi-faceted plan for the property, but it might not happen in our lifetime.

We raided Maxwell’s grocery and signed up for 30 days of O.I. I.  Notice how the blog posts finally got up-to-date?

Thursday, February 28, 1983: the last episode of MASH with 125 million viewers- were you among them?  Fast forward 30 years to the bread baking galley on s/v Ortolan; add a pan of skillet granola(um-um good) AND the boat is warmer for it.

Near the end of our days in Eleuthera we heard from s/v Indigo as they headed from Spanish Wells to Harbor Island through the Devil’s Backbone. They’d be coming back into Hope Town on Wed or Thursday and we hoped to connect.  A common topic among boaters is weather and which of the hundreds of sources are any good. Glenn passed along that one he likes is WeatherTrack so Russ checked it out when we had wifi set up. An hour later we had the app on the iPhone, given that it had received an excellent rating. Oh speaking of weather, how about that cold front due over the weekend…. And wait, another one- 3 days later?  Geeze.  The second one looked worse than the first, especially since the wind would be clocking around 360 degrees over a relatively short time period.

If this isn’t the time to try out our MC connections, then when is?  Would be a great time to do our Hope Town visit, but good luck finding an empty mooring! You may recall Hope Town’s own Cap’n Ron who operates Abaco Multihull Charters, using both Maine Cats MC30 and MC41. He helped us secure a mooring for a week in lovely Hope Town. 7 nights for $100; cheap insurance for piece of mind. Not that moorings never fail…

Friday night we joined our friends on s/v Indigo for our once a season see each other in person. We sipped Pinot Noir at Hope Town’s newest hangout, “Wine Down, Sip, Sip”.  Just in time too; they’d be flying back to the cold Northeast Saturday morning. 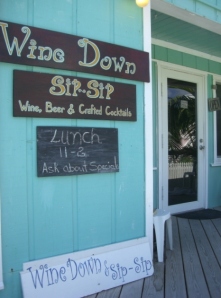 Sip, Sip- very comfy and the place to be.

March 2nd Hope Town celebrated Heritage Day with the Wyannie Malone museum the focal point. Local crafters and artisans tempted us greatly with their wares. Gail and Bruce on m/v Orient Express make lovely sea glass jewelry from sea glass they’ve found over many years in the Bahamas. Bruce learned the silversmith trade later in life (oh, not that he’s even 70) and together they vend at a handful of craft fairs, including Old Saybrook and their home town of Niantic.

Those two fronts came and went, making sure our view of the harbor changed 360 degrees at least once. One night we chose Captain Jack’s for their Taco Tuesday and 2-4-1 margarita special. The drinks were quite good and generous; you’d think we could have each settled for one…

Harbor’s Edge, a stone’s throw from our mooring, was a must do. Closed for renovations in Dec, they are the first and last place we dined at in 2007 and we never miss enjoying their excellent food and perfect view of the harbor. Their house rum punch, Over the Edge, is so good but if you do go over the edge, you’ll be in the water! While eating dinner there during our charter week in 2007, we saw some guy fall in attempting to get into his boat; and this was early!

A great view while you dine- Ortolan and Moondoggy a MC30. Big cat, little dog 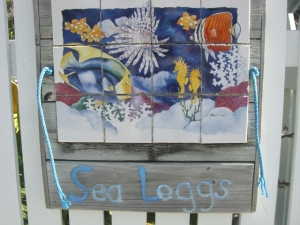 You can tell that artists are drawn to Hope Town. (pardon the pun)  One afternoon we headed south out of town down the main road, coming across several pretty beach homes, a few paths and the tip of Nigh Creek with its tiny bungalows set on docks alongside the narrow creek.

This driveway was designed for easy use by a golf cart.

Our seven night stay was drawing to a close and Friday we planned to head south to Little Harbor using the moderate NE wind to sail. First though, a few provisions needed to come aboard. Hope Town boasts two small groceries and depending on when the boat delivers fresh supplies, the inventory is fair to good. Thursday afternoon was not a good time; the shelves would be re-stocked Friday morning. I needed lettuce. The romaine 3-pk was quite wilted looking and not worth $4, so Russ said to grab the iceberg. I reluctantly did so, acknowledging that, “we’re not going to find fresh produce in Little Harbor.”  You need food; eat at Pete’s Pub. No market in this remote locale.

Saturday would be the first annual Little Harbor flea market, held on the deck and picnic tables of the pub from 9-noon. First Heritage Day, then the flea market: about time we’d be somewhere when an event was happening.  So far, we always seem to just miss them.

You’ll find about 10 moorings in Little Harbor and in the three times we’ve been, a mooring has always been available. Summer might be a different story. Little Harbor is out-of-the-way down at the southern end of the Sea of Abaco and you’ve got to pass by several cuts on your way. The swells can be uncomfortable and sailing vessels usually want to sail down in NE wind and sail back in SE wind; less than 18kts please. More importantly, the narrow entrance into the harbor carries only 3ft at low tide; even we won’t enter unless the tide is mid or better.  The draft on many monohulls (oh, another downside) is greater than 5ft so any boat wanting/needing more than 6ft can’t enter even at high tide. Then too, one needs to leave.

Early bird gets the worm and all you garage sale folk out there can attest to that truism. The usual assortment of clothing and household goods was available with a healthy dose of nautical items.

Beautiful day for the flea market

Baked goods, home-brewed hot sauce, interesting sea glass jewelry (made without silver wire), no money back guaranteed fishing lures (Russ got one), plants, oodles of books and one enterprising young man selling jars of sea glass. Proceeds would benefit the Cherokee (next settlement south) clinic. Best in show was the surprise item I snagged: fresh-picked greens from Lightbourn Farm, a nearby farm that grows hydroponic produce. The farm donated 10 5oz plastic tubs of mixed greens and another 10 of orange grape tomatoes. Located in Schooner Bay in south Abaco I’d read of them in the semi-annual “Destination Abaco” booklet. So who’da thunk we’d find awesome lettuce in Little Harbor: not me, you know that!

Then while everyone was busy at the flea market (lots of folk drove down) we headed for the beach. In December we’d been placed in the know about how to get there and that sea glass was its claim to fame. True, then. Truer today. Scattered, twinkling in the coarse sand, we had only to stoop down and reach out.  Further down, the slab-like rocks at the waters’ edge give way to a multi-leveled beach as a two foot sand cliff has formed half way up the wide beach. We still picked up some sea glass and we also found several sea beans. A successful beach hunt in a partly cloudy 70 degree day.  By the time we stopped for a grilled lemon Triggerfish lunch and got back home, the clock read 2:30.   Later we’d move the time ahead one hour as DST finally arrives, much to our delight.

Sea glass sorting and showing off a small piece of blue