Clearing in happened at Green Turtle Cay. Amazingly we asked for 130 days and received 150; days seem to be granted in month increments. Other boats we’ve talked with only received 90. I told Cap’n Russ the customs person was impressed by his long pants and collared shirt- hey whatever it takes.

We’re in! Down with the Q, up with courtesy

We spent several nights anchored at Joyless Point (lousy name) tucked in toward the small crescent beach on the other side of the Bluff House. Free Tranquil Turtles were owed us from last spring and since the price had increased an astronomical 25% since spring 2012, we felt bad, but only for an instant.

The beach beckoned.  Dinghy’d in. Saw monohull go aground as they tried to play catamaran and by the time Russ zoomed over to help, they’d raised a sail and were free- don’t think they even saw him. The beach gave up three near perfect naked sea urchins; that would be deceased urchins without their spines; so you see what is called the “test”, but naked paints a better picture. Another couple was beach combing too and we got to talking. They were staying at a cottage around the corner and recently sold their Gemini catamaran. Water people don’t stray far from it. They told us of an organic farm on New Providence- a breath of sunshine outside of Nassau. http://goodfellowsfarm.com Started and operated by former sailors (with really good former careers) this place is awesome.

We kept hearing this caw-ing racket like loud crows, but not exactly. Finally figured out the noise makers were Abaco green parrots arguing in the trees on the scrubby land in front of us.

A walk around New Plymouth reminded us that Christmas was less than a month away. We noticed sprinkler-like fixtures outside of the windows on some fancy cottages by Gilliam Point. Our guess is they are turned on to clean the windows which probably get filmed over with sea spray, etc. Any other guesses?

The big event if one enters through the open west end of the Abacos, is Whale Cay Passage- ooohhh it is not fun. Most boats need to go out the cut, around the backside of Whale Cay (apprx 2 miles) and back in another cut. Usually big rollers and simply not fun at all. Large trawlers fear it, medium monos dread it, Ortolan says bah on that and takes the inside route in the lee of the Cay. Why? Because we can, can a catamaran can. Do I sound too gleeful?  Avoiding five foot swells with breaking waves, the bows digging in to each swell as it crests over- you bet we were happy boaters. As you know, the wind had been up for days out of the NE and finally Friday night it backed down a bit and so did the seas.  You can take one of three ways past Whale Cay: the way most have to go is outside, the next option is the route we took last March, by Don’t Rock (a shoal draft route roughly in the middle) and the third is South Whale Cay Passage which is very close to the cay. In NE wind the land protects you from the swells. Assuming your draft is 4 ½ ft or less you have an easy trip east toward the hub of the Abacos. Be sure to make this move at or near high tide.

We sailed up close to the western end of Whale Cay, about ½ mile in where the depths were still over ten feet, dropped the sails, turned and motored slowly in aqua calmness. The lowest we saw was 4.9ft, much was over 6 feet. Once near the eastern end, we angled away and raised the sails for a lovely sail to Guana Cay.

Sunday we hooked up with s/v Anania who we’d met in Green Turtle, for a leg stretch in town and a late lunch at Grabbers. So few boats have crossed that you can almost keep track of them all.  Will be a week before another good crossing window opens up. Spent a few days at Guana and when the wind cooperated, we sailed east through the Sea of Abaco for a brief stop at Man O War and on to Hope Town.

Instead of “gosh, I hope we can get a mooring” uttered in season, we entered the harbor and said “gee, which one would you like?”  Double greens are our first choice and we took one in the NE corner, near Moondoggy a MC 30 and Mambo a MC 38-41. Mambo was the first MC 41. Built as a 38, she wasn’t quite right and had her sugar scoops extended to become a 41. Captain Ron opened her up so we could check her out. How did he know we’d want to do that?

Ortolan and Mambo get acquainted in Hope Town 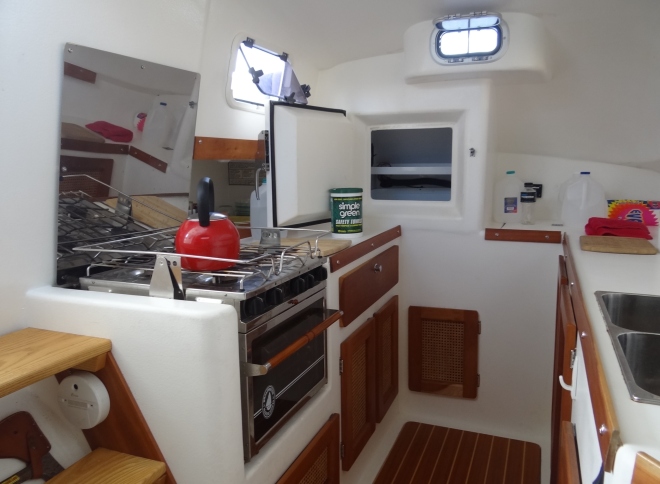 Similar, but oh I appreciate mine even more!

We began hand stitching our sun protection fabric back on to the screacher where it had torn off.

Could be the start of a new career.. not!

Did the harbor tour via dinghy and met Eileen on Ankers Away a Krogen48. We’d been tailing them so to speak since leaving Lake Worth, each taking turns moving ahead until – yay! we won getting to Hope Town first. Bahamas home base for them, this was only a 3 night stop for us. I was a bit jealous of all the herbs growing in planters on the railings.

The weather continued to be unsettled, and if not windy then rainy.  Not at all typical we’d been assured several times. Friday afternoons usually find fresh seafood brought in by Down Deep and baked goodies by Back Creek Bakery over on the government dock. I wasn’t surprised to hear Down Deep announce on the Net that they wouldn’t be coming in Friday as conditions had been too rough to fish.