And how many times have you watched Captain Ron? 🙂  While our crossing window did not open fast it sure did close fast. A weak cold front (gosh I hate them- but I hate strong ones worse) was predicted for late Wed, bringing wind greater than 20mph. Our trip was 150nm (172 regular miles for all you landlubbers) and we weren’t sure if we’d lay over on the banks to get some sleep or just keep going all night. For a pleasant Gulf Stream crossing, the wind you want is NOT any north and ideally SE to SW not more than 15kts. Basically how that translates is you’re not likely to sail, so you just motor across, doing your “S” thing and once across then you can proceed based on your desire or the wind conditions.

Our waypoint on Little Bahama Banks was Memory Rock and to get there you would steer (or let Otto help you) a course of 81 degrees, almost due east. Our course for the first few hours was 110 degrees and you can see in the photo below that we are being pulled north. (the green triangle is a vessel with AIS) Once we altered to 90 and then 80 degrees, the Gulf Stream pulled us above our desired path (purple line) quickly, our speed increasing to 7.3kts with a 3:45 ETA to Memory Rock. The seas in the Gulf Stream almost deserved the wavelet description; they certainly were not marching elephants! 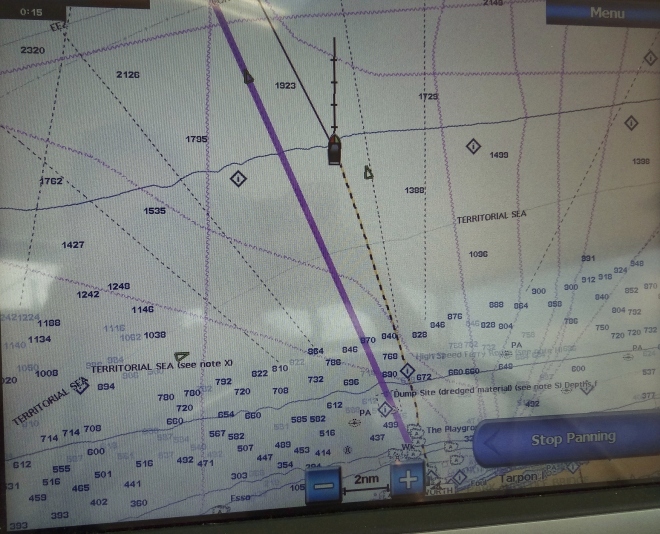 We set a course for south of desired. Notice how our stern is being pulled toward the purple line. 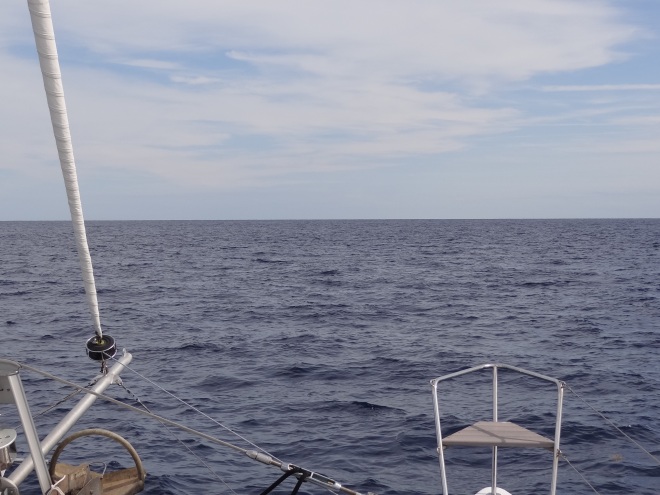 Seas less than one foot make for a happy Ortolan and her crew.

At 24nms out I tossed out a message in a bottle; an empty Santa Rita 120 (screw cap) with white paper rolled up inside to attract attention and our boat card with a message. I hope it takes a long ride and is found somewhere outside the U.S.

Changed course to 94 degrees because now we were north of Memory Rock, which we passed by at 3:15.  Our ETA to Green Turtle Cay was appox. 8 a.m., making a sleep stop possible with the hope of sailing Wed when the wind switched to north, compliments of the approaching front.

Can you imagine what the mountains look like below the water, as the depth in the Atlantic goes from 2000 ft to 20ft near the Banks in less than 2 miles? Suddenly the water turns that lovely turquoise blue and you know you’ve arrived! We decided to anchor off Mangrove Cay about 25nm away and only a mile off our course to Green Turtle. Many cruisers report simply stopping for the night in the middle of nowhere on the banks when conditions are calm but that would weird me out. Mangrove Cay is a ½ mile long piece of land and you just approach it and drop the hook.

After an early dinner with the last vestiges of daylight, I baked muffins so we’d have an easy to eat breakfast. When we arrived at 7:45pm accompanied by the almost full moon, much to our surprise three sails were already anchored. We’d left Lake Worth at 7a.m. and never saw any sails crossing over, just a few motor yachts. These guys must have departed at o’dark thirty.

Reveille came at 4a.m bringing with it three more sails anchored nearby! The moon hadn’t set yet so it provided just enough light to take the edge off darkness; we had no trouble seeing especially if we stood outside the enclosure. I was cautioned to speak quietly- sound carries well over the water. Well then what about the racket when we raise the anchor?  The stillness was beautiful and I wished we could have slunk silently away.

Fast forward to 1pm; the main up, the screacher just unfurled and lunch was about to be served. The wind was inching up. I was in the galley. Suddenly, a shift, the boom swung. The wind whipped up and in the 10 seconds it took me to come up the steps, the display read 19kts apparent and that was TOO much for the screacher. We raced to wind it up but, let’s just say “thanks so much Maine Cat for NOT providing enough line to allow the sail to completely wrap up in strong winds.” It wraps so tight that we run out of line and that’s after we let out more last summer. The last couple of feet were only partially “under wraps” and the noise of the material flapping in 25kts of wind was sickening.

We took off like a bat out of hell and hit 10kts within a few minutes, the sky dark and ominous. Oh darn we forgot that a cold front meant big winds! Heck, the forecast said 10-15kts, not 25! So the captain got his wish to sail and after three and ½ hours we’d shaved one and ½ hours off our ETA and years off my life. Ok, maybe not years but the blood was pumping! The jib was out in various configurations (mostly 1/2 out), Otto was able to help after the initial hour of BIG wind backed down a bit and lunch was served late.  I spotted a large sea turtle during this time but wasn’t about to go out for the photo shoot.

Sunrise; you know the rhyme –  red sky at night sailors delight, red sky at morning sailors take warning. Did not heed the warning; too busy taking the silly picture.

Sunrise at 7:20am heading toward Great Sale Cay