A lovely day inserted itself between the less desirables so we bid farewell to Hope Town and motor sailed to Man O War to charge the batteries, make water and snorkel for lobsters. As no lobsters were spotted or harmed during the outing we went in to Dock & Dine for a take-out lunch and relieved the grocery of several lobster tails.

Once again, we found Marsh Harbour looking rather lonely, with about a dozen boats anchored. Much of the boating activity is charter, ferries and local traffic. Speaking of traffic… the only traffic light that exists in Abaco is in Marsh Harbour. Bet it’s one of the very few, excluding Nassau, in the entire Bahamas. After we visit all the islands, we’ll know for sure 🙂

A Bahamian one light town

After Sunday, Abaconians and their cisterns are very happy, as over 2 ½” of rain fell during the day. We collected a couple of gallons in a bucket with plans to wash the stern screen panel. All day is unusual; most days the showers come and go and you just wait it out. Sunday brought an all day rain like we haven’t seen in a long time.

Decided to start the week off right and get the laundry done after lunch. The coin op place in town doesn’t cut it so we use the machines at Marsh Harbour Marina. Alice on s/v Contentment and Roger on s/v Namaste had the same idea and I was last in line; got done at 4pm. Russ stayed on the boat and continued the screacher sewing project. I brought a book to read and the handheld to call for the ride back. Oh, did you think I took Bunting in myself? Ha- I can barely get the outboard started; but driving lessons resume soon. The plus side to the laundry project was the opportunity to talk with other cruisers; share tips on great anchorages, discuss good passage routes and simply make new boat friends.

The first order of business on the Net each morning is weather; a topic near and dear to every cruiser. Thursday would bring a mild front with winds doing their typical clocking around; not a problem if you are on a mooring or at a dock, but possible trouble if you anchor. Some anchors reset better than others and this happens better in mud or soft sand than in hard.  Our MO is to avoid being at anchor when the wind clocks around; because this seems to happen at night. Umm, so let’s think- a snug place with moorings, close to where we will exit the Abacos… got it! Little Harbour, home of Pete’s Pub, “where the elite eat in their bare feet.”

Wednesday was a lovely day; perfect for a low tide visit to Tahiti Beach. On the way, you know the drill, we’d make water and charge the batteries by motoring. Stuck the jib up for a bit before our course turned right into the wind.  The beach was our oyster- or in our case, our sea glass and sea bean collection zone. 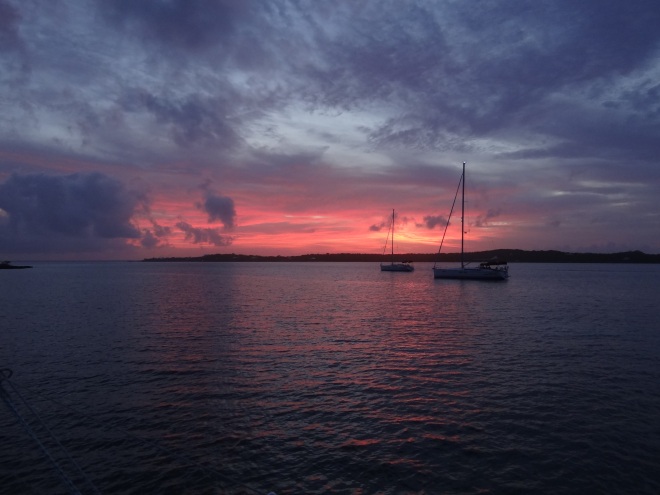 Thursday was another two hour motor down to Little Harbour and hey, who’s that monohull cutting us off at Tilloo Banks?  None other than Alice and Andy on Contentment. Home port is Niceville, FL, isn’t that apropos? Although they hail originally from Dallas- rhymes with Alice. We arrived by 10, picked up one of the seven empty moorings and proceeded to settle in.

Our expected three week stay ended up lasting two nights; however, fortunately we jammed in a lot in two days. After a delicious Lemon Triggerfish sandwich accompanied by chopped coleslaw with walnuts and rice, walked the interior beach which is fun and easy to do near low tide. 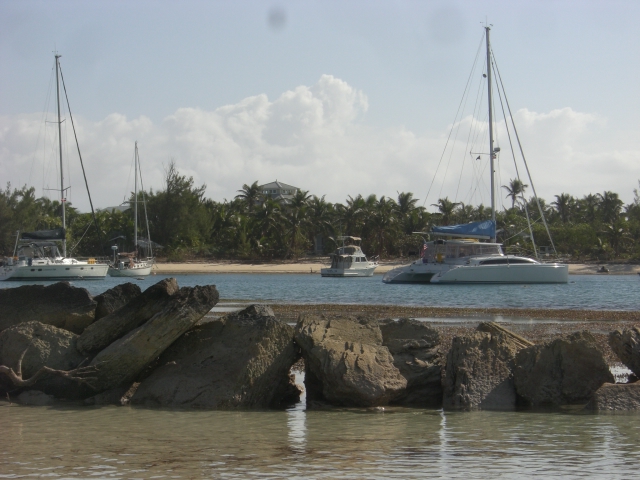 We met West and Nash returning from a sea glass hunt on Lynyard Cay. West owns a house right on the rocky shore and Nash is a lucky CT neighbor who visits several times during the year. Island transportation is a small skiff that is moored in just-deep-enough water in front of the house. One needs to wade in close enough, then climb the ladder up to the wooden walk.  A large pile of flat stones sit waiting to be turned into a stone walkway that will get sprinkled with sea glass.

West provided directions to Bookies Beach that sits south of the Pub beach and promises sea glass. Andy met us on our way back from our low tide walk. Our sponge brains worked hard to soak up all the local info he shared; been coming to Little Harbor for ten years and is a wealth of local knowledge. He gave us a personal tour of the foundry and that is one amazing place. The bronze pieces are crafted using the lost wax process, meaning the wax gets vaporized during the intensely hot casting step. I wonder if the house rum drink, Blaster, gets its name from the foundry.

Friday morning was the ideal time (near high tide) to explore the mangrove-lined cove accessible through a narrow cut from the mooring area. Was interesting but I was more excited to be heading to Bookies Beach next. Took longer to find the path that led to the beach because my significant beachcomber didn’t, well let’s just say “I was right.” 🙂  West spoke the truth about sea glass; a whole snack bag full, a few sea beans and some cute driftwood pieces.

A quick community book exchange stop was in order to be sure it; 1) was still there and 2) had enough books. Roger that on both counts and the Christmas potluck sign up was there too. The Pub provides the dining area and the local residents (most are not year round) all bring a food item.

Friday night is gathering time at Pete’s Pub and you’ll find locals, home owners, pub workers and even Pete himself hanging out between 6 and 9pm. Pete’s son, Greg has a new baby just back from the hospital.  Many of the people who own houses in Little Harbour are not only former cruisers, they also have ties to CT. Small world. Word of the tragic shooting in Newton, CT had spread and we all felt terrible.  Met a bunch of friendly folks, whose names I cannot recall but I bet they are on the list. Lenore was especially engaging. She told of the years when nude volleyball was played in George Town and how her son’s career was directly influenced by his years on the boat. We said good-bye for the evening with a request to stop by before we left the harbor. Their house is just a few down from the Pub with Mr G moored in front of Ortolan.

Saturday found the Captain doing his usual weather check and he was not wearing his happy face. The forecast indicated our planned leaving window had closed and heading out today for the two day trip to Nassau was our best bet. On the plus side, we’d be able to sail both days and the OII internet subscription was up today anyway. We’d been hooked up with the chance to buy fish and shelled lobster around noon so now we’d miss that; a major disappointment. We traded books with Contentment and were promised a photo of Ortolan with this morning’s rainbow over us.   The outgoing tide would help us out the cut which we’d heard was “doable in a big boat”, as opposed to a 20 footer. Still, to be safe, we made rough conditions preparations and hoped our luck would hold and we’d be over prepared.