We left Hope Town to begin edging closer to the point of no return… on the return home.  A few more days and the forecast  looked good to cross in 4 steps; first we’d get to Green Turtle Cay, then to Great Sale Cay , third night spent out in the middle of nowhere on the Little Bahama Banks and finally cross to Florida on the fourth day.  Any bets on how close the actual came to that scenario? The normally consistent day-to-day forecast left town and each day brought a changed prediction from what was said the day before.

Thursday around 2pm we moved from Green Turtle Cay- dare I say sailed 4 miles to Manjack Cay and anchored with a passel of boats near Crab Cay. Many boats are headed in for a spring romp in the Bahamas, unlike those of us who are headed out. Checked out the beach then made sure we could get around to the ocean side for our one and only snorkel in the Abacos. (found out the turtles have moved to Crab Cay- go figure) A small reef just off the beach was going to make that possible. Friday morning, Russ would clean the hulls- we’re talking flat calm water by now and then we’d snorkel.  Right.  Shook our heads after hearing the morning’s forecast and checking NOAA on the chartplotter for gulf stream conditions as well as close to shore by Fort Pierce.  North wind and low wind days got tossed overboard – unacceptable! which left us with…. Leaving now! Oh and the way to make use of the wind is to do an overnight!  Sure, bring it on. By this time all I (Russ too) wanted was as calm a crossing as possible and if we could sail most of it, that be a bonus.

During the day ( sunset is 7:25 with light in the sky another 30 mins) the wind could not make up her mind and barely bumped up to 10kts. We raised the main before the anchor and did not lower it until 170 nm later. Much of the day Friday we motor sailed, sometimes with the jib too when we weren’t too close hauled.  Shortly before reaching the famous “Center of the World Rock”- what- never heard of it? me either. Looks more like cormorant rock.- we exchanged the jib for screacher as the wind increased enough and our heading changed favorably to allow us to use the big guy. 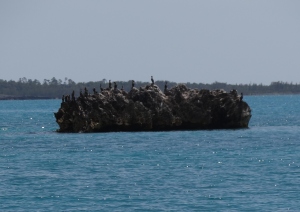 Center of the world rock

The forecast promised 10-15kts which would have been a perfect accompaniment to the 6″ waves lapping our hulls. I’m being generous when I say that condition lasted a few hours; the wind picked up hour by hour until we had to put out the jib to steal wind from the screacher.  The screacher is a light wind sail- less than 20kts thank you. We zoomed along at 8- 9kts and I even saw a blip at 10kts. Yes, we’d make FL on time, but this was too fast. Friday at 7:30pm we calculated our ETA to be 5pm Sat. Saturday at 7am our ETA was noon! 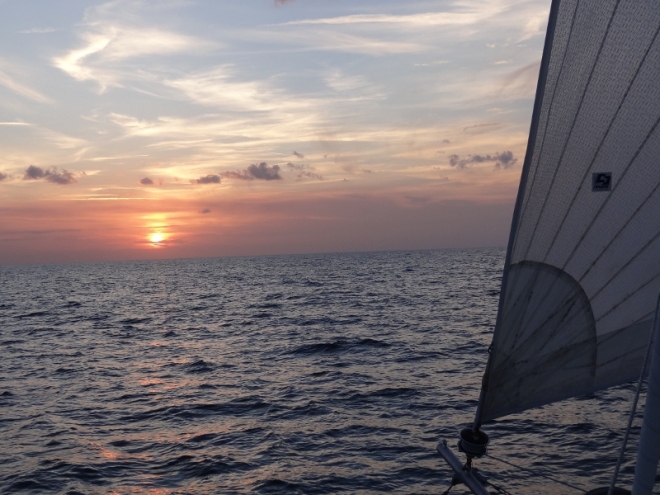 We sailed all night- a first for us- but were forced to motor (I can’t call it motor-sail even though the main remained up) the last 5 hours thanks to Ms Fussy Wind blowing right on our nose- or is it noses?   Met up with a couple other crossing boats as we reached the channel at Ft Pierce. On top of being tired we had to contend with all the Saturday local boat traffic, small boats fishing along the channel’s edge. Then Russ changes things- “we’re taking the main down now.” In the channel? I look up and well, we ARE heading right into the wind, so why not? We survive as do the smaller craft and 30 mins later the hook is dropped- in murky water. blaahh. Safe and sound-can’t complain. Slept like logs Saturday night.