They left Green Turtle Cay without saying farewell.  With two sounds, White and Black and two relatively shallow anchoring places just outside the entrances, I figured we’d spot a turtle. Was the Cay named for someone’s pet turtle? No, I think not. I think they flourished years ago and were over-fished for turtle soup and tortoise-shell combs. Our visit to this popular clear-in and say good-bye stop was not without its surprises, in lieu of turtle sightings.

Time: around 6pm, I’m in the galley pretending to prepare dinner while gazing out the window.  The window sits about 3 feet above water and allows for a great view at near-water level. Would you be surprised to see someone swimming right toward your boat? I mean, headed straight to it, from the beach about 100 yds away. He’s wearing a snorkel mask, swimming smoothly and steady. Oh honey, get your clothes on- well, he’d just taken a shower- someone is swimming toward us. A whole bunch of thoughts passed through my mind, but I finally decided someone wanted to swim and we made a good marker and if he got too tired he could rest. Russ goes out (with clothing) to light the grill- see, I really was prepping dinner- and Mr Swimmer gets to the stern and without sounding out of breath, “hi, you guys staying here long?”   Umm, how do you take that?   Like as in, I’m scoping out the boat to rob you when you get off, or as in, are you visiting Green Turtle Cay for a while?  He said his visit was ending the next day, he wanted to get in a challenging swim, so he picked our boat (well, it was the only one anchored off that beach) to swim out to. Young kid, twenty-something and he was a good swimmer. We wished him luck- oh you think a dinner invite would have been more friendly?- and watched him swim back. 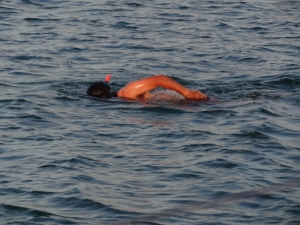 Our surprise visitor swims back

White Sound is prettier than Black Sound and contains the Green Turtle Cay Club and the Bluff House with lodging and the waterside Bistro, The Jolly Roger. Both offer a deal where the money you spend on dining offsets your dockage charge. Good to know for the future. This time with the calm weather, not only didn’t we anchor in the Sound, we anchored outside the cay, but the ride wasn’t long and when the water is wavelets, why not? We’d read that you absolutely do not want to anchor in Black Sound and in White, it’s an iffy proposition.

The settlement of New Plymouth sits to the west of Black Sound with Settlement Creek in between. The town was a quick tour; Irene had gotten here first and damage was still evident. The homes were colorful and the jail was pretty in pink. We scored fresh frozen local grouper at Curry’s market. Black Sound contains several marinas and mooring balls, worth investigating so we’d know if the area was an option in bad weather.  The mooring balls were none we’d want to use, but one near the far end was worth a closer look. We came close, circling around it part way, then while we still had eyes on it out of the water leapt a huge stingray! This guy was huge. We saw a bit of motion break the water’s surface as he jumped out and up in the air at least two feet, then back down. OMG, darn good thing we still weren’t in that exact spot.  Was amazing and so unexpected. I know this can happen and we’ve seen many rays in shallow Bahamian waters, but never imagined being in the dinghy, so close. The one I saw jump in Boot Key Harbor wasn’t as large or so close.  I’d say this made up for the lack of turtles.

I’ve jumped ahead a bit, so let me step back to our trip here from Hope Town.  An accurate forecast gave us a pleasant, non-tacking sailing day of 27 miles- past Marsh Harbor, past  Guana  and Treasure Cays- and past the dreaded, double whammy Whale Cay Passage.   In the Sea of Abaco one needs to pass through a large shoal area either by using the “Don’t Rock Passage” or the close to shore inner route.  Most vessels, however, must make a jump outside Whale Cay which involves transiting two cuts- one out and then back in. This is one of the most notorious passages in the Abacos and one you do not take lightly. With our draft we can avoid that nasty out and in route and instead opted to do “Don’t Rock Passage” which is roughly in the middle of the Sea between Treasure Cay and Whale Cay.  This occurred near high tide, with me watching at the bow. The swells still sneak in from the cuts; I had tightly clenched hands on the rails all the while. The lowest depth we saw was 4.9 ft with depths mostly in the low fives.  Beautiful and eerie at the same time. 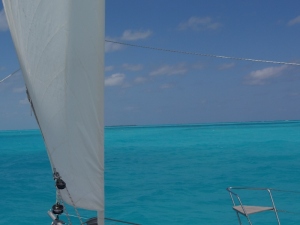 This VPR route takes you close to Don't Rock

Thursday, after visiting New Plymouth and the ray incident, we made a beeline for the Jolly Roger Bar and Bistro at the Bluff House located in White Sound. Oh this was nice, like having all the comforts of home in your favorite exotic place. The extensive and varied menu was reasonably priced and the Tranquil Turtles took the edge off any lingering nervous tension. Service was friendly and efficient, not to mention competent at photography with a strange camera.

Our last dining out in the Bahamas