The sunny and warm weather on this trip south has made a difference in how we’ve enjoyed Georgia more than our Spring trip. Today, Thursday, I dusted off a pair of shorts for a land trip- first time.

Somewhere near Jekyll Island we heard Celise/Spirit on the VHF- jump to the 3/5/11 post for background on our second cat friends. 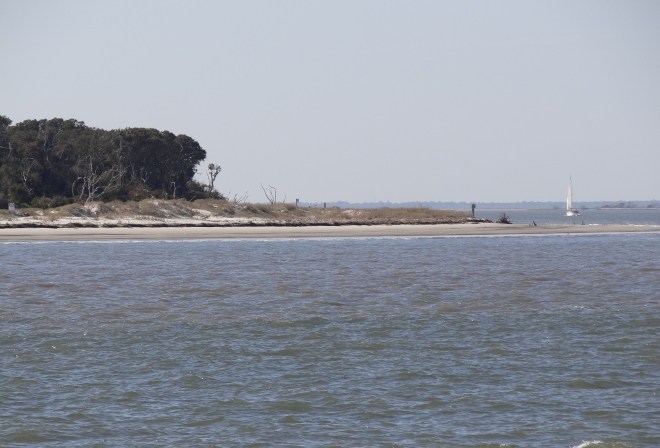 Couldn’t help think of them as we passed by Thunderbolt Marina where the boat spends her winters. This was the other owner’s year so we knew Carolyn and Cort weren’t on the boat. Or were they?

When we saw them in the Spring just north of Fernandina, FL they were going to stop at a place called Plum Orchard on Cumberland Island of wild horse fame. We planned to do the same on this trip- could get off the boat, walk the trail(s) and have a decent anchorage for the windy night ahead. Despite fighting the current for half the trip, we arrive at 12:30, eat lunch and head in.  The park charges $4 each- honor system using the envelopes provided and a display board lists the trails: Russ wants to see wild horses on the beach, so off we go. Heading toward the mansion (no tours today), we spot another cat heading down the river, they pass Ortolan at anchor and as they come closer we realize that it’s Celise/Spirit.

Starting to feel like déjà vu.  Certain that we know the boat but not the people, we head off along the trail- which is 2.4 miles –toward the Atlantic side, figuring they might anchor and we’d run into them later.

The trail takes us past huge oaks laden with Spanish Moss, pine glades and the creepiest spider we’ve ever seen.

Glad we didn't walk into HIM

The sand was silky white, but alas no horses on the beach. At low tide the area was huge; looking back toward the
dunes, high tide was hard to imagine. The few horses we did see were near the mansion; food kept them nearby so visitors could catch a glimpse.

Celise/Spirit was nowhere to be seen when we got back to the dock at 4pm; on the dinghy seat was a stone set atop Cort’s business card. The handwritten note said they’d be in Fernandina tonight and asked us to call on VHF 16. Tried a couple times, but either 14 miles was too far or they were off the boat… in town… at a yummy restaurant… I can’t complain, Russ grilled up delicious lamb chops and the red wine was delicious. Plus, no worries about the stinky paper mill at Fernandina.

Turns out that Cort is on the boat with the other owners and they’re headed to Ft Lauderdale where he’ll fly back to WA. Enjoyed a brief chat with Carolyn whose cell phone number I discovered on a post-it.  Gave her our cell number to give to Cort when he checked in with her next.  By this time the calm winds have picked up and are now blowin’ a steady 20kts- not so pleasant if you’re in a wide open anchorage. The VHF springs to life, “Celise/Spirit catamaran anchored in Fernandina, this is Shandell, over.” And again.  Another boat chimes in and we cringe to hear that Shandell who must be near Celise/Spirit, thinks the cat is dragging. Well, yes they could be, but more likely the wind has stretched the rode and now the boats are or appear to be too close- and they may have been to begin with. Thirty mins later Shandellhails again as nothing was heard back before. All we hear after that is “they’re gonna move.”  Yuck, in the dark with 20kts – yes, could be worse.  Yes sir-ee, happy and content in our creek.