Could almost hear the sound of Velcro being ripped apart as we departed from the mooring ball we’ve called home for the past two weeks. Who would think that “maybe 3 days” would turn into 2 weeks? We are not alone in that occurrence, every mooring ball has 2- 3 boats on it and many boats were here when we arrived and are still here.

Vero was the place that we knew existed, but hadn’t encountered.  We were adopted by POLAR PACER, a perfect match-up as we are the new kids on the water and they are still fairly new at 18 mos, yet extremely knowledgeable and eager to share. We met other couples, some even younger than us and hosted many a night of cruiser tales and Mexican Train Dominoes. A loan of SANUK’s Tiki Bar sign – a failed sneak attempt to hang and run- gave us party boat status.

Two trips to the beach were unsuccessful in terms of sun and swim, but thanks to Waldo’s beach bar and restaurant, we were saved each time.  Voodoo Juice served in 32 oz plastic buckets – you keep the bucket- was the group favorite. Tracy (SANUK) wins the prize for best duplication of a bar drink- thanks for sharing your home made version!

In between fun stuff, we worked on boat and sewing projects, shopped twice at Publix, visited Panera for breakfast goodies and took the local bus to Lowes and Target. We discovered The Fresh Market, a budget breaking near twin of Whole Foods and restrained ourselves to only fresh meats, fruit, eggs and a very small bag of Praline Bourbon Pecans that I simply had to have.

As a small reward for tearing ourselves away, we spotted a manatee in the ICW channel; our first sighting.  Florida waters contain many areas with slow speed signs due to the manatees. 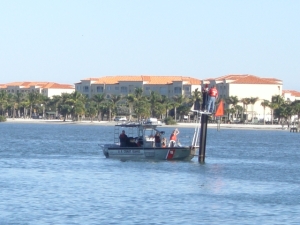 The above photo is a rare sighting of Coastguardius Marker Reparius. More than makes up for the lack of a manatee picture.

Starting to count the days until Benj arrives on Dec 22. We’ll have plenty of time to get the lay of the land (water actually) before he arrives. Our box of Christmas decorations will be opened soon as we attempt to “think Christmas” in 70 degree weather. Ok, not complaining. Happily, his only food request was for lots of fresh fruit. Think we can mange that.

Weather permitting we will leave here at some awful early hour Wednesday morning and go (sail?) outside for a long day to Miami. Worst case, we can come in at Ft Lauderdale if the Atlantic is not a kindly as hoped.