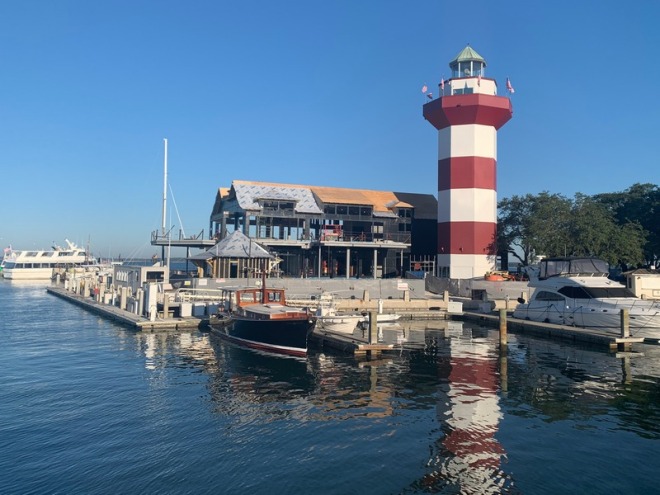 The esteemed Hilton Head was unfortunately a bit of a disappointment. While we knew in advance the dockage rates were high (they even add on a “resort fee”), we were looking forward to a little treat. Unfortunately it was more of a trick, we didn’t know the marina was in the middle of major construction project, building a new restaurant complex. So from 7 AM to 7 PM, we endured workers banging, cutting, hammering, along with the constant “beep, beep, beep” of all of their equipment. Oh, wait, we couldn’t always hear them, as landscapers roamed all day leaf blowing every walk, lawn & parking lot all around us. Doesn’t this “eco-friendly” “resort” know that each commercial gas-powered leaf blower emits nearly 300 times the amount of air pollutants as a pickup truck?  And their 100+ decibel level is similar to a jet airplane taking off!?  Yikes!

Oh, wait, I’ll get away from the noisy marina & go for a bike ride on their miles of “leisure trails”. Well, at least in this portion of Hilton Head, the glorified sidewalk was crowded, as well as stop & go with driveways crossing, along with other obstacles every 100’ or so. Then near restaurants & parking lots, the “leisure trail” would cross the road or divert around. I apparently zigged when the “leisure trail” zagged & I was pulled over by a security officer (flashing lights & all) for … biking on the edge of the road!  Horror!! 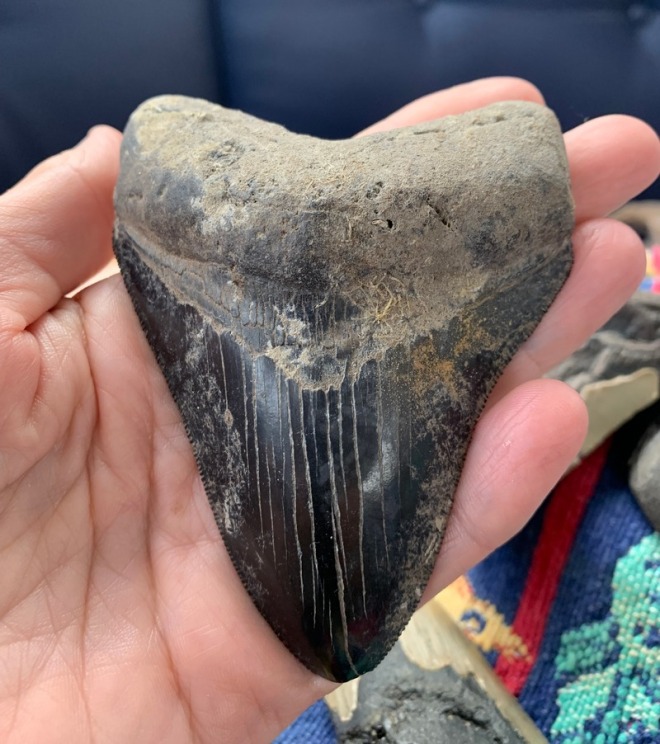 While passing thru Savannah, we enjoyed a great dinner out with Gene, a fellow PDQ cruiser.  He brought along some petrified shark teeth he has found diving.  This one is around 3 million years ago from a Megalodon, which was likely around 40′ long.  Technically, they are fossils.  Shark teeth become fossils through a process called permineralization which takes tens of thousands of years.  The lost teeth sink to the bottom of the ocean & become buried by sediment.  Eventually mineral-bearing water crystallizes within pores in the tooth & form a fossil.  Besides the massive size, you can tell it is from a Megalodon from the slight serrations on the edges, as if something this size needed extra flesh cutting ability! 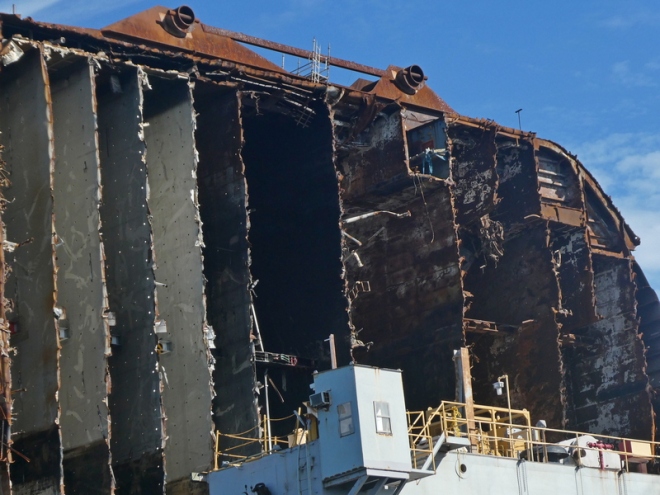 These were the multiple decks (now sideways) which had been full of cars.  The jagged metal is from cutting with the chain. 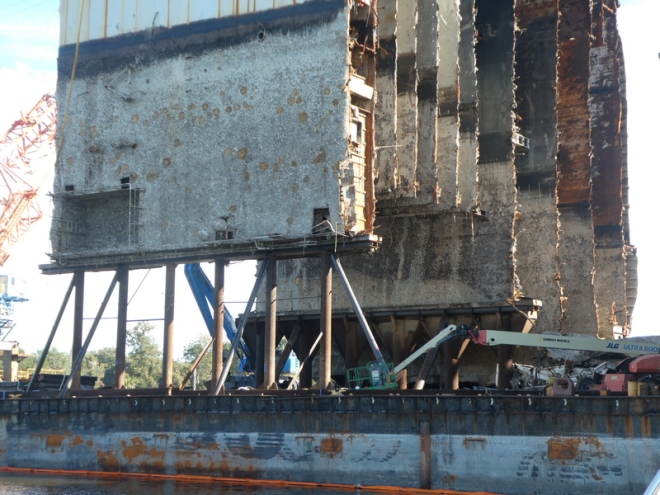 This cross-section of the ship is supported on the barge with a custom support to keep it from rolling off.  To reduce weight & pollution, the 4,200 cars had to be removed first.

This is the last section of the overturned cargo ship Golden Ray, which capsized off St. Simons Island, Georgia on September 9, 2019.  This has been the largest marine salvage operation in U.S. history, as this RORO (roll-on/roll-off) ship was 656 long, filled with 4,200 cars.  Although controversial & with lots of challenges, the salvage operation included “sawing” the ship into 8 pieces, using a custom rig with only heavy chain sawing back & forth.

We’ve been taking pictures every trip past, as it is only 1/4 mile from the ICW channel.  We thought we were going to miss seeing this last piece, as the news said it was removed & barged away just 2 days before. Surprise, surprise, entering the channel into Brunswick Landing Marina, there it was!  Still on it’s barge, as they’re using this area as a staging area before cutting into smaller pieces for salvage.

After waiting a couple of days in Brunswick for a storm system to go by (the same one that flooded & washed-out parts of northern California earlier in the week), we’ll stop at Jekyll Island – a smaller, less busy & much, much nicer version of Hilton Head for some quiet & un-accosted bike riding!