With the seas calmed down, we’re off to Maine!

A few miles offshore, we spotted this fin swimming alongside … 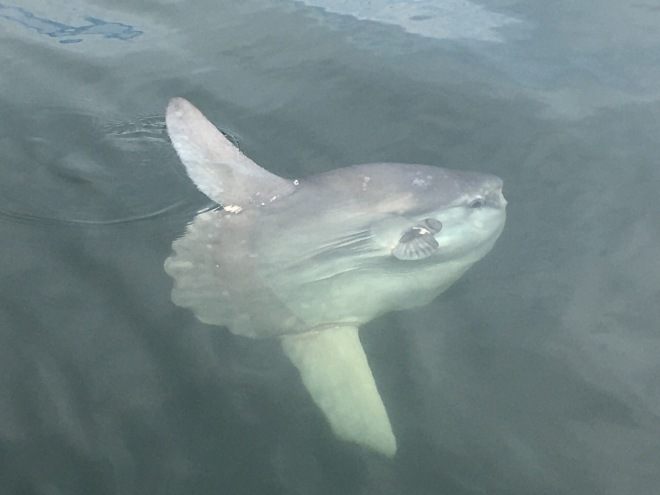 No … but something almost as scary … an Ocean Sunfish.  They were given this name as they appear to be sunning themselves while swimming on their sides near the surface.  This one appeared to be a youngin’, as adults grow to over 6 feet. This photo is not distorted – they have a very unique roundish shape, including their distinctly shaped tail.

We had a few nice days here, but not as much as back then.  This time, no visit from Benj & Lily, no Celtic Festival & our favorite french bakery closed down last week  😦 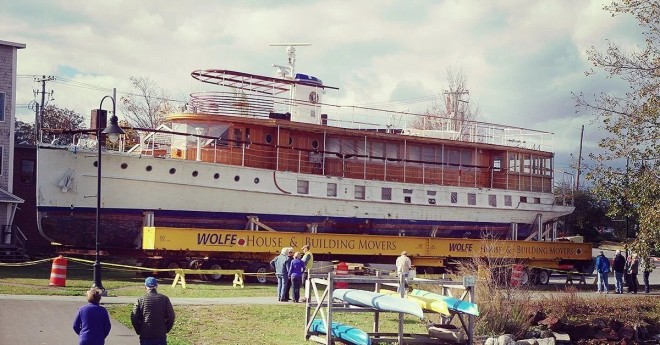 We often stumble upon unique surprises … now covered in shrink wrap within sight of our slip in Belfast is the USS Sequoia as she arrived 2 years ago aboard a barge from Virginia.  The Sequoia was known as the “floating White House” with 8 U.S. presidents using her between 1993 – 1977.  Numerous famous events took place aboard, including Roosevelt & Churchill planning D-day with maps on the salon table, JFK’s last birthday party & Nixon’s making his fateful decision to resign. You can spend a few hours reading the very fascinating history & viewing photos on-line from numerous sources.  After tens of millions of dollars & several years of restoration right here, she will be re-launched & cruise back to DC under private ownership.

Belfast will be our most “Down East” destination.  We’ll spend the next few weeks more slowly heading south stopping at all of the great spots we’ve sped by!

Have departed CT for Florida.  Plan to be in the Chesapeake towards the end of September.