We just had to spend National Donut Day (the first Friday in June for you amateurs) … researching!  22 miles north of us in Middletown is Neil’s Donuts. This, their 2nd location, is fairly new so we had never been.  Wow!!  While they don’t look like much due to the way they (unfortunately) pile them into the box, they taste really, really good!  Very moist with fantastic flavors without being not too sweet. 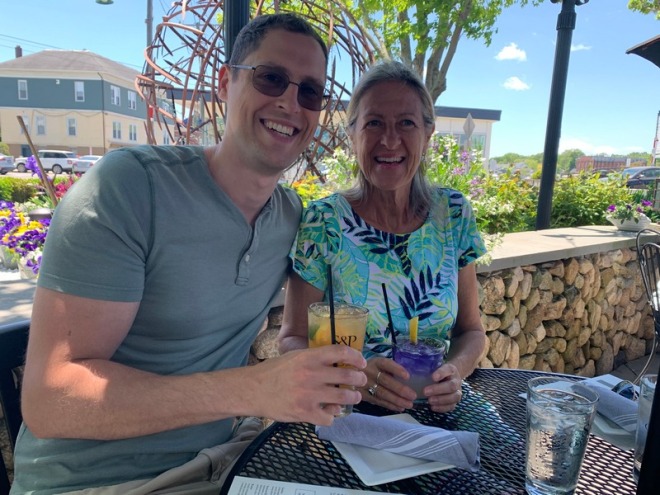 Even better was a long awaited visit from Benj!  COVID cancelled his usual Florida/Bahamas winter visit, so it’s been nearly 9 long months!

We crammed a lot into our fun week together, including a full day in Mystic.  For lunch we enjoyed a great meal at the S & P Oyster House, our go-to Mystic Restaurant for over 20 years, way back when we would take our Sea Ray powerboat to Mystic for the weekend.  Of course, we had to stop at Sift Bake Shop.  Chef Adam Young recently won the Best Baker in America competition on Food Network, so everything tastes as good as it looks.  They now 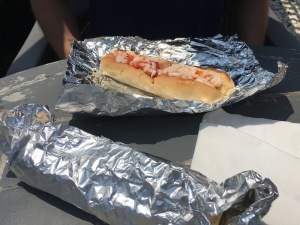 have a large 2nd floor deck with comfortable seating so you can enjoy the view of the Mystic River along with your treats.

Of course, Lobster Landing in Clinton was another required stop with their famous lobster rolls.  Yes, Benj ate both of them!

We didn’t only eat … one day we took the Chester Ferry across the Connecticut River to hike the Gillette Castle State Park in East Haddam.  The “castle” was built in the early 1900’s by William Gillette, an actor best known for his on stage portrayal of Sherlock Holmes.  He personally supervised it’s construction with features

which include 47 unique doors each with wooden “trick” locks he designed & passageways with series of mirrors allowing him to view visitors so he could ensure his theatrically appearing at the appropriate moment.  Even though I’ve visited dozens of times over 50+ years, I’ve never walked this portion of the property thru his (now abandoned) train tunnel.  Gillette was particularly fond of his 3 mile-long narrow gauge railroad, offering rides to his visitors which included Albert Einstein, Helen Hayes & Charlie Chaplin.  Even though he spent over a million dollars (around 30 million in today’s dollars), 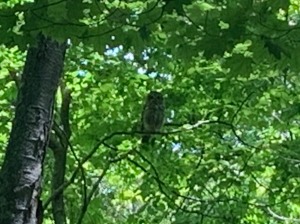 he loved it so much that his will detailed that the State of Connecticut could buy it for only $5,000, rather than selling it for millions to any “blithering sap-head who has no conception of where he is or with what he is surrounded”.

During our hike, we noticed an extremely oversized birdhouse high up on a tree. What the heck…?  Seconds later the answer became apparent as this large Barred owl flew out to a nearby limb keeping an evil eye on us – perhaps guarding her little ones still in the nest? Certainly a fascinating creature & only the second time we’ve ever seen one in the wild.

We always notice more unusual nature when Benj is around.  While grilling dinner onshore at our marina’s grill, we noticed a beaver swimming by.  Certainly not a common sight in the wide Connecticut River.  He let us follow him a bit & watched while he took a break, resting on some rocks. He soon tired of us & dove down & away, never to be seen again … until … the week later while kayaking a nearby creek, I spotted a newly constructed, “tiny home” – perhaps his starter lodge? 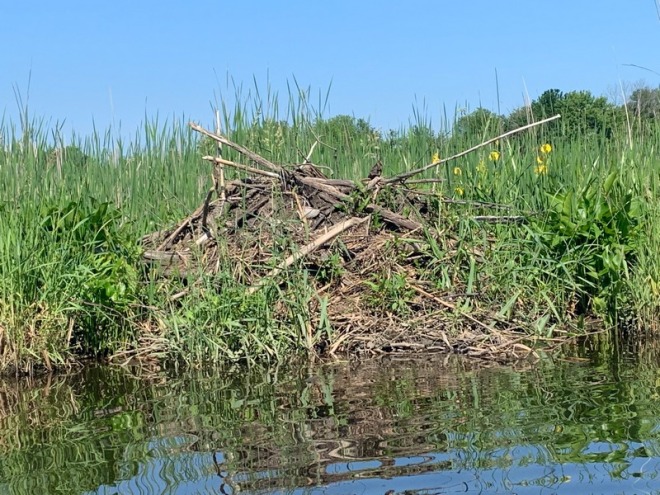 Researching on-line, we learned the young remain with the adults as a family group or colony until their second year  At that time, the adults drive the young beavers out of the territory, forcing them to migrate and search for mates and unoccupied habitat in which to establish a new colony.  So our friend is likely a 2 year-old freshly kicked out, beginning his new adventures! 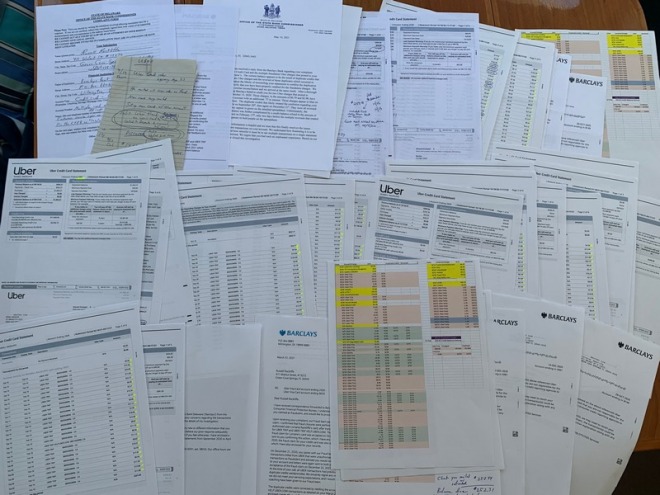 Do we get to relax much while at a marina for a whole month?  We always hope to, after cleaning, projects, engine work, oil changes, etc.  Somehow though, there is always more to consume our time.  This paperwork is just a portion of my 8-month battle with Barclay’s Bank with whom we had Uber branded credit cards.  Having a credit card scammed is, unfortunately, a too-common occurrence. While a hassle, you usually simply cancel the cards, let your credit card company know which charges are fraudulent & wait for replacement cards in the mail.  Not so with Barclay Bank.

They must not have any fraud detection software, as they didn’t notice a sudden blast of dozens of Uber rides with amounts as low as 93 cents (Hint: you can’t take a 93 cent ride!).  I immediately called to cancel our cards, but they wouldn’t cancel Lori’s, as they insisted it had a different card number, thus not affected.  Of course, the next week Lori apparently took dozens of Uber rides in Australia!  We then cancelled our accounts completely, detailing the stack of fraudulent charges.  Their customer service is the worst I’ve ever dealt with. Long story short, all these months later, they have charged, credited, re-charged, refunded , re-charged again with now 100+ transactions to sort out.  Moral of my story: If you have any credit cards thru Barclay’s Bank, I would strongly recommend cancelling them!

At our marina in Deep River until we depart after the 4th of July weekend.