We had an uneventful 56 mile trip from Royal Island to Little Harbour, Abaco in very calm conditions.  The wind forecast of 4 knots, gusting to 5 knots was right on the money.  Perfect for our little power boat, but the other dozen boats were “brave” sailboats, most with their sails up flopping uselessly.  It was funny listening to them on the VHF radio talking as if the forecast had been way off…

I’m glad I caught those Mahi on the way south, as I’m only hooking & losing on the way north. Again, I hooked something big, this time losing my old, faithful cedar plug when the line snapped.  Cedar plugs are sold as unpainted cedar wood with a weight built into the lead end – very simple.  Not having any paint aboard, I painted it with Lori’s “mint candy apple” nail polish with some red highlights.  Surprising, it’s caught quite a few fish – unfortunately barracudas especially liked it, hence the large tooth scrapes.

A few miles out of Little Harbour I spotted this strange contraption being towed a few miles out.  Even with binoculars I couldn’t tell a thing.  An hour later, surprise, surprise it was only 100′ away coming right by us! 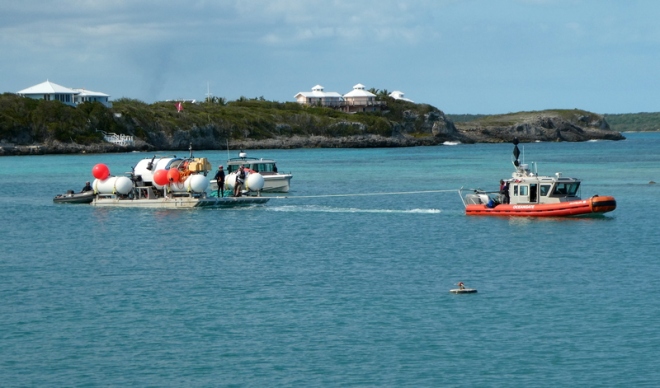 Later on we were able to dinghy right up to it.

It took a Google search to figure out what the heck it was.  It’s the new Titan Submersible “the only privately-owned 5-person submersible capable of reaching depths as great as 4,000 meters”.  That’s over 13,000 feet!  It is used for site survey & inspection, research & data collection, film & media production as well as deep sea testing.  While it may look as though the sub is being transported on a mini barge, it’s actually a launch & recovery platform – the whole thing is lowered down 30′ below the waves, then the sub detaches, continuing the remaining 12,970′ on it’s own.  One aim is to allow the use of a smaller support ship – no large crane is needed.  The 13,000′ depth is important as … that’s the depth of the Titanic.  Later this year it’s headed there to further explore the Titanic, first with their own personnel, then with Woods Hole Oceanographic Institute scientists … then … you can go (for only $100,000!).  Not sure what it is doing here, but likely continued testing as the water is over 14,000′ just 12 miles out of Little Harbour.  Lots of interesting info, photos, news stories & video on their website http://oceangate.com 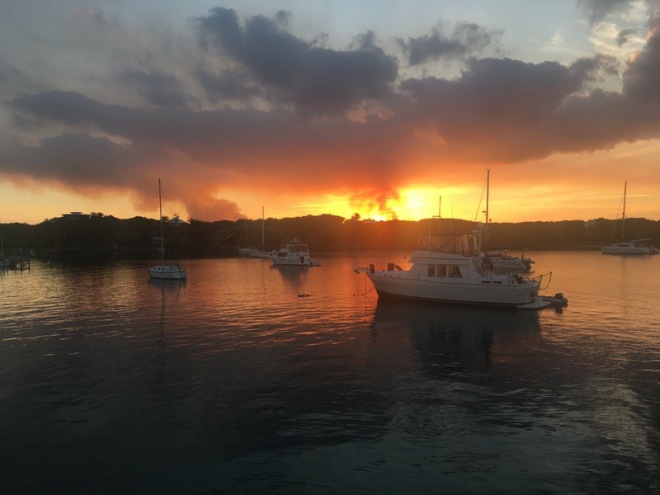 Little Harbour is unfortunately being changed forever by developers from nearby high-end properties who thought it would be neat to offer a waterside clubhouse with boat slips.  While locals fought it for several years with a “Save Little Harbour” campaign, money usually wins out both here & in the U.S. 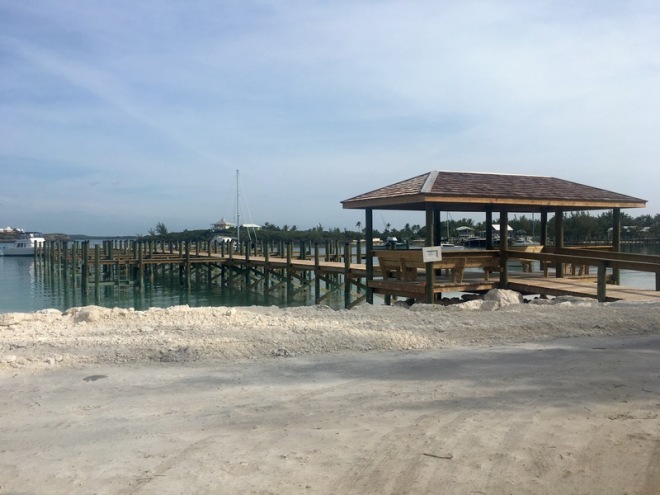 This is just one of 4 sets of new docks – not sure if all the same developer. 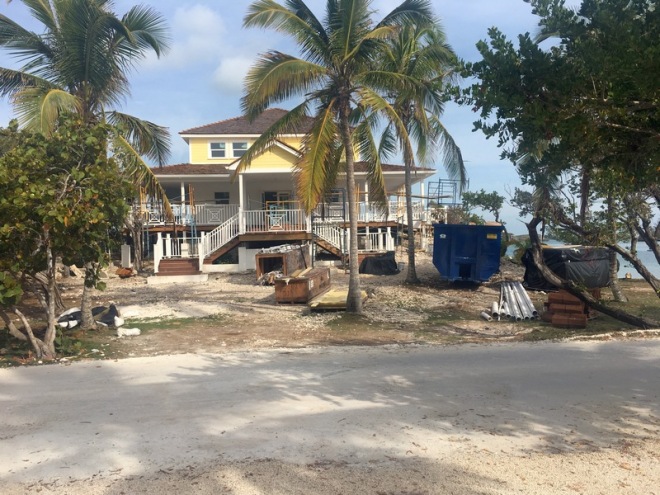 The primary reason we always stop in Little Harbour is Pete’s Pub.  Lori has featured it with photos many times & it recently won 4th place in (yet another) contest of Best Beach Bars in the Caribbean (even though the Bahamas is not).  In addition to being a fun place with good drinks, the food (especially fresh fish) is always really good.  There weren’t many cruisers this time, but it was mobbed with crazy spring breakers – we only stayed one night.