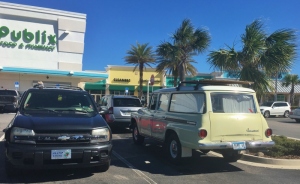 We come upon the BUMs when we take the marina courtesy car to shop. Allie & kids, no Pat-we should have stopped then.

If you’ve been following us you know about the Bums, right?  If not sure, then check their blog that’s been up and running for oh, must be at least 12 years, since they headed off on a sailing catamaran named Bumfuzzle, to circumnavigate. First, just Pat and Allie circumnavigating, then they changed gears and modes of transportation several times, but always some very vintage-y cool vehicle, like a Traveco, or a VW Bug. Across the country, to Mexico, across the pond and back- when oh, Allie was due with Ouest, who is now SEVEN! Then along came Lowe, so now the perfect family of blonde Bums. There’s so much more to their story, you will just have to read it for yourself.

How do we know about them? Well, several years prior to 2010 we needed to figure out “how much would we spend out there?” Keep in mind this is before blogs, when people just had a website. Pat had the knowledge and background to construct a great site, even had a “Buy us a beer” feature. One thing they did that almost no one else did, was to put up a page that showed their spending by category; not very many categories mind you, but hey it was better than nothing. From that fateful moment on, Russ checked that blog regularly. Jimmy Buffett was our musical inspiration, Latitudes and Attitudes (Lats & Atts) our monthly magazine inspiration and now Bumfuzzle.com was our online addiction! Buy the boat and we are good to go! 🙂  Oh wait, we bought their book too and Russ had them sign it for me as a gift.

Imagine our excitement when we read the latest news; they’d bought a Grand Banks 42 and would be cruising Florida and Bahamas! Good news: the boat is located in St Augustine, Florida. Bad news: Irma is on her way. Good News: Boat is in a snug and sturdy marina, one that we’ve been to and were planning to visit again. More Good News: The marina sustained next to zero damage and all boats were fine- yay!  Bad News: even with several attempts we never did get to met the amazing Bums in person. But hope springs eternal and as long as they are on the East Coast, it may happen.

There you have it; just some background for you as I take you through Florida.

After leaving Jekyll Island (and the fog) behind we crossed the FL/GA line south of Cumberland Island, sans musical accompaniment.

While we didn’t see much worse than this (below), had we ventured up the St John’s River (Jacksonville) or down into the Keys, the sight would be heartbreaking. 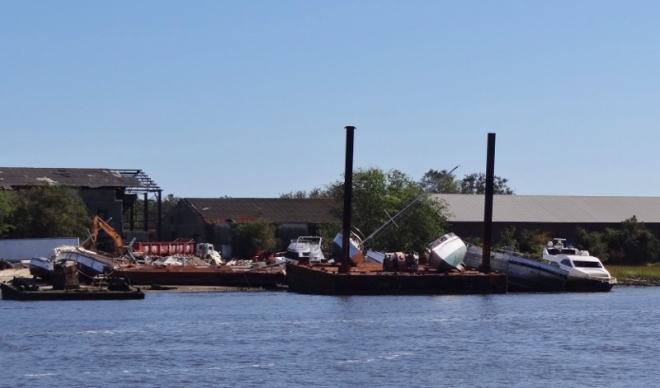 Hurricane results as we come along Fernandina

Just before this spot is one of those sections where we are happy to have Navionics running on the iPad, and to be a shallow draft boat. Hoping the dredge will continue north around the corner. 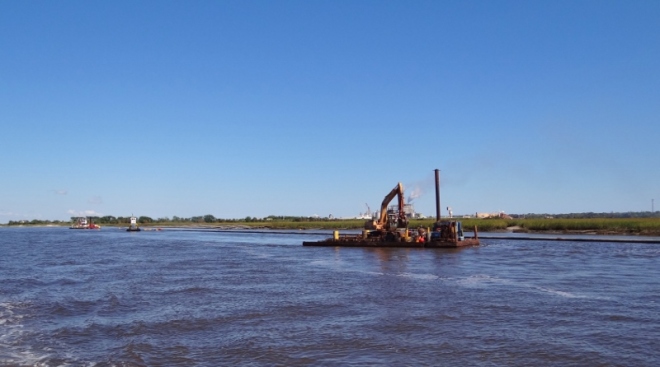 The tide was nearly high as we transited the Fernandina area but almost low through Sisters Creek. Not much wiggle room as the northbound tug approached us, so Russ slowed to a crawl and moved over as far as he dared- into 4 1/2 ft- yikes. A few minutes later I looked back to see the tug getting his comeuppance for pushing us out of the channel. 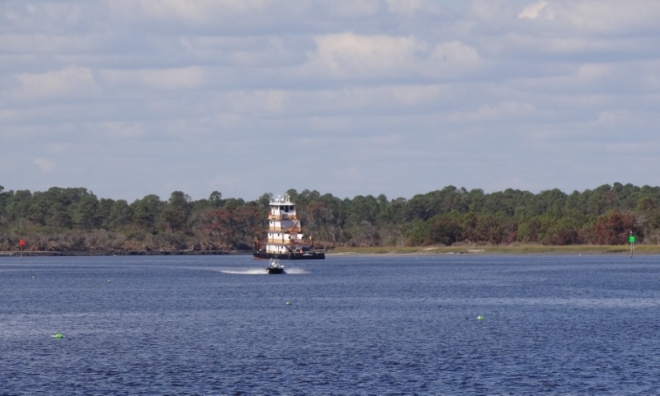 Soon after making us nearly go aground, the tug receives payback. AIS showed him stopped and stuck …..

We’d snagged the last slip that was wide enough for us at Camachee Cove Marina and Russ backed in like a pro. The marina isn’t within walking distance of downtown St Augustine, but either Uber or Lyft will only set you back $8 one way. Everything else about the marina is “what’s not to love?”.  I was thrilled to receive a second highball glass in the goody bag as now we have two glass drinking glasses that fit where I keep them. 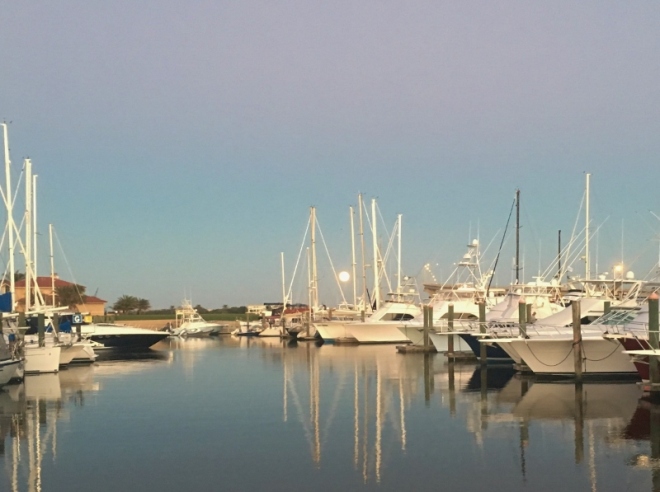 Full moon brought a king tide one morning that kept us aboard until the water receded enough so we could jump off the floating boat dock onto shore. Eventually the ramp became usable again. 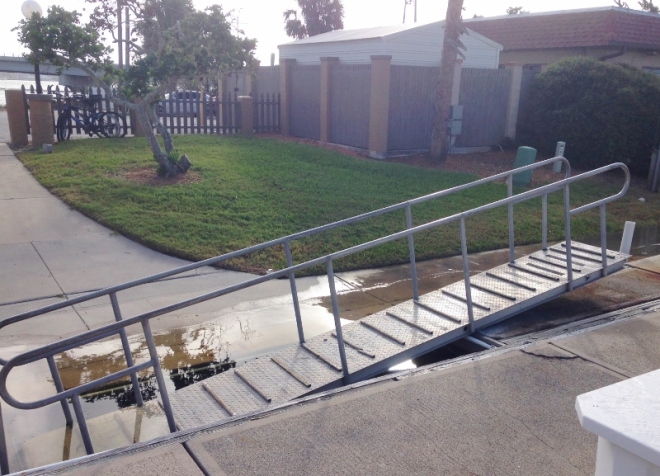 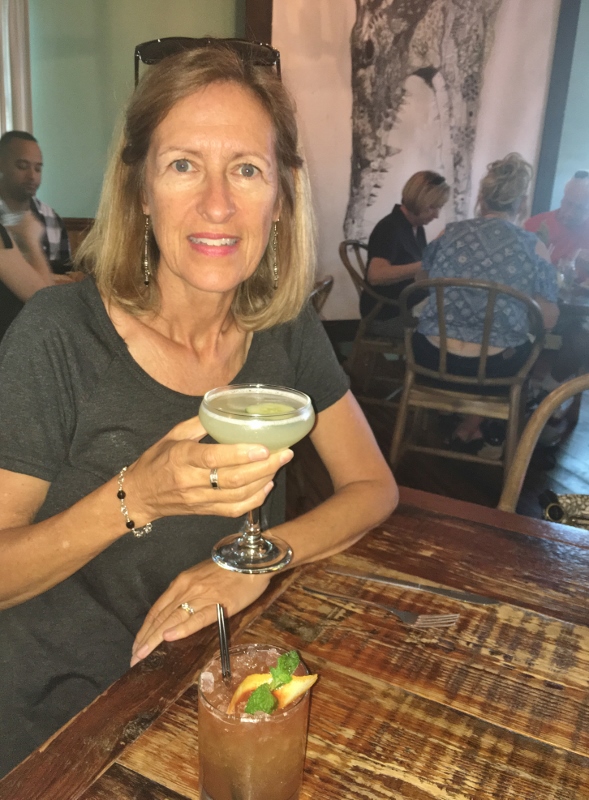 Lunch and libations at The Floridian. Love my Garden Gimlet made with St Aug Distillery gin

Flagler College is very impressive but that’s because railroad magnate Henry Flagler built it as the Hotel Ponce de Leon, going all out with scads of imported artisans and craftsmen and the best architects from NYC. Built in 1888, the hotel was a resort like no other. More than a place to stay- it was an exclusive and opulent playground for the world’s most privileged elite. Eighty years later, the college was founded and has no doubt invested millions in restoring and preserving this architectural wonder in the heart of St Augustine. 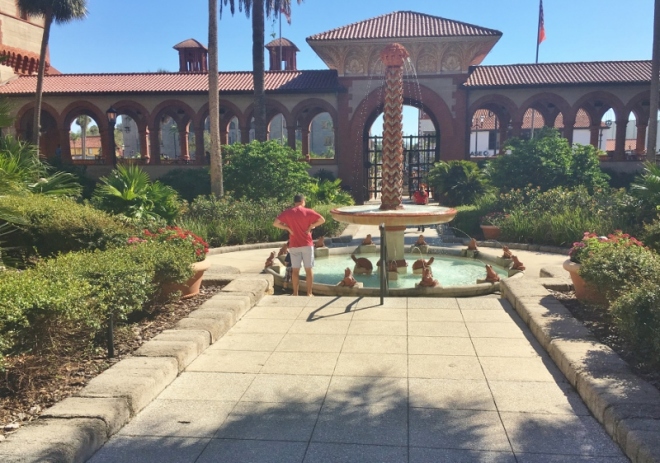 Fountain inside the main gate entrance. Behind me is the bldg entrance door way 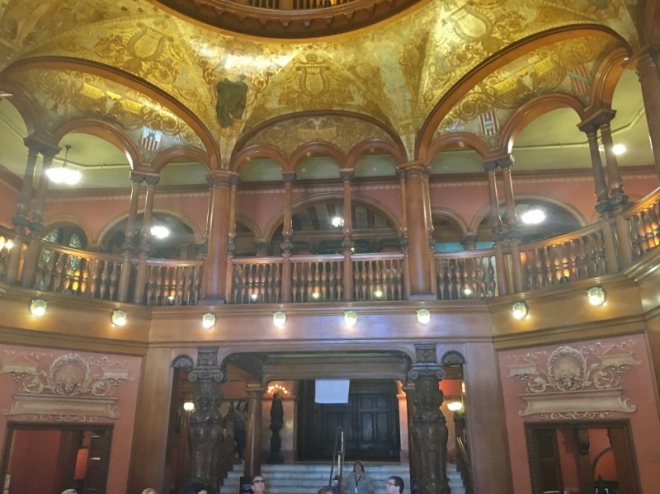 Guided tours are offered twice a day. We missed the 2pm tour, so a tour will be on the list for our springtime stop. 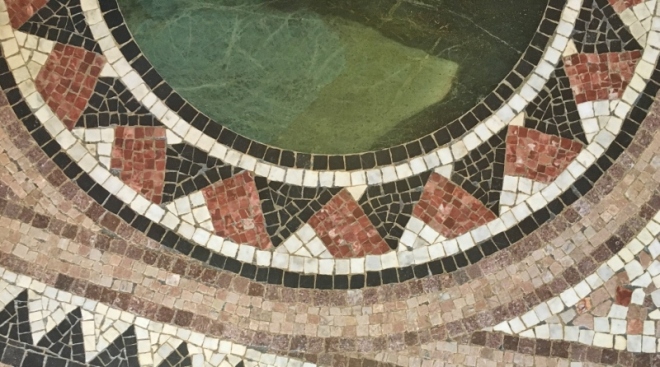 Can you find the mistake in the tiles? Searching for mistakes is a common student diversion.

I’m gonna remind you how lovely the Mosquito Lagoon is and we love traveling through it on beautiful days to better see and photograph its wildlife residents- like dolphins, manatee and birds of all sorts. 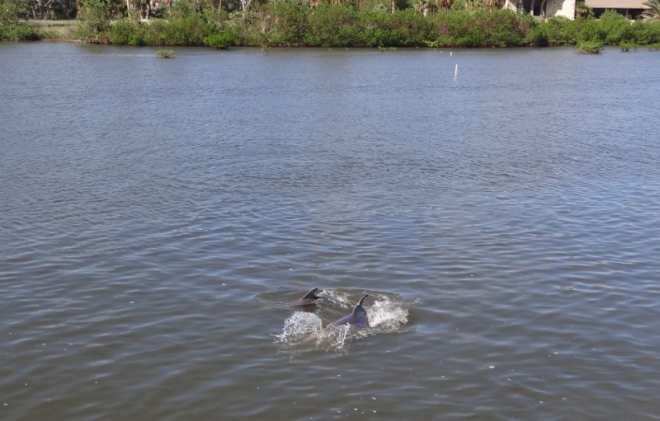 Sometimes I get kinda lucky. Mama and child.  Been spotting more young families than usual lately

At the end of the Lagoon you use the Haulover Canal to get over to the Indian River of grapefruit fame. 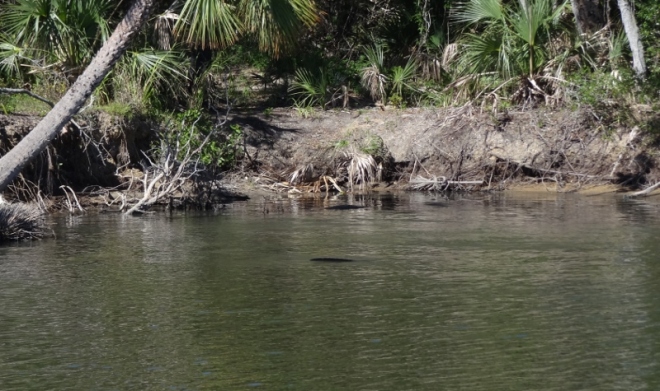 I know you can’t see the manatee in the above photo, but I was zoomed in to take that shot. Hadn’t refocused yet when a manatee surfaced at our bow where I just happened to be standing, camera ready- but oh bummer too zoomed. Would have been a good shot otherwise. 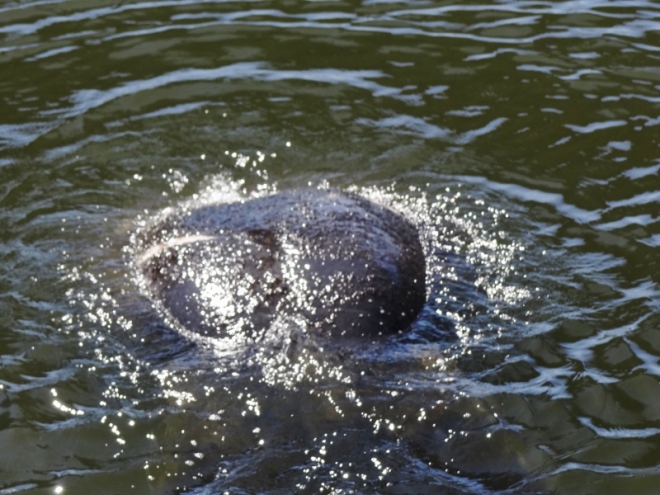 Just after exiting the short Haulover Canal, where only a very few locals were fishing: 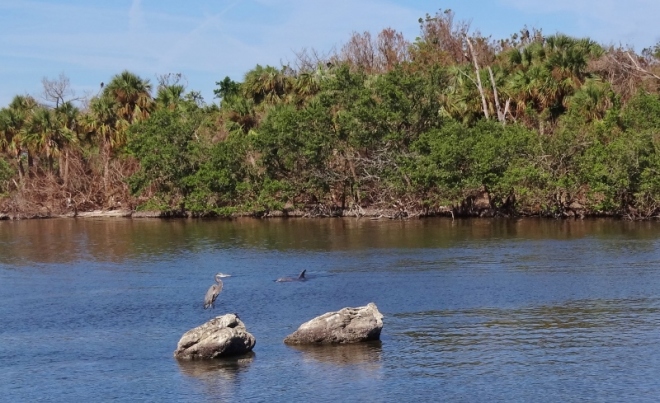 Yay- a two-fer! Great Blue Heron and Dolphin- bonus if you spot the Bald eagle in the tree!

Our month’s reservation at Ft Pierce City Marina was due to begin Nov 13 but since we were in the neighborhood early and the weather was going to deteriorate, we decided to go early. That meant just one night at good ole Velcro Beach where we took the bus to Publix and tried to open accounts at a new bank. More on the “establishing residency” process later. 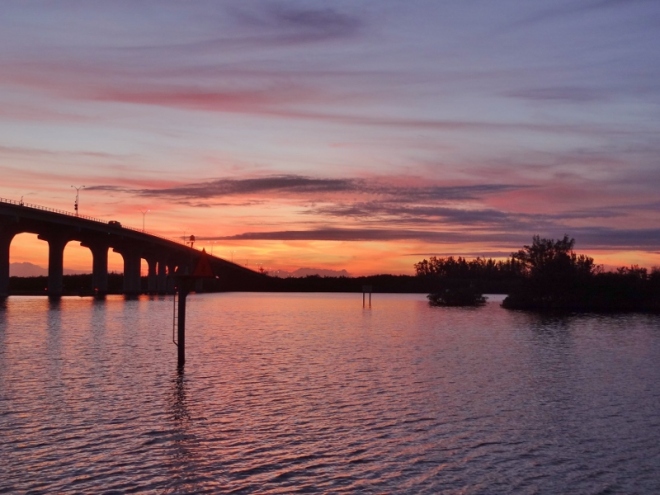 Our one night stay at Vero Beach. We couldn’t miss stopping and ruin our perfect record!

Thursday, Nov 9 we arrived at FPCM, “A” dock, our home for at least the next 30 days. Power, floating docks, good wifi, laundry, secure, on-site restaurants and 15% off gift shop purchases- happy us. Packages would be arriving shortly- thank you Amazon, and others.

We have arrived at our southern-most destination in the Bahamas: George Town, on the island of Great Exuma.  We plan to be here for most of January & February, as our basics of groceries, propane, beaches to walk, friends to visit & several safe anchorages are all available.

NEW:  The map below shows our approximate location in full color! Click to zoom in, out or make full page.