They do look a bit vulture-like 🙂

Monday turned out to be a good travel day- no rain, thunderstorms or heavy winds for us thank you. Today we’d do three locks with the last two, C9 and C11 bringing us down to a lower elevation at Whitehall, NY. Would going down be less stressful than rising? Would I look out over the lock wall and see the dam? So much to worry! All for naught though. Dropping down is better! Less turbulence as the water flows out and we never got pushed too hard against the lock wall (Russ’s concern) which might pull the fenders up.

This was a unique bridge, and yes we fit under 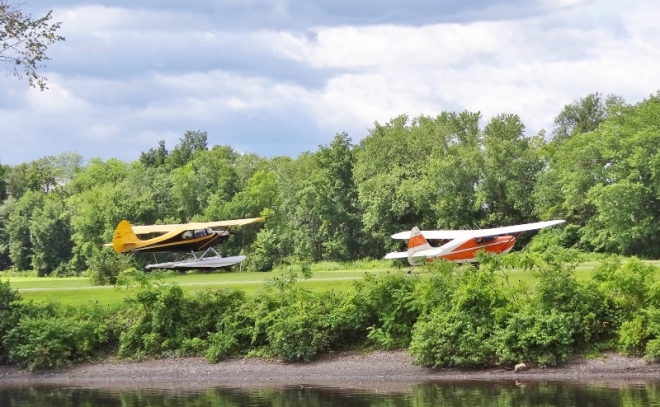 The highest elevation- Lock C8 at Fort Edward. One done, two to go for today. 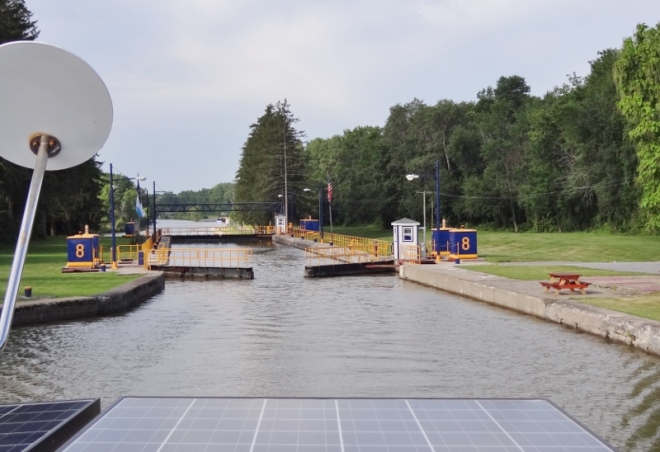 Keep left to avoid the netting!

In the above photo you get an idea of how narrow the canal is. Imagine how skinny the original canal was at 40ft wide at the surface, 28ft at the bottom, with a depth of only 4ft. 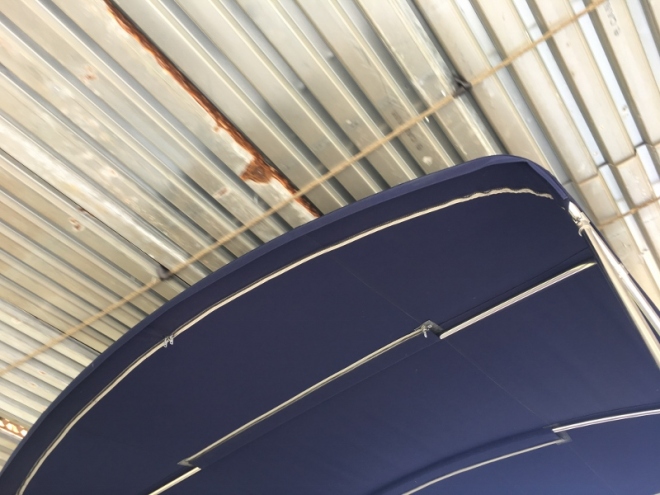 Pretty close under that one!

Fort Ann docking option is much like Fort Edward. It’s roughly 40% of the way between Fort Edward and Whitehall. Might be a stop on the way back.

Herons started to become prolific, eagles not so much and still precious few osprey. Caught a fleeting glimpse of turtles sunning on fallen trees by the shore.

Pretty side waters of the Canal

Mountains everywhere! Not the usual scenic background we are used to. Lovely though.

Whitehall bills itself as the birthplace of the U.S. Navy. The free public cement dock offers three power pedestals with water; we took the northern most spot. These cement dock walls, called “terminals” weren’t built for pleasure craft but to encourage commerce back in the day. Now, with little to no commercial boat traffic between Waterford and Whitehall, the walls make a great place for pleasure boats to tie up. Waterford also provides two floating docks on either end of the terminal wall, for smaller boats and kayaks, etc.

We weren’t alone for long! 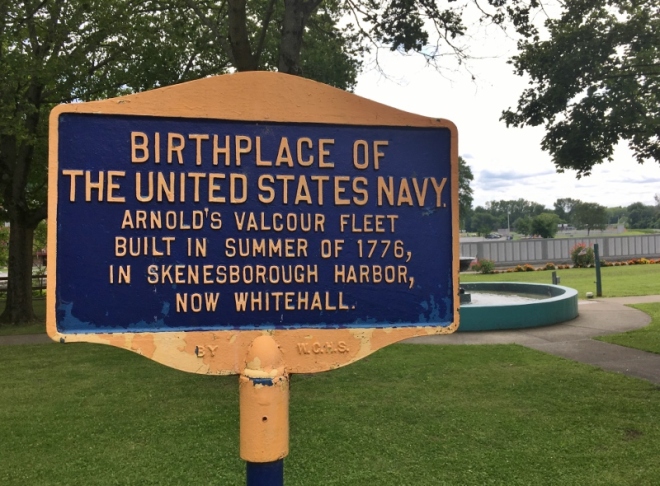 With two nights planned in Whitehall, we had plenty of time to check out what little the town had to offer. 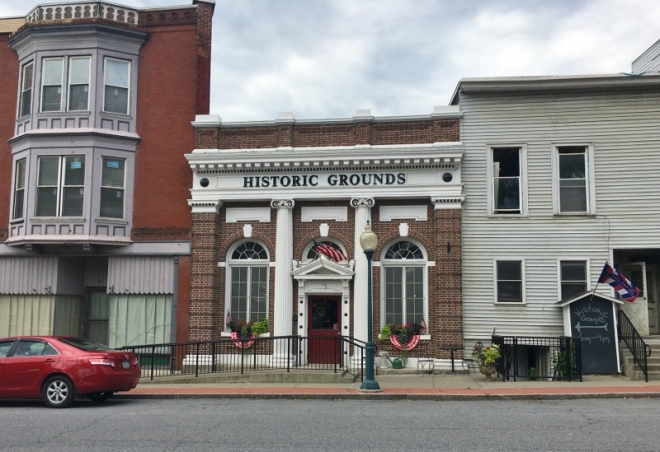 Historic Grounds, a breakfast and lunch spot located in a former bank building across from the town park/docks enticed us in for lunch and for breakfast the following morning. 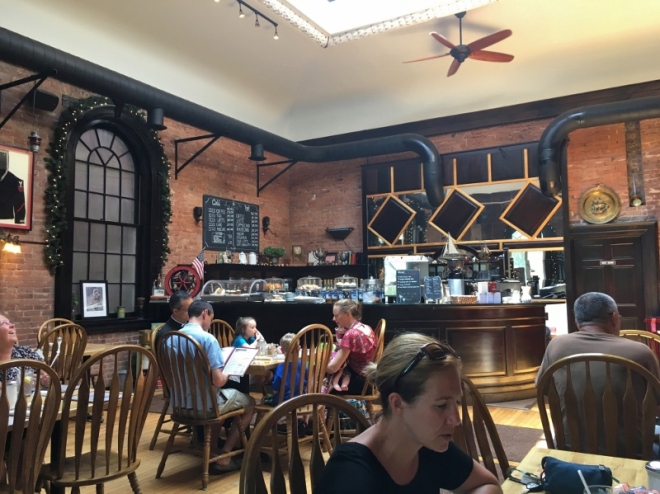 Huge portions from a moderate and creative menu, prompt, friendly service and you can order a popover at breakfast! Yummy baked goods at the counter widened by eyeballs, but I dared not even get close.

Russ had a little oops- for the second time in several days. But the breeze gently blew the shoe toward shore and he snagged it with a boat hook without tumbling in himself.

The final lock of the trip north would drop us down about 16 ft to an elevation of 96.5, according to our cheat sheet. Lake Champlain varies from this “normal” level during seasonal dry and wet times. Right now is a bit on the drier side.

Getting a sneak preview of lock C12 at Whitehall

The Amish have arrived! Sixteen families live in the surrounding area. Looks like they get out on the water

The Skenesborough Museum- oh wait let me backtrack. The Brit who founded what is now Whitehall was Major Philip Skene, who built the barracks at Crown Point, then sold his commission in the British army to establish Skenesborough in 1759. This was the first permanent settlement on Lake Champlain- the very bottom skinny portion, aka the most northern part of the Champlain Canal. Since it was on one of two routes between the English and French colonies, Skenesborough grew to be a thriving trade center.

After the Major and his family were “forced to leave” in 1775 the town was later renamed Whitehall; after an English something-or-other; go figure.

Then we ate breakfast. 🙂

Breakfast at Historic Grounds- or maybe I should call it an Historic Breakfast!

On day two of our stay, totally stuffed from that delicious breakfast (I had enough for my breakfast the next day)- and hey you couldn’t see in the photo, but the real Vermont maple syrup came cleverly served in an easy pour bottle.

Ok- back from my Dory-moment: we walked over to the Museum. A steal at $3, it offered just enough historical, balanced with items once owned by residents that were donated for the town’s bi-centennial celebration. The warehouse became the perfect display center, and when the event was finished, people said of their stuff, “you keep it.” And that’s how the museum came to be.

This shows roughly 90% of the entire museum portion of the building.

Whitehall- another claim to fame

Skenesborough Museum- first time we’ve ever seen on of these

Sure glad none of the machines I ever owned looked like this. But the parts are all very recognizable. 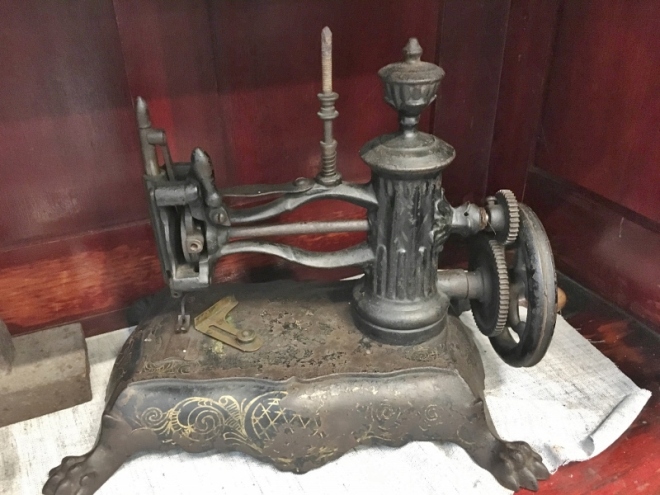 Looks like a fancy model with those claw feet.

Russ owned one much like this- boy he’s old!

Ladies- step right up and prepare for torture!

The following day, Aug 9th we’d do the final leg of our trip to the Lake. Only one lock, yay! And finally we’d enter into Vermont territory. Still to come: Lake cruising, excitement in the mooring field, visits with family and friends and a surprise auto.