Even pontoon boats do the locks

Mechanicville to Fort Edward would advance us 24 miles and 5 locks. Our elevation at day’s end would be 129 feet. Monday’s weather looked iffy so we planned to say 2 nights in Fort Edward. The town dock is rickety to say the least and we knew power and water were not provided, but we are self-sustaining in that regard and the temp had dropped enough so the A/C was only needed briefly.

Public dock at Fort Edward. The docks float so low, could barely get the fenders down that far

Fort Edward offered another docking option, but for us it was the greater evil. But either dock option was close enough to the Anvil restaurant, so that’s where we walked to for a rustic, step-back-in-time dinner.

On the way we snapped this shot so you could read more about the Champlain Canal. Ok, so only the left column is readable.

Rustic with an interesting history

At Fort Edward the Hudson turns east and the Champlain Canal really begins. You can tell. The canal is narrower, shallower and offers absolutely no place to anchor. Not that many options existed since Waterford, but maybe there was one or two.

Sometimes you do a bridge and a lock together.

Monday dawned a promising day and with only 3 locks and 20 miles to travel, we decided to push on, there being not much to do in Fort Edward. Before we headed off at 8:15, this tug and barge came by heading south. Happy we didn’t have to deal with him in the canal. So far we hadn’t encountered any underway since Waterford. 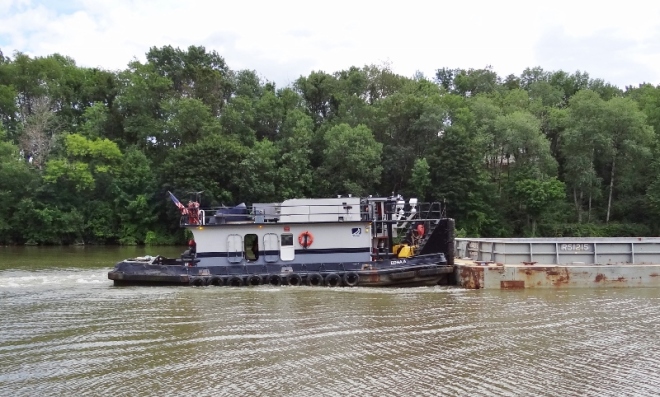