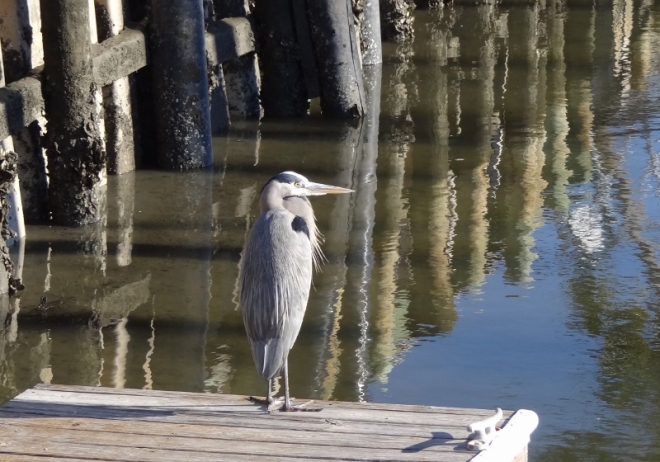 Since Oct 2010 when we began our full-time nomad lifestyle, St Augustine has been a faithful stop on every trip south and every trip north, except one; and that includes the 12 months in the motorhome. This time would be a longer stay in two parts and would include Thanksgiving. Yes folks, imagine that, we would not spend Thanksgiving in Vero Beach- gasp! Why you ask? Was this truly the year of shaking things up a bit and not doing the same old stops?

A couple of years ago the city of Vero Beach decided to limit the maximum size of boats on the moorings, to 50 ft. Well, that may seem smart until you realize that the mooring field has mandatory rafting and two or even three boats could be rafted together on one mooring.  Not a problem for us, but a problem for “the other TS” who we like to share Thanksgiving with. Last Nov they got a dock spot but the docks aren’t the greatest there, so this year when they said “let’s do the cruisers pot luck Thanksgiving in St Augustine”; we said sure! Ah what we do for our friends. 🙂 We reserved mooring balls well ahead because even with 90 moorings (no rafting here) they fill up.

Part I of our St Augustine stay was at Rivers Edge Marina, up the San Sebastian River which comes up the backside of downtown St Augustine.  Not a fancy marina, by any means, but within walking distance of a nearby Winn Dixie, a large fresh produce stand, an ABC Liquor store, a restaurant (Hurricane Patty’s) and a Metro Diner which serves up a yummy breakfast. And you can still walk into historic downtown easily. Yes, we did all those.

The Saturday we arrived is Nights of Lights and with flashlight in hand for the return walk, we headed to the green along with thousands of others; more humanity than we’d been bunched up with in a very long time. 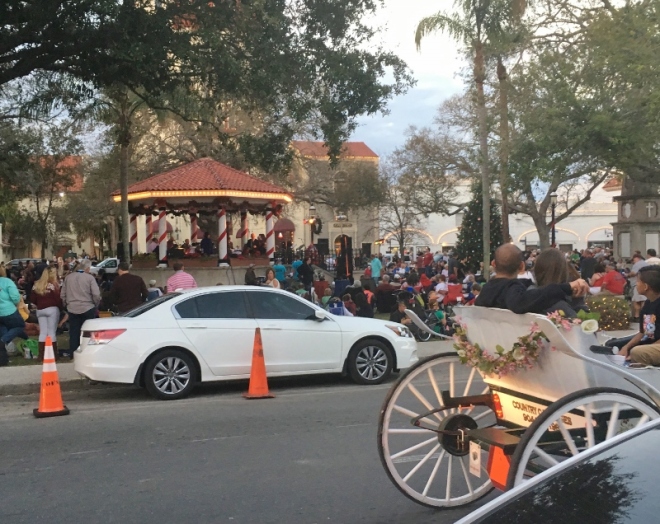 First the tree is lit, then all the lights are turned on- trees, buildings, bushes, you name it. This is big time lights. 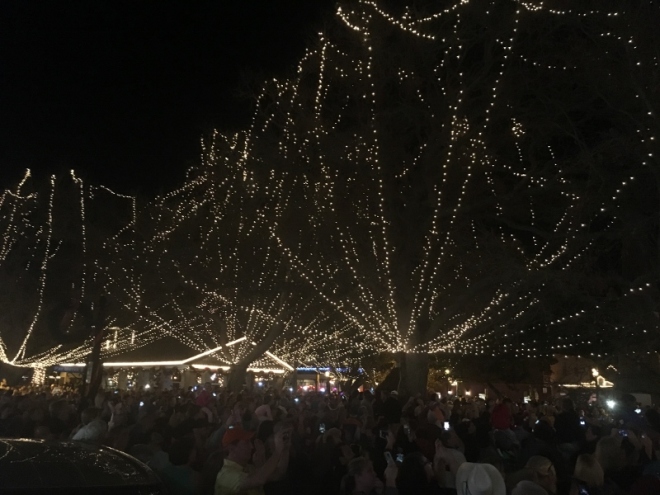 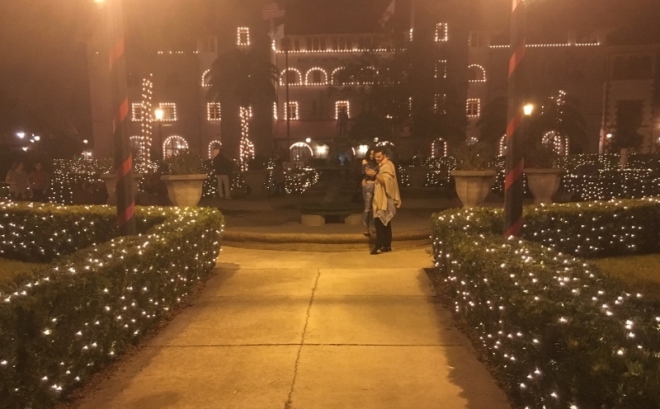 We worked on crossing to-dos; provisioning and finding a place to store non-perishable items. We have several airtight bins that fit under the flybridge helm, along with other stuff. Once in a while that space needs to be cleaned up and rearranged. Russ gets that job and he’s working on that while I’m doing laundry. He says as I step aboard, “bad news.”  My reply, “oh we ran out of room?” Worse than that I must tell you; a rodent!!!!  The evidence: chewed-on foam pads we had stashed up there; we use them as cushioning for the tied snug dinghy. I call it a mouse but Russ thought the sizeable chew marks indicated otherwise. Was kinda funny because just that morning Russ commented about the cat he saw and that perhaps mice were around.

We put foil over various openings after scurrying sounds indicated the critter had gone out for the night. And since then, no further sign of any rodent visitor. Whew. Can’t have mice on a cat now can we?

St Augustine Part II involved a strenuous voyage of 3 miles back down the San Sebastian and over to the municipal mooring field. Our assignment of M3 brought smiles to our faces as not only is it south of the Bridge of Lions it also affords a very short dinghy ride in. And then on Tuesday, the moment we’d been anticipating! Sing along with me, “Traveling Soul is coming to town, Traveling Soul is coming to town, the other TS is finally in town!”

They caught the 12:30 opening, giving Ann and I time to shop in the afternoon. 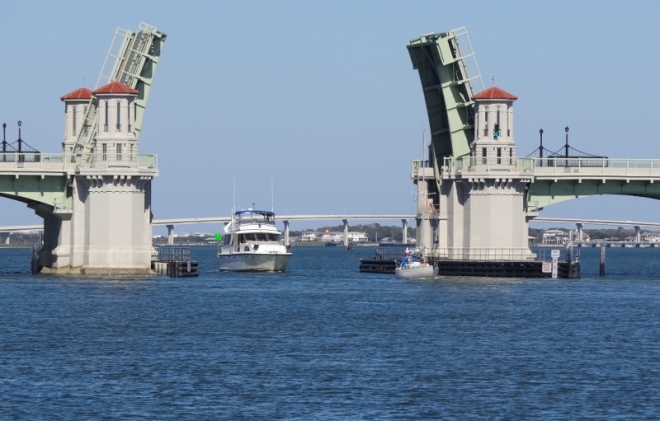 Assigned M7. Kudos to the marina who knowingly or not, put us fairly close together. A girl’s shopping trip was in order as was happy hour (or 2) aboard the “Bristol” Jefferson 52 (motor boats can be in Bristol condition can’t they?). Good times, great stories and primo G&Ts and V&Ts made with Ann’s homemade tonic. Not so much a drink as an experience.

Speaking of experiences, the four of us ventured out Wednesday on a 12 min walk up King Street to the St Augustine Distillery housed in a former ice plant. Besides the distillery the restored building contains the Ice Plant restaurant with bar and seating for roughly 50.

Opened in 2014; a very popular year for distilleries to open. This explosion of distilleries is astounding, with virtually none of the six or so we’ve visited over the last few years, existing in 2010 or even 2012 for that matter. Donuts, distilleries, dining. Triple D. 🙂 (however we love fresh lobster & Mahi too) 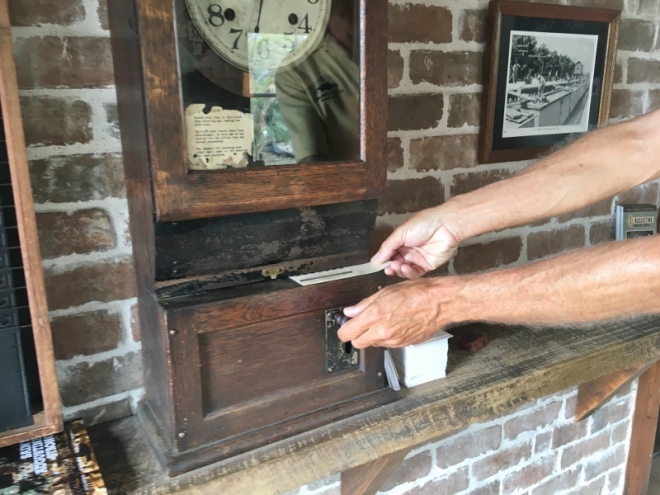 We punch in at the St Aug distillery 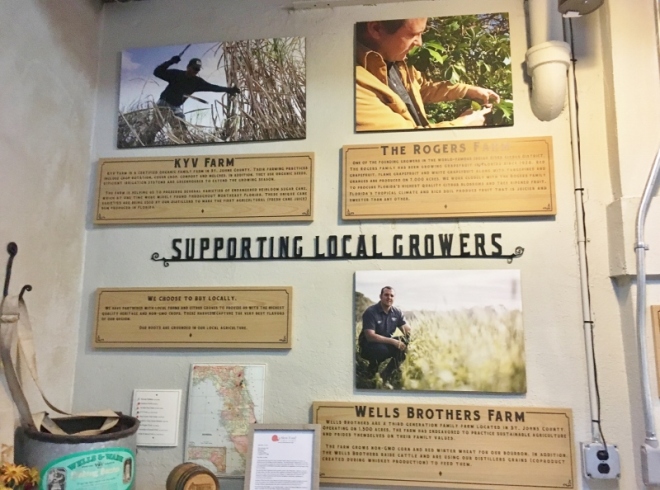 The distillery uses all Florida ingredients or as close to Florida as possible.

Our tour guide was an exuberant local woman who works at the distillery. These guys produce gin, vodka, rum and bourbon. 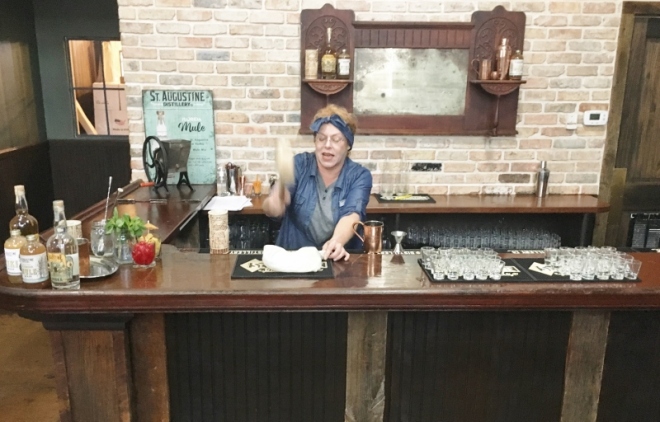 We learn about cracked ice and why size matters

We saw the usual equipment; fermentation and distillation tanks, bottling and labeling station and since bourbon is made here, lots of white oak charred barrels. To be termed bourbon the proof must be 80 or more. This bourbon is barreled at 110 proof and sold at 94. 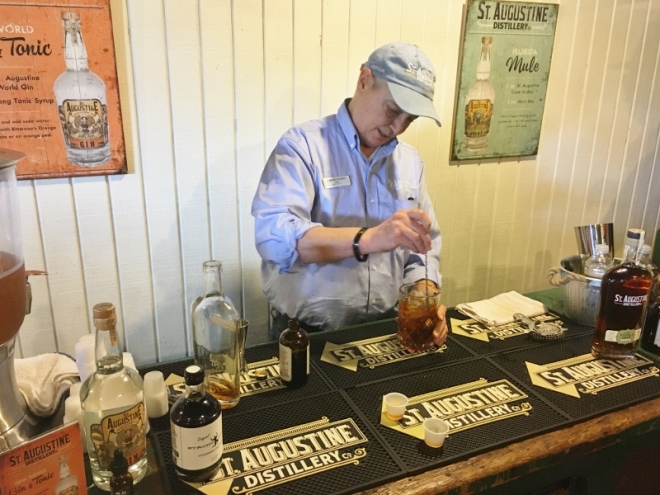 In the gift shop another man creates Gin & Tonic and Old Fashioneds to sample. Love this free tour! 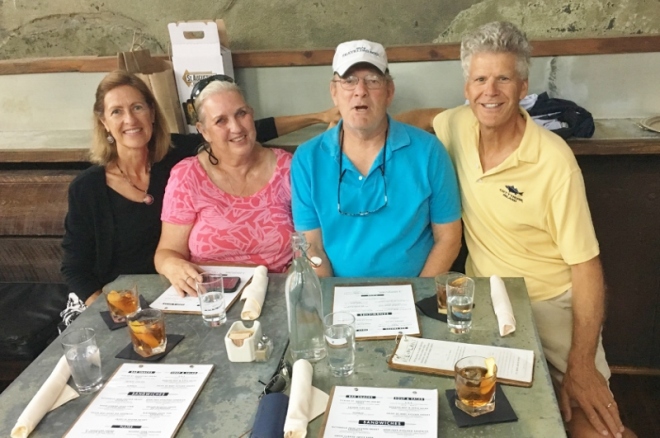 Lunch at Ice Plant- all in a bourbon state of mind. Old Fashioneds for all 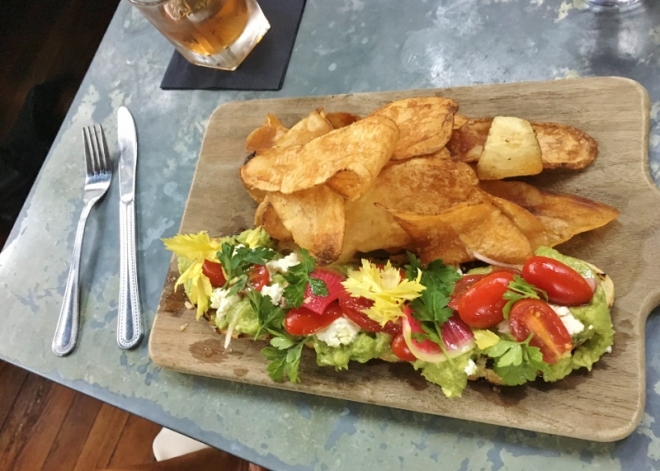 Then Thursday the reason for being here; we call it Thankful-for-Friends-Giving. This would the 4th annual St Augustine Cruisers’ Thanksgiving Potluck. Landlubbers roast turkeys and ham and the rest of us bring a side or dessert, chairs, drinks, plates and whatever else you need to have a good time!

The weather was perfect; maybe a teeny bit too much sun for some but considering rainy and windy would have ruined the day, this was ideal. The venue is completely outdoors at the City Marina, next to the mini golf with a view of the Bridge of Lions. 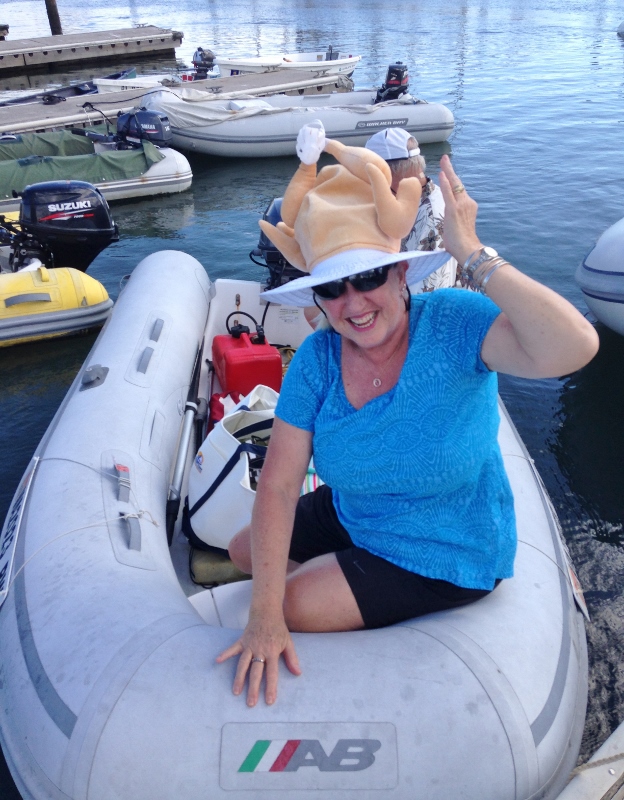 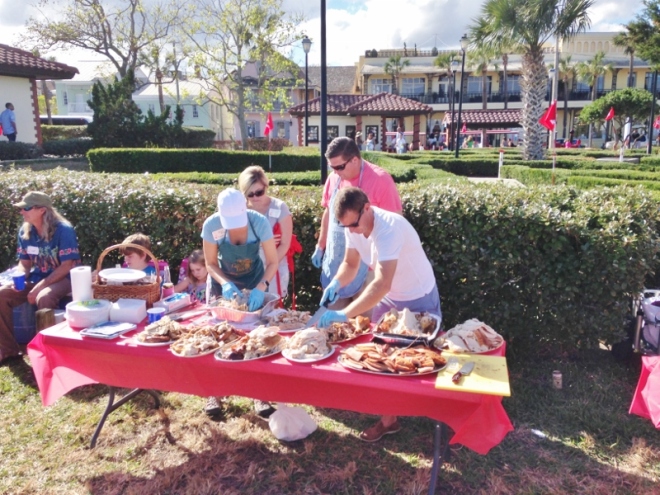 Mini golf behind the meat table

We met the daughter of Tom Neale.  He and his wife gave up their home and careers to move aboard their Gulfstar 47 Chez Nous in 1979. Since then, they’ve raised two daughters aboard while cruising. Tom is now editor at large for PassageMaker Magazine and columnist for BoatUS, but we first “met” him and his family while reading “All in the Same Boat”. Written in 1997 the book shares the Neale family stories of living and cruising aboard. If they could do it “back then”, we surely could too with all of today’s modern technology. This book was one of our early inspirations.

Melanie says this is the boring segment of her life right now! Compared to her growing up years, I guess it could be. 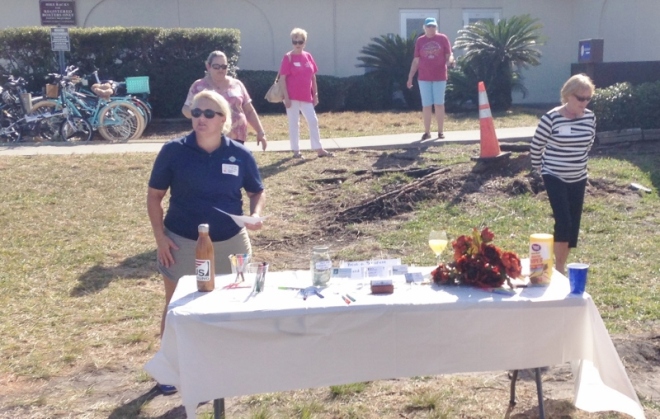 Ann’s turkey hat was very popular and received many accolades and a walking tour! 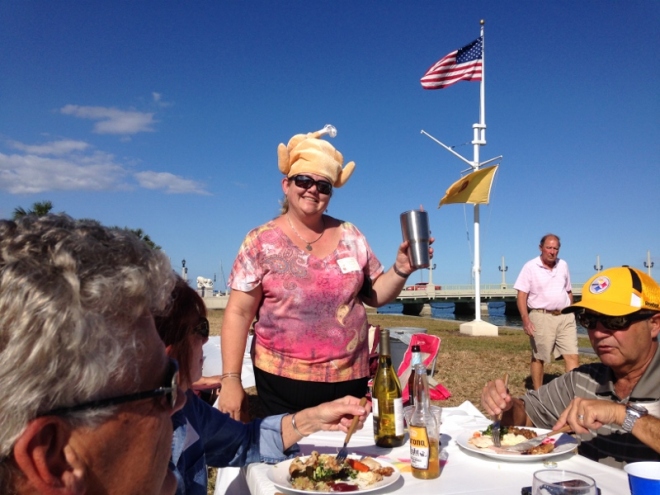 Hey can I borrow the hat and wear it around?

We made some new friends and re-connected with ones we hadn’t seen in a while. All in all everyone had a great time and the free Bloody Mary table was a huge hit; I just wanted the olives.

Friday we’d say good-bye and spend 2-3 days traveling further south to Vero (Velcro) Beach. There, crossing preparations would continue in earnest while we waited for a calm day to head over to the Abacos. How long would we have to wait? Days? Weeks?