Collecting the days catch- a full trap. Anchored in Stono River across from SJYH

Lest you think we only search for doughnut shops, I want to assure you breakfast isn’t the only meal we adore; happy hour rules the day on Twins. 🙂

Sometimes we have to be creative and go to great lengths to end up at a distillery. Charleston Distillery was easy, but Firefly is on Wadmalaw Island nestled just south of John’s Island. St John’s Yacht Harbor on the Stono River is our usual stop where we take the courtesy car for groceries and a visit to Firefly. Thanks to hurricane Matthew they lost 18 slips but are otherwise up and running. They offered all their guest services to boats anchored out. The typical anchorage near the marina has poor holding (as we discovered a few years ago (click here)), so we anchored across from the marina where the holding is excellent. Go figure.

Firefly is closed Sunday and Monday so we had a day to kill before we could go on Tuesday. “Oh let’s dinghy down the Stono River to the mouth and land the dinghy on the beach at low tide!” Uhhh, sure, let’s dinghy a greater distance than we ever have before and hope we have enough outboard gas. So we did. Eight miles!! Give or take- one way. Would have been a shame to waste a lovely day.

We found it!- Pig Beach of the southern U.S.

Low tide made landing the dinghy a small challenge but we got it to shore, set the anchor well and headed for a rather long walk down the beach. The shot below is looking back from the direction we came. 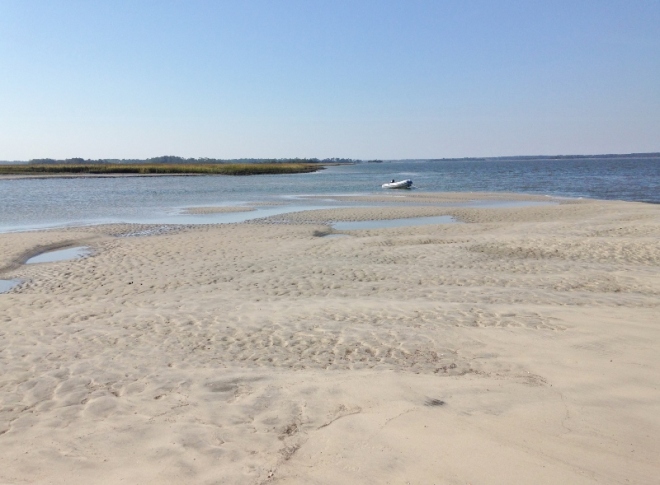 The beach continued even further than we had time to walk. This view is looking out toward the Stono inlet.

Firefly is an easy drive and we made a quick stop. No,we don’t need a tasting (have the double shot glasses, nothing new to taste), we’ll just clean the shelves of Southern Lemonade Vodka thank you. Hey, it’s only 60 proof, with a mild tartness. Perfect in iced tea, a lemon drop martini or concoct your own libation.  Oh and you can only purchase it at the distillery due to its shelf life.

So much lemon -keep cool, fridge after opening and watch that shelf date!

We departed our Stono River anchorage Wed Nov 2 bound for Morgan Island, aka Monkey Island. Given that our trip has been a tad on the boring side the Captain has a few off-the beaten-path ideas and today would be one.

We’d head the story from Mike & Ann on m/v Traveling Soul, and no doubt it was preceded by alcohol in some form; but we checked it out and ‘lo and behold, true that. The funny thing was we’d gone right past Morgan on our way to Dataw Island last May. Heading south on the Coosaw River, hang a left into Parrot Creek and continue around until you see the beach. If you keep going, St Helena Sound will greet you.

In the old days of the 1970s, rhesus monkeys were uprooted from their native lands and deposited on Morgan Island to be raised for research (off-island). The colony is 1,500 strong now; we’re not sure if that’s strictly native or if the colony routinely gets new blood. Most of the reviews indicated that no monkeys were seen, but hey you never know. Read more here.

As we prepared to anchor about 200ft off the beach, a man stood at the edge of the tree line in a bitch-wing stance. Uh what’s that you say? Ok, stand up tall and place your hands on your hips. Yep that’s it. And no matter how you feel when you do that, it clearly comes across as intimidating. He disappeared, we didn’t.

We took turns with the binoculars, hoping dusk would reward us. No such luck, but twice, strange sounds emanated from the trees that didn’t sound like any birds we’d ever heard, so let the record indicate, “monkey noises.”

The beach sign warns you not to harass, disturb or approach the inhabitants. 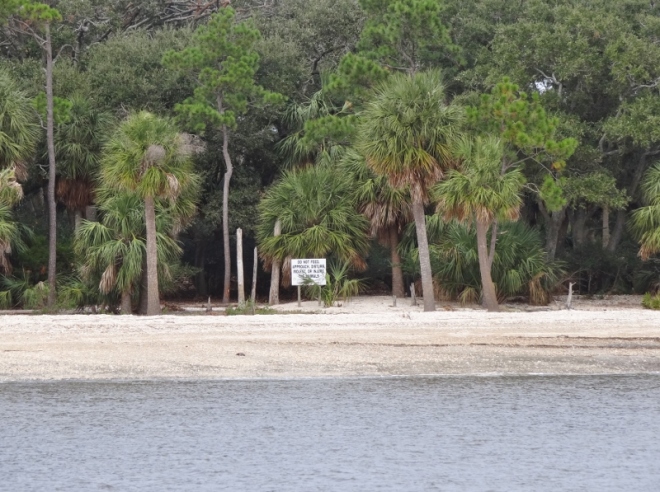 Observation Beach at Morgan, aka Monkey Island. No landing allowed.

Sunrise- so beautiful the following morning. Definitely happy the clocks hadn’t gone back one hour yet.

We remained on high alert, catching sight of bald eagles and herd of deer frolicking on the beach. 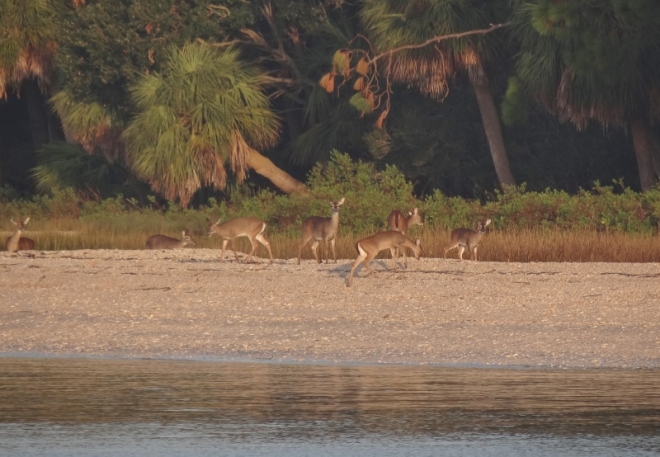 oh Deer! but no monkeys

After our no monkey business, Beaufort, SC was our stop for two nights at the Downtown Marina. Beaufort is one of South Carolina’s oldest and most beautiful cities, which helps you remember how to pronounce it (beautiful Beaufort). Again, no donuts, but we did enjoy two meals at Low Country Produce and strolling along Bay Street a few times.

LowCountry Produce on Carteret Street. Excellent, the best ever, She Crab Soup!

Our dock neighbor was a full time single-hander on what looked similar to a 34ft SeaRay. He asked if we were leaving in the morning because he wanted someone to follow. He’d left Barefoot Marina in N Myrtle Beach (summer home) headed for Jacksonville, FL (winter home). I’m thinking he’s worried about debris? Zooming along at 17mph. Doesn’t have a chartplotter? Nah that’d be crazy. But  nooooooooo..get this; he’s worried about pot floats and wants another boat to dodge them first!  Yes, moving along faster means you have really keep your eyes peeled, but we hadn’t seen that many and almost none actually in the channel. At 8kts we’d be too slow for him anyway.

Our maybe three night stay in Beaufort ended at two nights so we could spend quality time on Daufuskie Island, home of the world-famous Marshside Mama’s, and since 2014 The Daufuskie Island Rum Distillery! Mama’s is closed Sunday and Monday, so Saturday was it or bust. More like brrrrrrrrrr.  A mild cold front swept through on Friday; Saturday’s high temp was 65- just about right for bundled up outdoor dining.

Since our last visit the sign below was erected near the pier/launching ramp/docks. The island is flat and easy to walk. Next stop (a warmer one for sure!) we would like to see some of the historical places.

The Rum Distillery is near the H in Haig Point Rd, a skimpy mile walk.

The walk from the dinghy dock to the distillery is at most one mile, on a flat road. Golf carts are common (my kind of place) but the huge FEMA trucks carting hurricane debris (bushes, branches, leaves, etc) to the island dump confirmed what Tony told us at the distillery; Daufuskie suffered extensive damage. What we saw was so cleaned up that you’d never know a storm had blown through four weeks prior.

Which way?? Left or Right? Let’s do both! 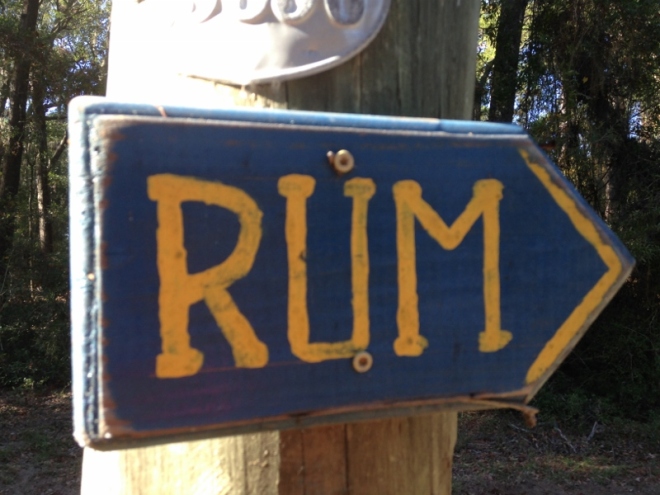 The distillery uses a reservation service and being a Saturday we figured just to be sure we’d use it and take the day’s last tour-4:30. They may have hosted 11,000 visitors since early  2014 but today we had our own short and sweet private tour. 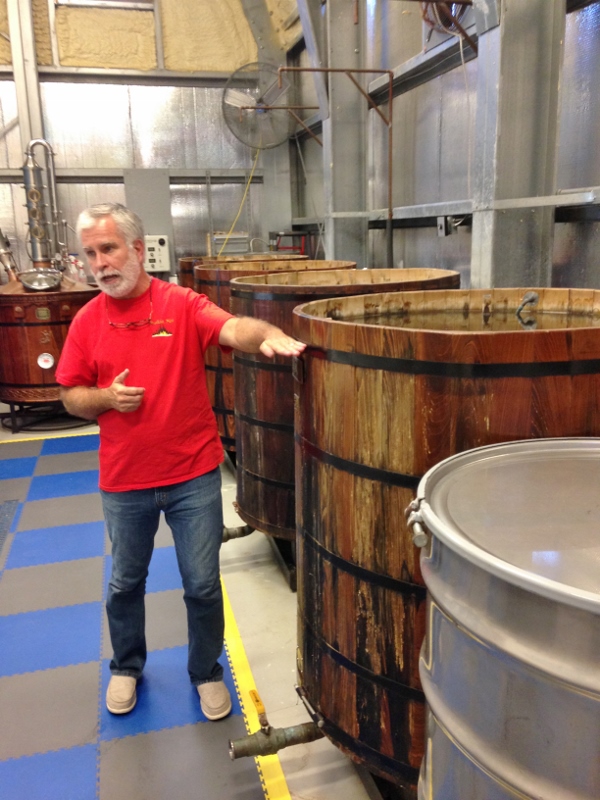 Owner, Tony gives us a personal tour. The white rum is bottled once a week, the Gold once a year. 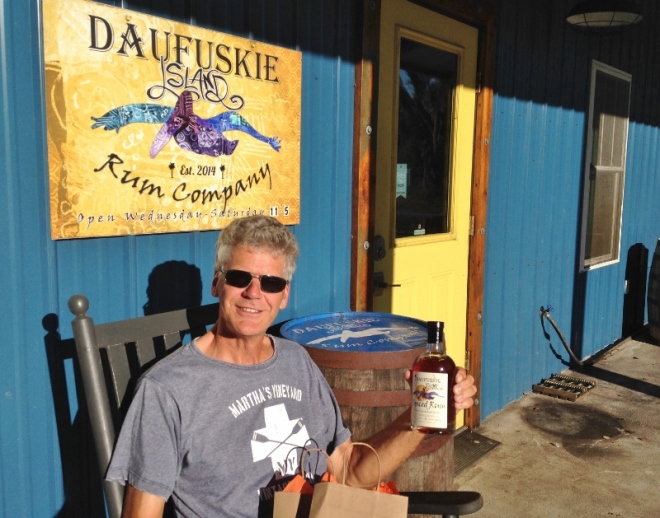 Our walk back to the dock and Marshside Mama’s produced a dose of southern hospitality in the form of a ride – in the back of a golf cart.  Our new friend was Sallie Ann Robinson: cookbook author, private chef, CNA, caregiver, mother, grandmother, and recently returned to her home, Daufuskie Island, after raising her children.

Such a lively lady. She gave us her card (I mean I’m about to move to this island) and while she searched to find one for us I should have snapped a picture-sorry. You can read about her here. With three fishing rods next to her, she was headed to the pier to catch something fresh for dinner. I’m sure success met her there.

When we stopped in May 2013 the place was jumping but now on a chilly November Saturday night, the action was happening inside but more at the bar than the dining tables. Next to no breeze was a huge plus. Speaking of huge- our portions- more than either could consume- made for an easy and tasty dinner the next night.

Read the cool back story on Marshside Mama’s here.  Be sure the read the lengthy process the bartender endures to bring the beer/wine/hard liquor to the restaurant.  I think Pete’s Pub has it easy in comparison!

Next stop- Savannah and then maybe another new island stop.