In between Peddocks and Bumpkin we visited Georges, Lovells and Spectacle. Oops I neglected to mention that many of the islands have picnicking and camping too. Peddocks has a large campsite area with all new sleep-six yurts for the ultimate in outdoor living. 🙂

Georges, a 39-acre drumlin is home to Fort Warren which strongly resembles Fort Jefferson (Dry Tortugas) and Castillo San Marco (St Augustine). The island provided a strategic location for defending Boston’s seaport. The French first helped fortify the island in support of the American Revolution, with cannons placed on the hill overlooking the harbor entrance. Fort construction began in 1833; in 1858 it was first used as a training camp and by 1862 as a Civil War prison for Confederate soldiers, sailors and political leaders. Modifications were made for subsequent uses during the Spanish-American War and WWI and WWII. By 1951 it was decommissioned and opened to the public in 1961.

The Bakery at Bastion C. It served from 1860s to 1900 before being replaced by outside facilities. 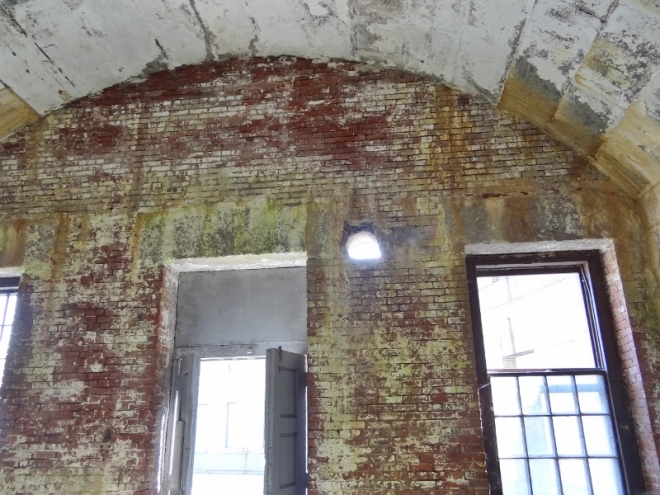 The fort covers much of the island and if you are a fort lover this one will have you spending the greater part of a day here. The large docks accommodate the small and larger ferries, 3 free mooring balls sit near the docks and the information center contains a huge display about the fort.

A small snack bar is open until 3pm and as with all the islands, carry off what you bring in. Even though we visited on weekdays the main attractions were plenty busy, especially Spectacle.

Boston Harbor Light is getting a facelift

The hospital was the only area with washable plaster over brick

Ortolan resting peacefully on a mooring at Georges Island

Since Lovells was just across The Narrows – the very deep original main channel into the harbor we dinghied over and once again had to beach it as only Bumpkin had a bit of space for a dinghy. Spectacle did too but we didn’t find that out until the end.

Lovells is a 62-acre island that is a favorite camping spot with trails through dunes and woods (on a small scale though), a lifeguarded beach, private restrooms and the ruins of Fort Standish. Yes folks we are overdosing on forts; little did we know! 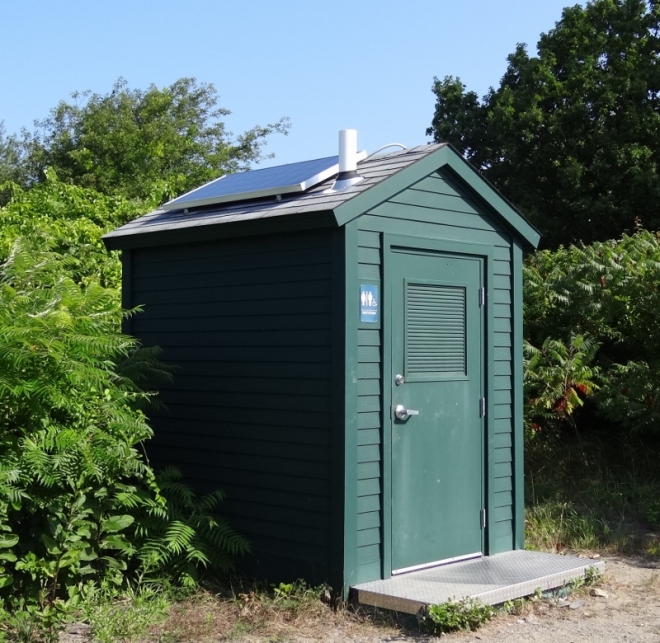 Islands without fancy restrooms had these modern solar outhouses 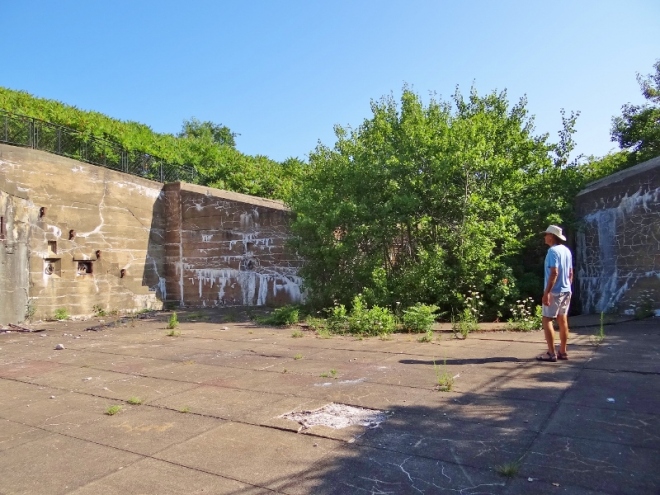 Prisoners held at Fort Warren would try to escape by swimming across The Narrows but the few who could swim well enough to handle the strong current still would eventually be found and brought back.

Looking at Georges and the fort from Fort Standish on Lovells

Lovells was loaded with these. Black raspberries perhaps? Tart- I tried one

Spectacle and its transformation over the years

Spectacle, so named because the early colonists thought it resembled a pair of eyeglasses. Could they see it from the air? I always wonder about this. Spectacle’s history is varied, fascinating and thanks to the “Big Dig” it received a new lease on life and a total makeover- I mean between Mother Nature and 3.7 million cubic yards of excavated earth, the landform you see today bears little resemblance to that which existed in the 1600s. Originally two drumlin hills connected by a tombolo (narrow strip of beach) the island looks like one large one with two higher hills at its north and south ends.

First used by colonists for wood lots, haying and gazing livestock, from 1717-1737 the island was home to a maritime quarantine station that hospitalized mariners, passengers and Boston citizens during health epidemics. When a new quarantine hospital was built on Rainsford Island in 1938, Spectacle began attracting mainlanders for recreation. Two summer-time inns welcomed guests until the late 1850s.

In 1857 Nahum Ward bought the island and built a horse-rendering factory; an early recycling operation you could call it. By 1903 a City of Boston contractor set up a garbage processing facility and over the next 56 years Spectacle was one of the city’s dumping grounds. During this one hundred year time many island workers and their families lived on the islands undisturbed uplands and if the photographs don’t lie then their country-style life looked good.

I am sure you are well aware of the usual meaning of spectacle and that is: Anything presented to the sight or view, especially of a striking or impressive kind. While our little show was not entirely noticeable from shore nor from another boat unless you came close, we certainly chose the right island for our spectacle. For years Russ has dreaded the time when he’d need to go diving; not diving for fun but diving to unwrap a wayward line from a prop. Certain that lobster pot crowded waters would make this dream (hee hee) come true, we headed to Maine.

Imagine what’s been dumped into the waters in and around Boston. An anchor gets snagged on lord knows what (the water is cleaner, but not that clean) and you can’t pull it up. So, you rig a trip line to your anchor. In our case this is a line (not polypropylene) with a very small red fender float. For some reason maybe due to Spectacle’s trashy history Russ decided to use a trip line. At high tide the depth is over 20 feet so we used the full length of line and tied it to the anchor.

I will spare the details but the confluence was that the line got wrapped in the starboard prop. This is where only mild panic sets in because we have another engine-right? Yes. On goes the wetsuit and a knife. Boats make regular wakes but otherwise the calm winds are not a problem as the anchor is down, although we are facing an odd way.

Jumps in between the hulls; yep it’s wrapped. The boat bobs easily, I watch the charplotter to be sure we aren’t going anywhere and Russ says to get him a short blue line. We attach this to the small cleat at the stern so he can use it to pull up on and don’t ask how but somehow this too gets wrapped around the prop!! Thirty minutes and two ideas later, he’s back in with the fishing knife, this time on the outside of the starboard hull, goes down and hands me the knife. Whew. After a few minutes the blue line is loose and then comes the rest of the trip line.  We swing into the wind, and hoping that this counts as our one and only dive, we head for shore.

Groups of city kids enjoy a beach day on Spectacle

Methane vent tubes are a necessity

The layer cake that is Spectacle Island

With so many years of trash, garbage and whatever being dumped on Spectacle they’ve become historical artifacts. Signs asking you to leave anything you find on the island “for others to enjoy” are posted near the ferry docks and Visitor’s Center. We landed on the beach and well, I just didn’t see the signs.