Turnabout is fair play, right? The 1841 whaling ship embarked on 37 voyages, pursuing whales in an era where young boys put to sea and returned (if they were lucky) older and far more life savvy than when they set out to find adventure and a few coins for their pocket.

First a bit of background on the world’s last wooden whaling ship, now about to end her 38th voyage that took her from Mystic, CT to Boston, MA with stops along the way at Newport, RI, Vineyard Haven, New Bedford, MA (where she was built), Provincetown, MA and Mass Maritime Academy at the western end of the Cape Cod Canal. She left New London on June 15 and we’ve dogged her in hot pursuit ever since our July 8th departure. We’d heard that her New Bedford homecoming was so incredible, jubilant and emotional that they didn’t want to let her go.

The reality is that we had no idea we’d be close by in Buzzard’s Bay until a week into our voyage when we read that she’d be sailing (in the broad sense ) back down Buzzards Bay in late July and our rough itinerary put us there right at that time. Weather permitting, we’d be on scene ready to shoot kindly with a camera and not those incredible harpoons her crew wielded, hell-bent on whale blubber.

The Morgan’s days began in New Bedford, a town synonymous with ships, whaling and all manner of commercial fishing. She is America’s oldest surviving commercial vessel and since 1941 has welcomed tens of thousands of Mystic Seaport visitors aboard.

As kids growing up in Connecticut Russ and I both visited the Seaport with our families; the Morgan being a top attraction. In the 1960s she was not floating. 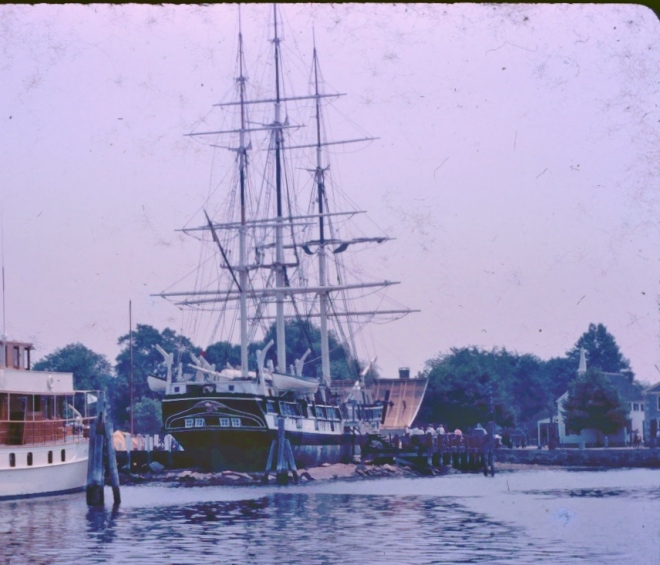 Circa 1964, from Rackliffe family slides- the Morgan at Mystic Seaport

Fast forward to late 1990s/early 2000s when we would visit the Seaport by car and even better, by boat. The Seaport has room for 20-30 boats at two different dock locations within the compound. Many summer weekends boats gather for an arranged rendezvous so you’ve got to plan ahead to reserve space.  Not only is being right there very cool and convenient, but for youngsters the best time is after the Seaport closes and they have the run of the place.

After Quisset sailed 13nm up to Red Brook Harbor and got a close-in mooring at Parker’s Boat Yard. These balls are well-spaced with double pennants, many with a float and pick-up whip. We prefer no whip because they hit the dolphin stays at the bow so you have to be perfect in your approach. I’ve learned to use the boat hook to pull the whip closer and not wait for it to be in that two foot space where the stays meet up with the screecher pole. Between that, our two anchors and the seagull stays, grabbing a mooring ball is always a challenge. This doesn’t include dealing with the whip/float thing and the boat hook which I can’t get out of my way fast enough.

We didn’t do much here, mostly thanks to rain on Sunday and a very windy Monday. The Morgan was due to sail out between Monday and Wednesday and we were thrilled to learn that Tuesday was the day. We now had her in our sights with a fully charged camera.

Our first glimpse of the Charles W Morgan being towed down Hog island Channel from Mass Maritime.

Tuesday kicked off a bit windy but by 10am was only around 10kts out of the SW. Good for all the boats who’d be out in the Bay with the ship but looking iffy for the Morgan to be able to sail. By scanning various VHF channels, we heard that she’d head out at noon slack tide.

An old classic rides along with the majestic whaler

Tug Sirius towed the Morgan (drawing 14ft) down Hog island Channel across the flats (wherever that is) and on to New London. This info came from the tug to Canal Control as she departed. We dropped the mooring lines and followed the snaking channel out past Bassetts Island and into the Bay. Many boats of all makes, shapes and sizes came out to follow along with the old whaler. 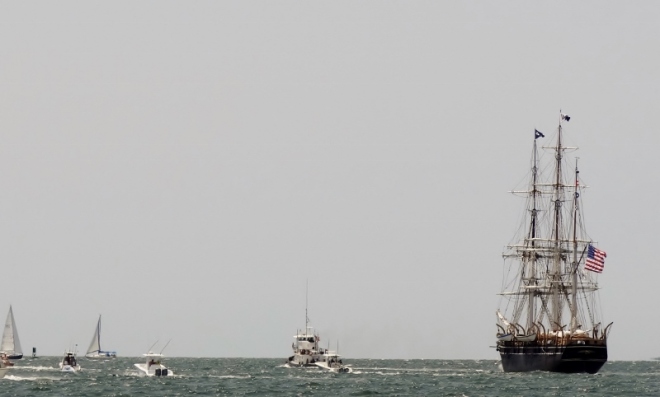 Tug Sirius and her charge continue on without us

I will have to admit that when we learned the Morgan’s five-year restoration plan would include making her able to sail, we had mixed feelings leaning toward the negative.

The restoration nears completion in June 2013. Look carefully, you can see her behind all that scaffolding

When the moment arrived, even though she wasn’t sailing, it was an emotional moment to be part of such a successful and glorious 38th voyage. Apparently she was towed overnight into New London where she will remain for a short time before heading back to her Mystic Seaport home. My understanding is no further sailing plans are in the wind, but don’t be surprised to hear about a 39th or 40th someday. A lucky ship like the Morgan still has a lot of life left in her.

2 thoughts on “Pursuing the Morgan”