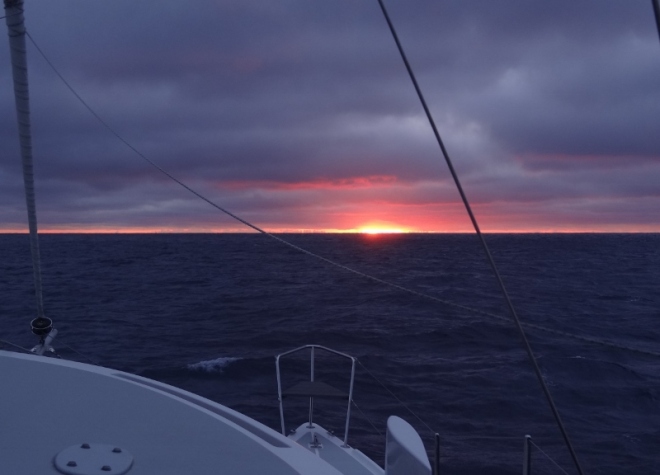 As we turn East away from the Florida coast, the sun peeks out from the Bahamas

A simple crossing would be direct from say, West Palm (Lake Worth inlet) to West End, roughly 60 nautical miles. With a wide open crossing window we wanted to make full use of it to advance as far south as possible in the Bahamas, which meant clearing in at Nassau. How is it we find ourselves there again when we said, “not again” last December??? Sigh.

The various weather prognosticators may stand and take a bow; they nailed it pretty darn well. We knew that leaving out Ft Pierce Sunday 1:30pm, the swells would be generous but diminishing with time and distance overnight and into Monday. The trip out the inlet was the worst; large, steep swells coming in from the NE as we exited, giving our bows a thorough salt water wash.  We’d hug the coast, only out about one mile until ready to cross the GS somewhere between Ft Lauderdale and Miami. Passing by the hi-rise condos along North Palm, Palm Shores and Palm Beach (so many Palms!) at night felt odd to be so close.

By morning the wind had shifted out of the west, we raised the main and motor-sailed for a few hours. A fair amount of big ship traffic south of Ft Lauderdale encouraged us to take a “keep out of their way” path, so we turned east toward the GS approx. 10 miles north of Miami. The west edge of the Stream lies about 4 miles off the FL coast here so it didn’t take long to be in it and start to be pulled north. Set a course 20 degrees off our intended for that classic “S” curve you need to make unless you enter the GS much further south of your destination on the Bahama banks. The main was OK with wind right on our tail but not the jib, and both we and Ms Ortolan were extremely grateful for a following sea (waves at our stern) pushing us along rather than us pounding into them- which we do not do anymore! 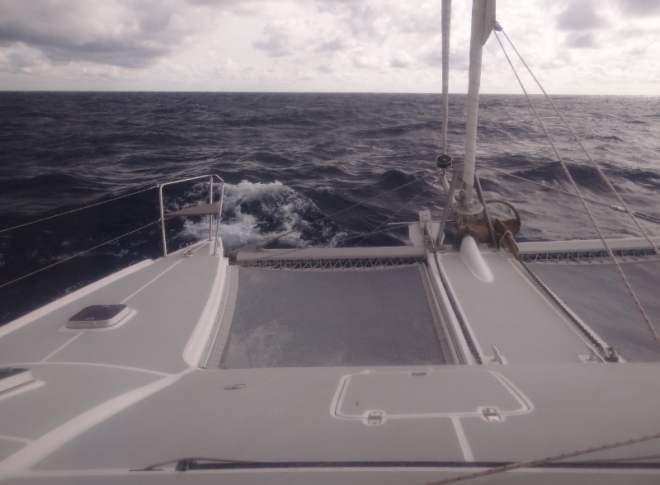 Neither of us felt like eating much but sipping water and staying hydrated is important so we did that. Dinner time Monday, with the wind and waves backed down some we ate a meal of salad, cheese and crackers and focaccia bread. A couple of hours later I was starting to be sorry for even that much, but it didn’t last long.

We heard a few others on VHF but never saw any until later on Monday. We heard s/v Elvis make arrangements to go in to a Bimini marina; he keeps following us. 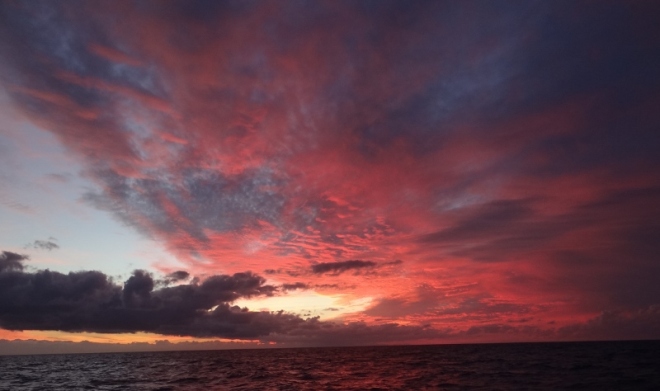 Sunset on the Bahama banks as we head toward Mackie Shoal

Daybreak found us a mile off the northern shore of New Providence (Nassau) running parallel for a good and first time look at this part of it. Compared to the other Bahamian islands we’ve seen, it’s quite large and has that glow at night from all the land and coast lighting. Wind was down to less than 10kts and we dropped the main easily in 1-2ft waves. Two cruise ships were arriving- one at 7am and the other at 7:30; we were ahead of them. Next came the tricky part.

Nassau Harbor is busy and you must check in with Harbor Control before coming in to the western entrance because that’s where all the ship activity happens. Customs & Immigration come to the harbor’s marinas and to your boat for clearing in. The past two times in Nassau- one taking Benj to the airport and last year, picking him up – the marinas balked at giving us a slip that could hold a longer boat, but we needed it because of our width. In Vero another frugal cruiser told us that he’d anchored and dinghied in; walking to the govt bldg. in town to clear in. When our crossing plan solidified to include a likely clearing in at Nassau, we figured we would anchor in the harbor or at a cay nearby and Russ would take the dinghy into town. The backup plan was to stop and clear in at Chubb Cay which we would pass by (sort of) on the way to Nassau, but that process would take several hours and cost $100 even if we didn’t get a slip at the expensive marina.

About a mile out we hailed Harbor Control and then switched to the working channel. Provided the requested info: boat name, Doc # and last port. The last question was, “to which marina are you going?” We both cringed and held our breath when I said we planned to anchor then clear in. No,no,no. You must clear in first and the woman directed us to the concrete dock by the yellow building where we could tie up to clear in, “and then you have to leave.” Yikes. If only she’d told us the dock was on the eastern side of the cruise ship piers then we wouldn’t have been nearly run down by Carnival Sensation. At least we didn’t get a major chewing-out like the sailboat who was headed to that dock just ahead of us. They hadn’t called Harbor Control soon enough and boy she laid into them. But good fortune for us, because we had someone to toss a line to, otherwise it would have been quite the process. 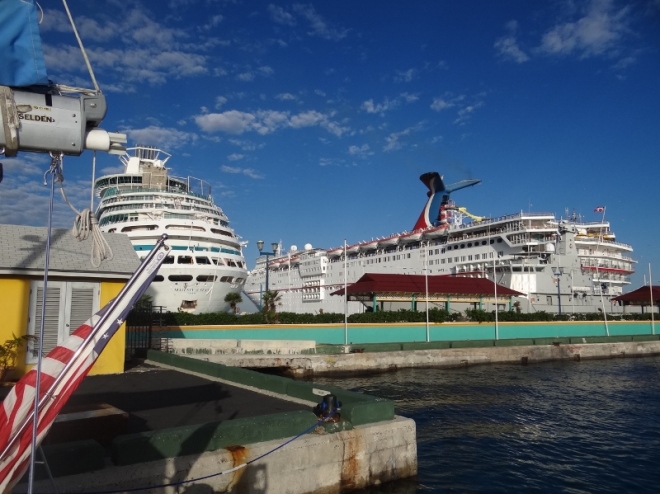 Cruise ships in their berths, Ortolan in hers- all in one piece 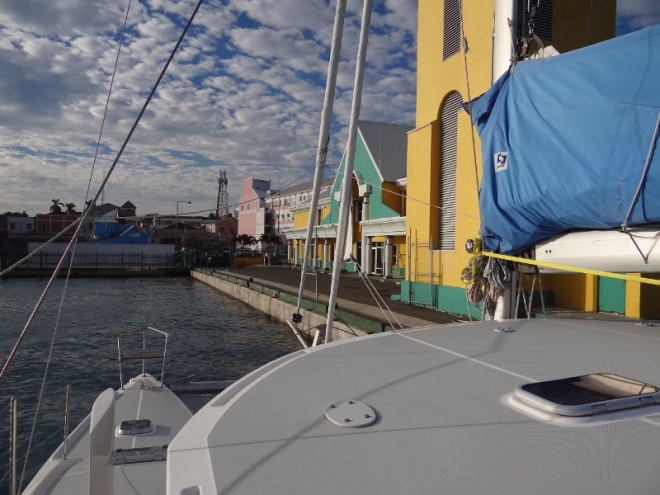 I think the tall yellow bldg. is Harbor Control and the green is Customs & Immigration

By 8:30, cleared in with 120 days Russ had to beg for, we anchored near the eastern entrance to eat breakfast. Our trip was 261 nm, 42 hours with 21 hours pure sailing. After breakfast we moved a couple of miles to anchor off Salt Cay for some much-needed sleep and when we got up at 12:30, the sun was shining brightly, the wind was low and the water was crystal clear.  🙂 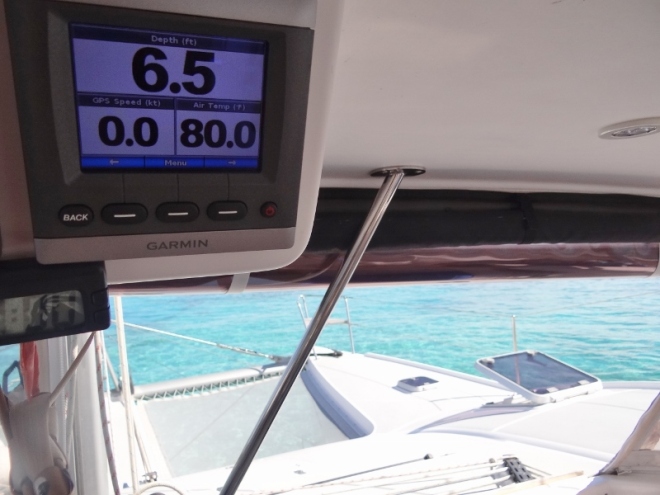 The view out our front window- panel rolled up of course.

One thought on “A Lonnnggg Crossing”