Once you meet a boat and her owners you tend to refer to them by the boat name. Even though s/v Sanuk herself (a Baba 30) spent the long winter in Marathon, FL and may eventually be replaced, Chris and Tracy will always be “Sanuk” to us. First though, a few words about Crisfield, who bills itself the “Crab Capital of the World”.

Originally called Annemessex, a Native American word meaning “bountiful waters”, Crisfield was a fishing village when Benjamin Somers was granted 300 acres in 1663 on what later became Somers Cove. Much like other towns nearby, Crisfield exploded in the mid-1800s when, thanks to John Woodland Crisfield, the railroad arrived. Oyster shipments ramped up and residents prospered. In 1866 the town was renamed Crisfield in honor of the man who was largely responsible for the flourishing economy.

By 1872 Crisfield was one of the biggest seafood producers in the U.S. and would fill 18 boxcars with oysters in a day!  Imagine all those mountains of discarded oyster shells. The town fathers believed in recycling and had the marshes filled with the shells, creating much of today’s waterfront in Crisfield. A town of many seafood festivals and producing at least one Maryland governor, Crisfield is very sleepy in the off-season. Oysters no longer rule, crabs do and they are heavily promoted.  Street and shop signs, the town’s water tower; all illustrate “crab capital.” 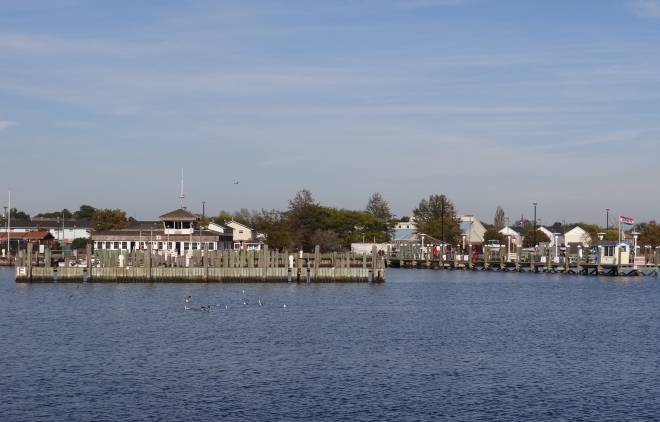 Somers Cove Marina had plenty of room for us.. and many others!

All that being said, we came to see Chris and Tracy who we hadn’t seen since spring 2011 as we both were headed north. This summer was their second as owners of Crisfield Boat Rentals (CBR), offering pontoons, kayaks, paddle boards, skiffs and a HobieCat to eager area visitors. Tour boats take you to Tangier and Smith islands, fishing charter boats bring you to fish and Crisfield Boat Rental fills the gap with providing the up close and personal on-water experience. Somers Cove Marina fills much of the basin, with the Coast Guard, tour boats and CBR occupying the rest. Off-season the marina looks nearly abandoned, too big for the need you start to think. But then in season with all the fests, fishing and fun, the marina fills up and boats anchor in the middle of the basin too.

We dined, drank and met many of our friend’s friends. With a population of less than 2,000, knowing more than your immediate neighbor is easy. Plus, own a business and you get to know a ton of people.

One of the only (sit-down) restaurants open year-round is Waterman’s. Co-owner Brian, a “when he has time” sailor, stopped by to chat. He’s familiar with our home waters; a fact that should stop surprising us. Many people we meet have a connection to, have visited or cruised the waters of eastern LIS and the CT to MA shoreline- including all those well-known destination islands.

The weather placed a layer of gloominess over our short visit, but Chris and Tracy know how to have a good time and that we did. Our pontoon harbor tour was our first time in a flat, boxy multihull with more pep than you’d think. Very comfy with plenty of drink holders, room to lounge, oodles of storage and you can have a sun cover and a porta-potty to help extend your cruising range. When we eventually settle somewhere and become CLODs (cruisers living on dirt) a pontoon boat will be high on my list.  We see them everywhere along the ICW, filled with smiling faces who always wave. 🙂