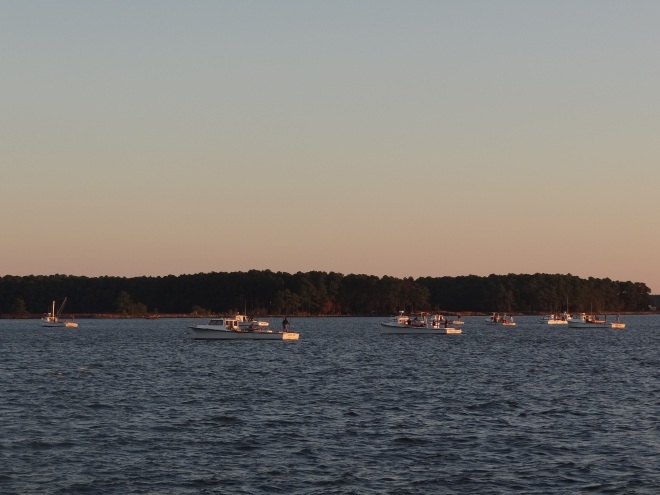 Early risers gather before going out for today’s catch

Wanting better protection for the night and positioning for heading south down the Bay in NW winds, we left Oxford bound for Balls Creek off Broad Creek (one of many Broad Creeks around). During the night the wind would shift from S to NW, picking up to 20kts with higher gusts.

We had a new (secondary) anchor watch app for the iPhone5 called Anchor! and thought this was a good opportunity to try it out. Ideally you mark where you drop your anchor (as in be out with the app going at the bow and touch the anchor symbol) then create a comfort zone circle around yourself. The app will notify you with an email, sound an alarm and your phone will flash if you move outside your safety circle. If you are off the boat and get the email, you can use the “Find My Phone” feature to see on the map just where the boat has moved to. Another app we tested out had the option for the on-board phone to call your other phone so you’d know asap if you might be dragging. We contacted the creator of Anchor! to suggest he add the calling option to his app (we liked Anchor! better than the other) and heard back quickly that he would if he could make it work with his application.

The good news is that we didn’t drag, the bad news was I got the worst night’s sleep of the trip. The wind was noisy and so was the base of the mast and some furl line squeaked on and off all night. Ugh.

As we left our creek for Broad Creek which would lead to the Choptank and on in to the Bay, so many oystermen were gathered- twice as many as I could photograph- ready to begin their day which for us was starting earlier than usual. My Salada tea tag read, “Wind is air in a hurry.” How apropos for today. The wind was still honkin’ for the first few hours but after 10am we shook out the reef and let the jib out full. The wind continued to diminish and soon we were motor-sailing, then the last couple hours were a pure motor.

Heard s/v Harmony II calling another vessel; closing in on them!  This cool dude was heading north along the western shore. Our friends at Wikipedia say she’s M80 Stiletto, a prototype naval ship with a pentamaran hull design. Launched in 2006 she appears to be an “only.” A healthy cruising speed of 40kts with a top speed of 50kts, she was crawling at 30kts when we saw her (AIS).  Carbon fiber construction with a 2 1/2 ft draft for her large 90’x40’ body; she could visit the Bahamas easily with such a shallow draft. 🙂

Further down the bay several miles north of our turn east through Kedges Strait a Navy vessel hailed a southbound catamaran- but it wasn’t us. Hadn’t seen many sailing vessels today, so was curious to see another cat probably headed for Crisfield too.  We subsequently spoke to Navy Moose and learned that target practice was occurring just south of our turn east and we just needed to keep a healthy two miles away. So that explains the AIS vessel near the dotted “bombing” circle on the chart.

We arrived at Somers Cove Marina in Crisfield at 4pm, a 62nm, eight and ½ hour-day. Wind more hurried today than usual. A great sail while it lasted.