Weather systems collide in North Carolina. Why? Five of six times passing thru the 50nm circle with Oriental at its center, whether south or north bound, we’ve need to hunker down for weather. South bound the wind is king, and last fall Queen Sandy visited. North bound not only do we travel cautiously and hide from 20kts, or more, but tornadoes and/or heavy rain and T-storms keep greeting us here. Thursday found us enjoying another good motor-sail from Wrightsville Beach (Masonboro Inlet) to Beaufort (that’s bow, not bew). Very boring; no dolphins, no other vessels, no feathered visitors. 69nm took almost 11 hours.  Dropped the hook; well it’s more than a hook- more like a lead weight, off the CG station at Ft Macon, our usual spot when we come in or stage to go out at Beaufort.

Friday was quite the day as the forecast held true at: S 15-25kts, gusting 30 (and more). Any boat sailing north offshore that day must have enjoyed a great sail, but I would not have wanted to be out there at all. Been there, done that, no thank-you. Rain too, ahead of the huge front that stretched north almost to CN to as far south as Florida, maybe further. Even with a delayed departure thanks to rain we arrived at Slade Creek (awful name uh?) by 4:15, averaging 7kts for the trip. In calm conditions, running one engine at 2500 rpms will move us along at 5 ½ kts; adding the second provides a one knot boost. The Neuse River stretch felt like being offshore, with 3-4ft seas at our stern.  Pounding into North at even 10-15kts would have been very rough- ugh. One engine and the jib (reefed yet) saw us flying along close to 8kts. Those less hardy put in early at Oriental or River Dunes while we continued up, crossing the Pamlico to the Pungo River then hanging a right up into the protection of Slade Creek.

The problem with many creeks this time of year (compared to fall) is the pot floats that can be anywhere from a few to zillions. Reading reviews of each anchorage gives you some idea, but you don’t know til you get there. Slade was a new stop for us; reviews indicating pots would not be a problem. The trip up the creek was easy and we went in far enough to get protection from all directions, cuz as you know with a front, the wind clocks around.  A row of pots lined each shore and it served to mark the edge of the deeper water where you wanted to be anyway. Saw 8-9ft, true to the chart and with no tide range just one less worry. Further up where we wanted to anchor the pots only lined one shore and we never got even close to them.

Another creek in the middle of the boonies of NC. Up a creek without a paddle is one thing, up a creek with no cell service is another thing entirely!  The iPhone 5 was able to grab the occasional email, but my iPhone 3 was useless so we just set it to airplane mode.  The CG had earlier announced the Alligator River Swing Bridge was closed due to wind; no surprise and this is going to be a problem, maybe not Saturday, but after that for sure.

It’s midnite and I’m not famous- I mean asleep yet. We are snug and secure here in 7 ½ ft, no fetch to speak of and no other boats around to drag into us. Ms Rocna grabbed well and we, as usual, have out 7 to 1 scope.  The leading edge of the front is nearly solid dark red with some purple centers, indicating heavy rain and likely T-storm activity. Oh, my favorite. The worst of it passed overhead between 12:30 and 1am, with a tremendous pouring down of rain like we rarely see- purple rain according to Russ. Now you know the origin of Prince’s song. 🙂

Lightning and minimal thunder, mostly none too close and the rain lessened afterward. We’d just dozed off when the chartplotter beeped- finally the marine warning popped up!  Turned that off, but an hour later when the wind shifted to NW, the drag alarm sounded. Arhhhhhh- no, we hadn’t dragged, just were 150 ft from our original spot. We really dislike the way it works. Electronics are always turned off at night, except in conditions like this. Knock on wood though, we have not dragged, even a bit, since Cocoa Beach last November. Shame on us, we knew the anchor hadn’t set well enough there. When Ms Rocna sets well, we don’t move. I rest easier than I used to. With more than 500 anchorings so far, we’ve developed good technique, added a shock absorbing snubber and know our anchor likes her mud.  Russ spends a good 5 minutes washing down the anchor chain as we bring it up but that’s using river water, not our fresh supply, so we’re happy to do it knowing the anchor was well set.

Saturday, somewhat surprisingly, but true to forecast, the winds were low out of the north never more than 10kts. We decided to move 14 miles north to a spot in the Pungo River where it shrinks to creek-like proportions and veers away from the ICW, but very close to it.  Our bow dipped down bringing up the anchor, a sure sign of a well dug in piece of galvanized steel. I could have made lunch in the time Russ spent rinsing the anchor chain, but we’d slept in until 10 and didn’t head out until almost 1pm for the two-hour trip.

Along the way, cell bars jumped to 3 but by the time we anchored, one or less was going to be our fate again. Standing out at the stern or on the roof does improve the service asserts the Captain. Later on, s/v Java joined us but other than them, we saw just a few boats heading north, mostly motor yachts and small trawlers. The great thing about this spot was the complete lack of pot floats. Last May another boat found so many here that they could not anchor. Guess the crabbers decided to let the poor things re-populate this year. 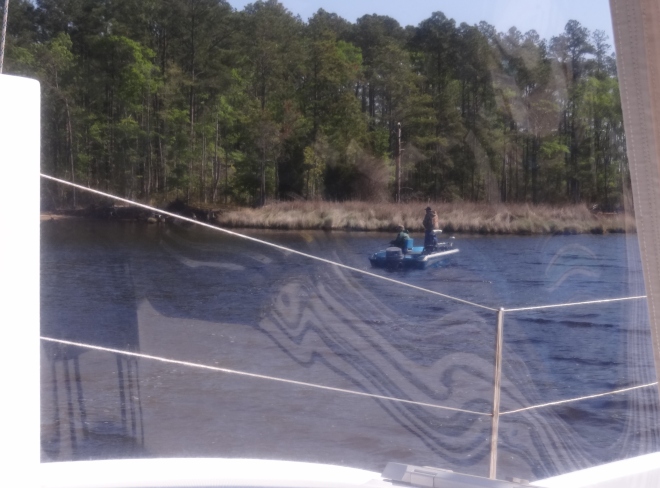 Sunday dawned sunny and chilly at 50 brisk degrees. Guess who was gone by 7am? Not us. Java. Um, the forecast promised 15-25kts, with gusts to 35, same for Monday and part of Tuesday.  We’re anchored ½ mile away from the southern end of the 20-mile long Alligator River-Pungo River canal. The canal is easy to do in most any weather, but when you get to the wide Alligator River, then what?  Ten more miles gets you to the swing bridge that closes in wind greater than 34kts. We figured no point in continuing until the wind backed down and the bridge would open.

The view from my galley window.

8:30, with wind less than 10kts  the swing bridge closed, much to the surprise and consternation of many boats. Is it possible that they are getting 24kts more than we?  Yikes. Yep, fat, dumb and happy. “What, closed all day?” A couple of motor yachts, no doubt with a schedule to keep, took on more fuel at a Belhaven marina then headed south down the Pamlico River, into Pamlico Sound to go down and around, through Albemarle Sound, ending up at Coinjock. 116 miles we heard one guy tell another. Got one rough ride ahead of them. S/v Java returned to the nest at 11am; they made it half way. Said they were surprised we didn’t leave; we were more surprised that they did. 🙂  Was nice to have another boat around and we checked on each other a few times each day.

As predicted, I’m here in a creek catching up on the blog (going to be quite a few posts once we get some 4G bars), with a teeny bit of cell service, a clear view of boats in the ICW and the occasional local guys fishing near the marsh shores. Sunshine keeping us warm during the day. Bit chilly at night- 48 degrees- hey it’s like being home!