Cape Cod National Seashore. Cumberland Island National Seashore. If you’re lucky enough to have visited one, let alone both, you are lucky indeed. Dungeness is not one, but two magnificent estates, each separated by 100 years and sharing the same name. Just to keep things interesting.

First off a brief (Oh, when am I ever brief?) history and for those craving more, you can Google “Dungeness” or “Cumberland Island.” The Timucuan Indians, same ones Ponce de Leon came upon in Florida, were Cumberland Islands’ earliest inhabitants.  For over 3000 years they thrived on the bounty of the land, sea and shore. The 1500s brought the first Europeans to Cumberland Island, namely the Spanish, who, true to form, established a mission.

In 1736, the English, led by General Oglethorpe, took possession and constructed two small forts at each end of the island.  Due to the island’s location between England’s and Spain’s territories, not much happened in the way of homesteading or cultivating even after land grants became available in 1760’s.

After the Revolutionary War, General Nathanael Greene acquired property on the island which he primarily used for harvesting live oak for use by the U.S. Navy. He died and his wife Catherine remarried. She and new hubby, Phineas Miller, built a four-story tabby mansion (Tabby is a type of concrete made by burning oyster shells to create lime, then mixing it with a slurry of water, local sand and broken oyster shells. Its origin is uncertain. It is likely that Sixteenth-century Spanish explorers first brought tabby (which appears as “tabee”, “tapis”, “tappy” and “tapia” in early documents) to the coasts of what would become South Carolina and Georgia. Tapia is Spanish for “mud wall”, and, in fact, the mortar used to caulk the earliest cabins in this area was a mixture of mud and Spanish Moss.) (thanks Wikipedia) and named it Dungeness. Upon Catherine’s death in 1814, her daughter Louisa Green Shaw became mistress and promoter of prosperity at Dungeness.

Hundreds of slaves worked the plantations and Sea Island cotton became an important source of income for Dungeness as well as other Cumberland plantations.  Louisa’s efforts saw that other crops such as olives, oranges, figs and pomegranates were grown at Dungeness.

The below house is all that remains of this first Dungeness estate. It is believed to be the oldest structure on the island.  When the Carnegies built their Dungeness, all the original buildings were torn down except this one which was remodeled and used as a business office.

The Dungeness ruins one can see today are those that remain from the Newport mansion-esque estate of Thomas and Lucy Carnegie. Thomas was the younger brother of financier Andrew Carnegie. For some reason he and Lucy visited Cumberland Island and at Lucy’s insistence, soon purchased 4,000 acres in 1882.  The estate would be a fabulous playground for the couple’s nine children as well as friends and family in the elite circle of the Guilded Age.  Thomas died in 1886 (age 44) and Lucy oversaw the creation of a Carnegie Dungeness, complete with the eventual acquisition of 90 percent of the island and the construction of four additional mansions for their children.

This place had it all: recreation building with indoor pool, billiard room, squash court, beauty parlor and sunlit guest rooms; greenhouse; carriage house; servants’ quarters; machine and carpentry shops; commissary and a smoke house. Gardens were designed, planted and tended while crops were grown and harvested. Lucy wanted Dungeness to be self-sufficient and it was. But all things reach the end of their usefulness and the 1920’s saw a decline in the use of Dungeness. Imagine the cost, even then, to maintain such a large remote estate.  Long unoccupied, except for the infrequent visit, Mother Nature had begun to encroach on the buildings and they were in sad shape. In 1959 Dungeness burned.

The story of how Dungeness and all of Cumberland Island came to be protected and preserved by the National Park Service is best left for those who really need to know. Suffice to say that the circuitous route happily led to the treasure we can all enjoy today. Greyfield, one of the four offspring mansions, still stands today and serves both as an inn and a meeting/gathering place for the 12 remaining families on the island. Plum Orchard, further north, also survived and is a museum with odd hours. We stopped there fall 2011 but the mansion was not open that day.

Approximately 120 wild horses roam the island; this count is down from the last time. The horses are descendents of those brought over by the Carnegies and seem to be relatively unperturbed by curious visitors. 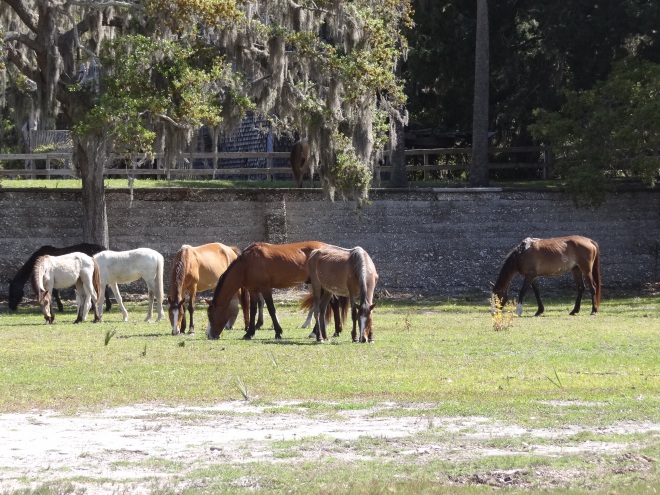 The only horses we saw were near the mansion

We anchored off the Sea Camp Dock, second row of boats in toward the “visible at low tide” mud flats. Monday was a gift- the weather was perfect and we got going early so as to see and do as much as possible. Seems we weren’t going early enough, because we missed a submarine leaving from Kings Bay sub base just a couple of miles away.

First stop was the station at the Sea Camp landing to obtain a River Trail guide map and a Dungeness Ruins trail map. The River Trail is an easy mile walk from the Sea Camp dock down to the Dungeness dock. Ten markers identify plants and trees that provided many of life’s basic necessities to the Timucuans.

River trail and horse evidence- which we saw everywhere- all day. Caution advised!

The trail brings you to the Ice House. You can guess its original use. Today it houses Dungeness artifacts and photographs along with views into a rich and varied island history.

Thomas and Lucy Carnegie with Dungeness photographs and tablesetting

The entrance gate is impressive and we listened in while a tour guide told that the iron work was designed by Tiffany, who also came on-site to oversee its installation. 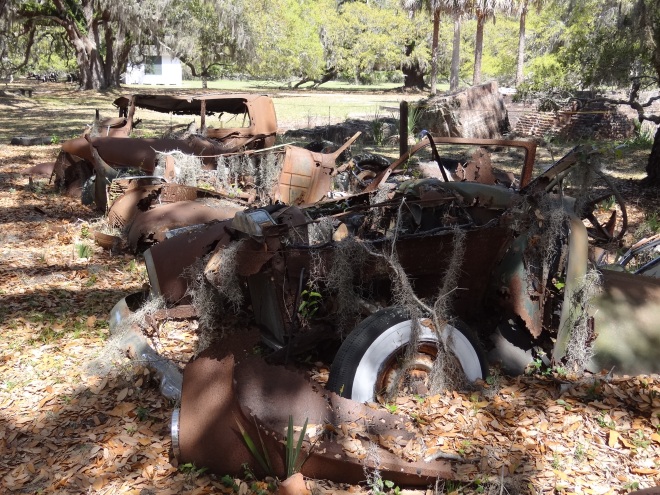 How can these be so rusted and still have shiny white walls?

When we got back to the dinghy dock a surprise was waiting; that darn tide, all six feet of it, had gone down and the outboard was in the mud. 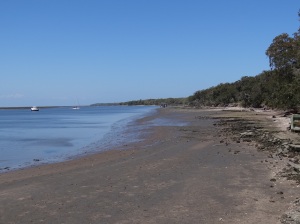 However, we really felt like idiots when we saw Ortolan stern-to the mud shoal; the wind had shifted and we’d swung toward it rather than parallel.  Depth was 12’ when we’d anchored on Sunday at mid-tide. And we were fine- hey two other cats had anchored in line ahead of us, but guess who had more scope out? Pulled in much of the chain and since no wind was forecast we decided to be lazy and stay put. Still had a few things to do ashore and re-anchoring would cut into that time.

Way too close; the rudders are nudged into the mud

The beachcomber is happy! 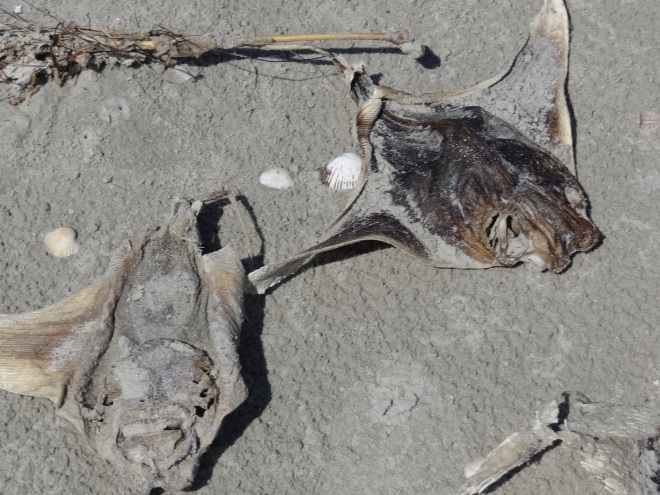 Many, many dead eagle rays recently washed up: cause TBD. Not so happy.

At the end of the day a video was shown about the history of Dungeness and Cumberland Island’s journey to designated a National Seashore.  Glad we finally got here and hope we can return again. I took so many pictures that at some point I’ll create a photo album for Cumberland Island.