We love a calm sail, anywhere in the 60 – 120 degree zone is fine and boy we sure nailed one for the 7 hour trip to Thompson Bay, Long Island. We exited Elizabeth Harbor via the south “cut” which is wide enough to be relatively benign and noticed several boats ahead of us and a blue-hulled Nordic Tug behind- yep was Northstar headed for Conception Island. So far this was a one engine motor trip, but when the wind got up to 7kts we raised the main, unfurled the jib and before long were enjoying the ideal sail.  About this same time we crossed the Tropic of Cancer and officially entered the Tropics! No wonder the temp gauge reached 85!   For a while we slid along at 5kts in water calm enough to easily see bottom in 12-15ft.

We notice sails behind us which turn into being a catamaran which turns out to be Déjà Vu. 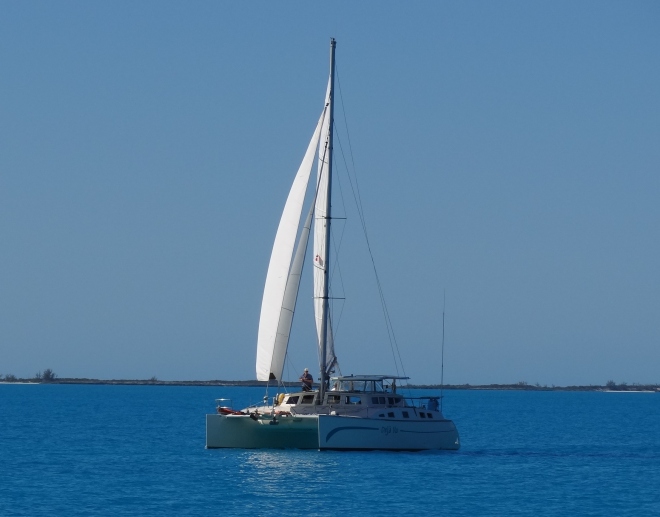 Before I realized who it was, the camera was out and I was poised to hail the boat. Why?  For that elusive photo of us under sail and what a great opportunity; a beautiful, calm, sunny day in the tropics!  Now that we KNEW the boat I was all smiles as I hailed them; Helen answered and said we’d inspired them to get that minor engine repair done and head to Long Island.

We are probably doing about 3kts now.

We took pictures of each other and of course by the time they caught up, the wind died down and soon after we resorted to motor-sailing.

By 3pm we’d dropped the Rocna in Thompson Bay which is a large anchorage on Long Island’s western shore about mid-island and the place where most boats spend at least a few days. Russ enjoyed a kayak tour of the north section where we’d joined 6 other boats, mostly cats. Saturday we’d join Déjà Vu and Yvonne of Options III for a walk to the beach and some serious beach combing.

Long Island’s northernmost point is Cape Santa Maria, named for Christopher Columbus’ ship. The island is roughly 80 miles long and no wider than 4 miles. “The most beautiful island in the world”, according to Chris’s log book- but then again this was only his third New World stop. It is perhaps one of the most dramatic islands of The Bahamas in natural beauty, with bold headlands, towering cliffs along with rolling hills- not to mention miles and miles of beaches. The prettiest sit on the west (banks) side. Those with the most to offer a beach comber sit on the east (ocean side) where the wind and waves move “you name it” on to shore in a never-ending refill of treasures. With a large population of 3,500 the island was/is fairly prosperous. The settlements are spread out, many with long stretches of “not much” in between.