The extended forecast looked great for several days (even more- but you’d be crazy to believe it) and we had time to kill before we dared ask for the OK to be south of Cape Hatteras. 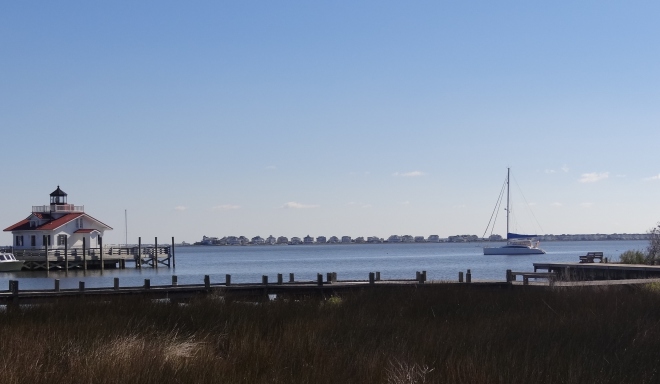 Manteo is a delightful town. Manteo Waterfront  Marina is small but transients don’t seem to have trouble obtaining a berth. The pier just before the marina is a free dock with a gazebo at the end; so as long as you don’t mind (or maybe you welcome) curious folk, for $10 you can use all the water you want. The pump out station is there too, but no one used it during our stay. A couple, a bit older than us, walked by and wondered about our draft- 3ft I told them, which paled in comparison to their pontoon boat’s 9 inches.  As they walked away I heard the wife say to her husband, “See? If we sold our house and bought a boat like that we wouldn’t have any work.” Ha! At least she was right about having to sell the house to buy the boat!

Umm, let’s see, a free dock, calm conditions and a boat still covered with salt thanks to our fun trip in LIS- we’ll take it! Groceries topped the to-do list and that’s an easy 3 block walk to a Food-A –Rama. A Post Office, Family Dollar, pharmacy and others are in the same plaza. We moved the boat from the anchorage after checking in with Carl Jordan, the harbor master. Paid $10 for dock water and $10 to use the Comfort Station (a washer, two dryers, men’s and ladies shower areas, ironing board and book exchange table). By the time we returned to the anchorage later on Tues, everything that required cleaning or washing was back to normal. 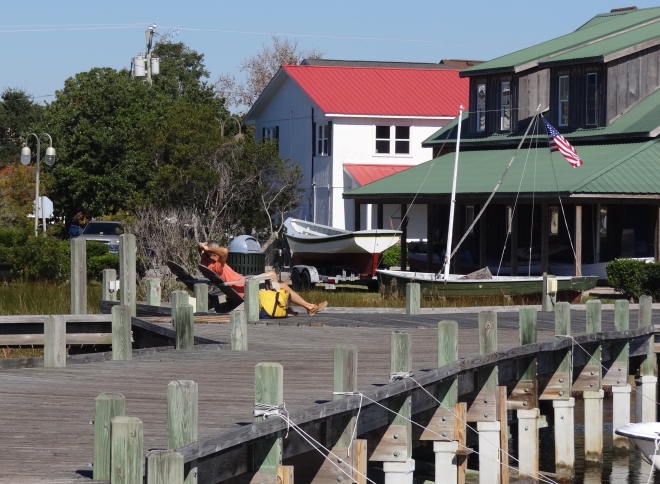 Russ relaxes during the photo shoot.

Manteo, along with the rest of the outer banks, had been hit hard by nasty Irene last August. Last October we noted that stores were mostly closed and we couldn’t tell if they were coming back or not. Happy to say that the town is bustling again and business is booming. Finally made it to Full Moon Café and Brewery where you can enjoy beer flights (brew many of their own) and a delicious and varied menu to be enjoyed outside or in. Manteo is sorta dry- only beer and wine sold. Check this out- my photo of the cafe was used as a “reference” for this painting…. click here. 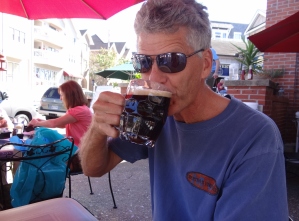 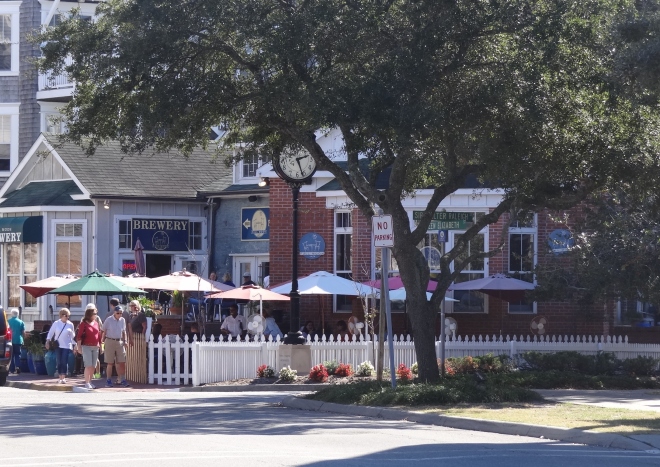 A shop just down the side street from Full Moon is where we first saw and learned about sea beans two years ago. This time I picked up a few very small sea stars from a bin outside. Old bottles –but not any good colors were nearby- I am looking for cobalt blue, cranberry or purple. After I’d paid for the sea stars, I spied a blue milk crate- containing the desired cobalt blue bottles. In fact once I got them home and cleaned up- I saw they were old Bromo Seltzer bottles, 4” tall and 1 ¼” diam. No tops. A whole pile of them were found locally in the woods and the man who found them asked his friend, the shop’s owner, to sell them for him. I bought three- two for me and one for a collector.

Roanoke Festival Park beckoned. Although we’d walked the trail on its outer edge along the water and watched the 16th century repro ship Elizabeth II, we had yet to visit the museum. An interactive site that chronicles and celebrates the first English settlement in America; it was the perfect size to experience without being tiring. As promised, we traveled back to 1585 and were home for dinner. 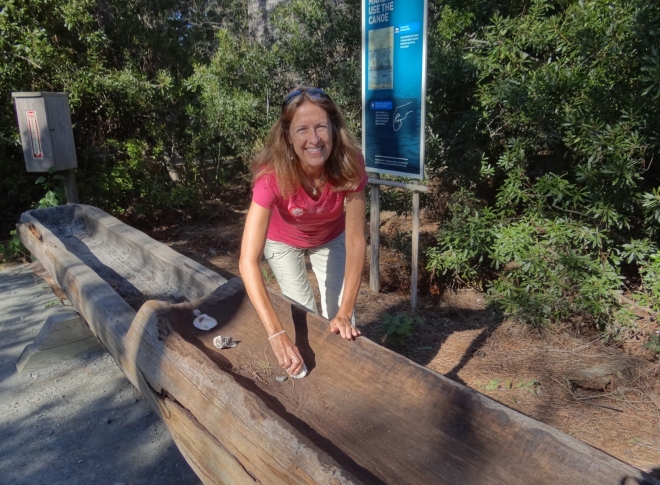 Many more helpers would be needed to make this dugout 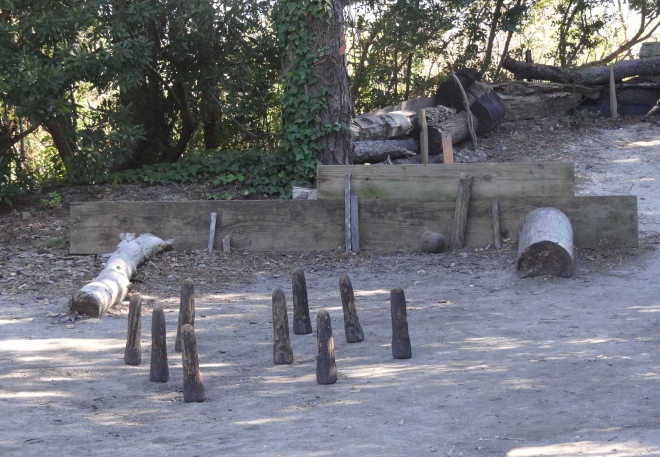 So far, since leaving CT, the level of adrenaline-raising excitement had been about zero – and we are quite comfortable with that. Then came time to get ourselves off the dock with the wind blowing us on at a manageable 7kts. Our stern was four feet away from the gazebo which due to its shape, was wider than the dock by several feet. We’d have to pivot at the bow, reversing to get our stern out away from the gazebo.  Fenders and lines tied to accomplish this, instructions given by the captain and all looked set. Reverse on the starboard engine, began to pivot- the bow rail not in danger of hitting the piling, I am manning the bow line attached to the bow cleat and looped around a piling. As we pivot to 45° Russ gives thumbs up to remove the bow line.  I take one end off the cleat and quickly pull the line from around the piling- oh this so painful- space between the piling and the dock becomes a natural jam cleat  and the line becomes tightly wedged about 18” from the end. I frantically give the STOP signal as seconds later the boat bounces back with the force of the pull. A bit of forward and I am able to release the line from the cleat, toss to toward the dock and holler over that we’ll be back for it.

After we anchored, Russ took the kayak over to retrieve the line which had been placed on the dock. We have four very long black lines which came with the boat. Last year we bought two 25’ blue lines (at my request) and they are jinxed. One, we think, fell off of the tramps (was replaced) and we nearly lost this one. Seems to have a thin strip of wood burnished into the last 18” of the line. Too bad Tropical Storm Sandy looks to give us bigger concerns.