I’ve detected the Captain has a goal of not fueling up at all in the Bahamas; and we just might achieve that goal. Including the roughly 13 gals consumed by the generator, we’ve only used 36 gals of diesel since leaving Nassau Jan 5. A real boon to the   budget. Conditions throughout The Bahamas, especially when headed north, are so often favorable to sail that we’re going to be in for a shocker when we arrive back in Vero Beach for the trek north. We’ll be back to mostly motoring unless we jump out for a coastal sail.

Thursday was spent bobbing along with all our sails up at one point just to keep moving faster than a conch.  I was so antsy about our slow speed that I could almost see Russ calculating the weight reduction if he tossed me overboard!  Fortunately, I don’t weigh enough to matter! 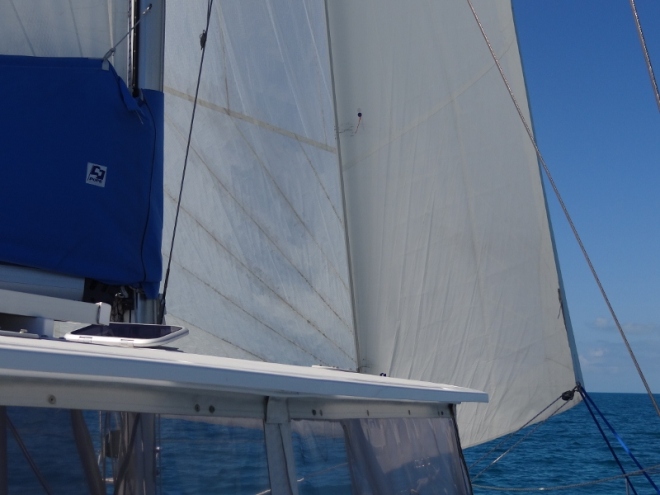 Three's a charm: main,screacher and jib

A drink for the Bar Jack

The wind gods and goddesses blessed us Friday with the longest, most comfortable day of sailing this entire season and King Neptune even offered up a couple of his denizens…- yay! we caught our first fish- a near miss second (tore the lure and bent the bungee cord hook) and a barracuda third, who we let go. After the obligatory photos, a drink (for the fish,- hey it was a BAR Jack), Russ prepped the Bahamas Runner, aka Bar Jack for dining- all 13 ounces of him! So the filets were tiny, but they tasted so sweet and delicious, I was amazed. Kudos to the Captain who left not a single bone in those tiny filets.

One thought on “Catch of the Day ..on to Abaco”