Cambridge Cay is the southern-most cay in the ECLSP and with 14 mooring balls to boot. We sailed (you figured that already, right?) the four nm and had the entire place to ourselves. The Park Warden boat came by shortly after we arrived- hey did they have eyes on us?… to let us know that the self pay box was on small and sandy Mailbox Cay.

We pulled out the area drawing obtained at the park HQ in January so we’d know the good spots. The Cairn Garden is located west of the cairn. Was easy to find and we spotted our first Lionfish and many colorful small fish we hadn’t seen before.

The path across to the Sound side and Bell Rock was well marked in the typical manner- conch lined path. Closer to the Cairn Gardens sits Mailbox Cay where we filled out the envelope and deposited our $20 fee. A fair price for the sole use of this beautiful area. 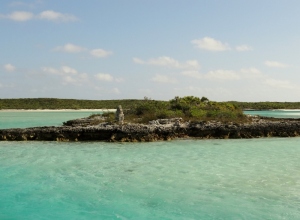 Path across to Bell Rock

Across from Cambridge Cay, to the west, lies privately owned Bell Island. Not sure what the owner is up to, but he’s making an awful mess on the island and it looks nasty- and that’s just our view from the water!

Wednesday we moved up our plans to head to the Abacos. The 8am VHF WX broadcast told of 25-30kts winds following the next cold front that was moving into the central Bahamas mid-Sunday. We’d have to wait several days after that to get the right winds (and calm seas too) to sail to Royal Island at the northern tip of Eleuthera and up to Abaco. Waiting with a full fridge and freezer is no problem mon, but we did not have that luxury.

What we could do was to keep on the move every day and on Saturday arrive in the Abacos and be in Marsh Harbor for a shopping spree on Sunday. On the 9am Exuma Park announcements show we requested a mooring in Warderick Wells and were soon sailing along- very briskly today toward one of our favorite places in Exuma.

Two hours and 14 nm later we tied up to #7 and after lunch took our Ortolan plaque to Boo Boo Hill to join the hundreds of others; some very clever, painted and well designed, others more natural.

But will we find it next year?

As I’ve mentioned before, half of Canada is enjoying the Bahama winter and while we have nothing at all against Canadian cruisers (you know we are friends with several), we are just a tad pleased to see not only a U.S. vessel, but if its local, say CT, NY or RI, we seriously think a meet and greet is in order.  M/V Freedom slid past us to take mooring #9- oh Block Island on their stern and the dinghy had CT #s. Russ went over to help them pick up the mooring pennant after a failed first attempt; the boat’s bow looks too high for an easy pickup.

Exit Strategy, a Lagoon cat stopped by to chat- they saw Essex, CT and being from Milford, CT, well they had to stop. See, other cruisers think “local” too. An email from Indigo said they’d be headed to Warderick Wells, just a day behind us. Bummer. If not for the approaching cold front (the worst looking one since we’d arrived in Bahamas) we could have connected on this trip. Perhaps in the Abacos or on the return trip north; we to CT they to MA.