Sailing the Exuma Banks is easy, so far at any rate. Courses are marked and depths are often over 12 ft and with a 3ft draft we don’t have much trouble even in the more shallow spots. ENE Winds have behaved, allowing us smooth sailing. You know what that means— save on fuel! With everything costing more here, we have to save somewhere. There’s that catch your own fish thing… once we have the right equipment.  In Nassau we picked up a fish I.D. book, but I wish it included the fish we see snorkeling too.

Shroud Cay is within the confines of the Exumas Cays Land and Sea Park, a 176 square mile area set aside in 1959 for the purposes protecting the natural aspect, features and animal, plant and marine life. Approximately 8 miles wide and 22 miles long the park encompasses many cays and beautiful waters, beaches, snorkeling spots, mangrove creeks, hiking trails and a chance- as if you need one- to chill  out and simply revel in the beauty of mother Exuma nature! Moorings are available in several areas, including Shroud Cay but the winds were light and not due to change direction so we opted to anchor in what turned out to be A+ soft, good holding sand.

Of the 3 or 4 explore-able creeks winding through Shroud Cay, that gets its name from its resemblance to the long narrow sheet used to wrap a body, only the most northern one may be explored via a motorized vessel, aka dinghy with outboard. We had poor timing trying to navigate through at low tide, but a rain shower held us back earlier only to send another our way as we approached the creek entrance. More than once Russ got out to pull us through 6” of water. The creek led to a beach on the eastern (Exuma Sound) shore and Camp Driftwood.  The story is this: in the 1960’s a man named Ernest Scholtes began building Camp Driftwood. He was a bit of hermit, living on his sailboat just inside the creek near the Sound. He cut steps into the 50’ hill and carried sand in sail bags to build the trail up. He used driftwood to build tables and benches adding shells and other beach treasures to the “camp”. Others began leaving behind shells and other flotsam and at one time there was a jar with paper and pencils in it for people to leave notes behind. 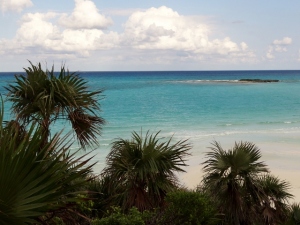 Unfortunately, we were all set to bring our token except the story went on to say that thoughtless individuals left behind bags of garbage and ruined the magic. The park requests that nothing be left at the camp and they will remove anything that is- party poopers.

One thought on “Shroud Cay Jan 8”