I feel as though the 100th post should be fascinating, delightful and possibly worthy of Word Press’s “Freshly Pressed” status. However, that is too much pressure and honestly right now, nothing terribly noteworthy is going on along the way. So, since we’re talking numbers today and for those who know me as a “numbers person”, how about I share a few stats about our cruising life so far.

Number of days we’ve been cruising (this counts the summer when we hardly moved): 388 days

Average length of a typical day on the move: 7.8 hrs- this doesn’t include overnights

Longest travel day: 11 hrs- had a few of these- doesn’t include overnights

Most hours sailing in one trip: on Oct 31 we sailed 8 hrs of our 9 ½ hr day. The only time we sailed more was on a 38 hour overnight when we sailed 8 ¼ hrs- hardly counts

Scariest day/event: Year 1:dragging anchor into mangroves 5am Dec 26, 2010 and then working to pull the boat off with our 8hp outboard- the wind still 15+kts,only able to use one engine to steer into the wind as Russ pulled Ortolan away.  Year 2: so far- on Oct 31 approaching
Wrightsville Beach inlet we plowed against the current through 6ft rollers at the outer end of the breakwaters,wind 20kts. I had a death grip on the wheel as Russ was dealing with the main traveler at the stern. What is it about holidays?

Funniest event: when I fell overboard while anchored at Fort Jeff, Dry Tortugas.
Note to self- do not dip feet in water facing the wrong way and bring one leg over the side- you will flip right in. I held on though.

Best event:  Spring 2011 outside trip to Beaufort, NC when we had a large pod of dolphins having a grand time around us
for at least 15 mins- wish I had the new camera then.

Gee that was dumb: the time we hit a sandbar in Daytona Beach area, trying to get to an anchorage just off the ICW. ActiveCaptain reviews had provided good directions but we didn’t quite follow them.  The nice bridge tender gave us explicit directions in.

Days angry with each other: zero (minutes, yes)

Number of times caught in bad weather: define “bad”- a few times in fog, but the most tense was being in a squall off the Florida coast near Ft Lauderdale. The jib may have received its tear that time when we couldn’t get it in fast enough- in our defense, the furl line wasn’t long enough to wrap and tail around the winch; have since fixed that problem.

Last but not least, the number of times we’ve seen dolphins, pelicans, egrets, osprey and so many other wildlife creatures: too numerous to begin to count!

Our second sighting of a fresh water turtle

Number of regrets: none

Days we are happy to have this cruising lifestyle: nearly every day!

Today we crossed into South Carolina. Our day was easy, easy. Very little boat traffic with no pack traveling.  Pack travel  happens when you have several bridges with scheduled openings. We avoided a stretch of that by jumping outside at Beaufort, NC down 71nm to Wrightsville Beach. We also missed being delayed for exercises conducted at Camp Lejeune’s artillery range. Boats had to drop anchor and wait up to 1 ½ hrs before allowed to pass through. Announcements are made, but not everyone pays attention. We got to see three large naval vessels off
the coast, two had Osprey-type planes taking off and landing. A chopper circled, making sure no ghost or goblins approached. 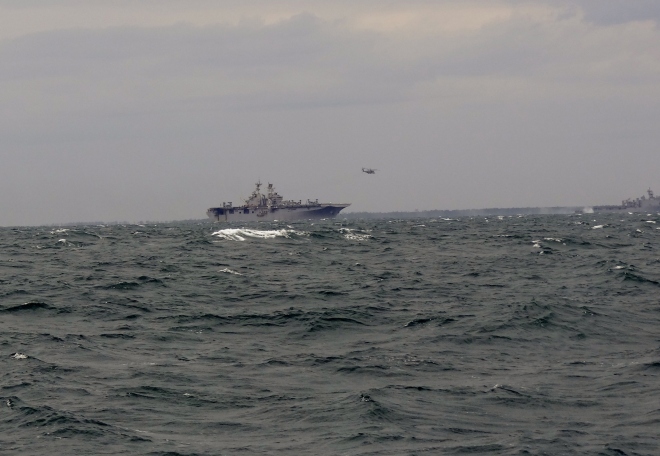 Naval ship, chopper above and 2nd ship to the right

Although the wind and seas were more than forecast for what we figured would be a near-perfect sailing day, causing us to reef a couple hours in, I must say that the same event a year ago would have bothered me more. We had north winds, a following sea and a fairly comfortable ride in 3-5ft swells. We passed two monohulls early on and by 1pm caught up to and passed another cat (an older Lagoon).  The jib complains at less than 30 degrees off, so we reel it in. This day it didn’t cause any loss of speed as the reefed main was doing a fine job of keeping us flying along at 8.5 kts.

Did I miss any stats you are dying to know? If I can’t figure it out, I’ll make it up!