The beautiful weather for our trip to Rhode Island, owed us by the fickle weather gods and goddesses, materialized only a day late.  Sails up and averaging 5.5kts, engines rumbling only 20% of the trip; not bad.
My pre-departure poem: Wind in my face, Sun at my back, My only hope is, We don’t have to tack!
Silly girl, that is not generally a sailor’s wish come true. Happy to report though that our one tack was a very long one on Saturday. Just past Watch Hill, RI we headed toward and just past the tip of Block then headed NNW through Rhode Island Sound and into West Passage.
Our anchorage stops at Fisher’s Island, NY and Dutch Island harbor in RI (behind Jamestown) could not have been more inviting, calm or picturesque. Dutch Island contained the crumbled remains of granite, cement and brick buildings dating back to 1825 when the federal government acquired 6 acres at the southern end of the island. In 1827, Dutch Island Light was established to mark the west passage of Narragansett Bay and to aid vessels entering Dutch Island Harbor. The first 30-foot tower was built of stones found on the island. A new 42-foot brick tower was constructed in 1857 with a fog bell added in 1878. During the American Civil War the island was used by the 14th Rhode Island Heavy Artillery.  This same time period saw the creation of the first earth work defenses on the Island, and sporadic construction continued on the island after the Civil War ended. Following the Civil War, gun batteries were placed on Dutch Island, and by the late 19th century the defensive works had grown to become Fort Greble. Construction was spurred by the Spanish-American War, which included tunnels and gun emplacements, and the fort was enlarged until 1902. The fort was home to as many as 495 soldiers during World War I, but was later abandoned. During World Wars I and II, Fort Greble was actively used as a German prisoner-of-war camp. The fort was active till the mid-1920s as part of the Narragansett Bay Coastal Defenses, and discontinued from service in 1947. Some island history, for those curious as we were. 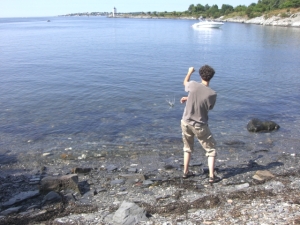 By far though, the best find came when we landed Bunting. (I really dislike always saying “dinghy” and I despise “dink”) The entire beach area around the island is comprised of palm-sized, very thin stones, absolutely perfect for skimming. Better ones we’ve never seen in such abundance.  An entire beach filled with nothing but, except for a few small shells and larger versions of the perfect skimmers. The guys were in their glory and even I had success my first try

Entering the Bullock Cove channel was exciting- more for the onlookers than us. The daggerboards (often referred to as centerboards by monohullers) came in handy when they told us with a thud, that we’d found the edge of the channel, well inside the first red buoy. Oh you mean the one that goes aground at low tide? Yep. To add to the excitement, the sailboat who allowed us no room, moved slowly past us as we tried to back up into deeper water. Could you get out of our way? Are you aground? Well, hell yes thanks to you! A powerboat was bearing down on us and kayakers were off to starboard.  Benj and I were engrossed in attaching lines and fenders on the port side and saw nothing. The thud happened when I had my head between the life lines; luckily it wasn’t a big jolt:  I knew what happened, but Benj wondered if “we hit” meant the kayakers. Phew- no.

Monday August 1 we were hauled out- our first time. We wisely recited various good luck incantations and were calmed by the marina’s obvious competence.