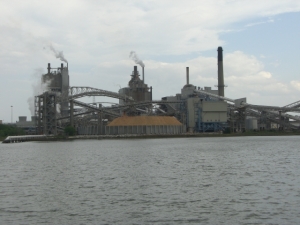 Fernandina Beach, located on the northern part of Amelia Island, is accessible, lovely (reminiscent of Martha’s Vineyard) and the harbor contains a wonderful municipal marina and two HUGE paper factories.  When the wind blew the wrong way, the smell was almost sickening and reminded us of rotten wet cardboard. Had missed this stop on our way south and had both heard and read that it was a good stop, just ignore the factories.
We had a good sail along the coast up from St. Augustine, outrunning the pirates who were speedily departing out the same inlet.(wink, wink). St. Mary’s entrance is a Class A inlet and although we were coming in against the current, we had no trouble.  We were assigned mooring #10, on the outside (row closest to ICW and marina across the river), did our usual quick pickup- have I mentioned how much we like our big mooring clip?- then Russ runs additional lines through and we are snug and secure. A trawler picked up the mooring ball behind us and while I had the “gee these balls are close together ” thought, we didn’t give that another thought… until 3am. The wind diminished and the tide was changing.  Typically when the tide changes, boats turn pretty much in a choreographed fashion, unless the wind messes things up. We heard the mooring ball hitting the hull, which does happen sometimes, followed by a much louder bang near the stern. Why does “stuff happen” at night? The dinghy of the trawler had gotten under our transom and the outboard had hit the hull. It moved away and we watched the “boat dance” all around.  Couple times we started our engines to make sure that the trawler itself did not hit us, but after an hour the tide had realigned the boats on their moorings and we dove back into bed.
Under the mooring ball is a certain amount of chain determined by the tide range- here about 5ft.- so at low tide the boats can be pulled closer to each other by the wind due to more chain available.  We checked out another ball, #17 that was empty and not far away. Russ dinghied over to check the water depth- (the inside row supposedly has less) and to tie a line to the eye on the ball. The inside row balls don’t have a pickup line. After I’d gotten the clip on the line, Russ still had to go in the dinghy and re-clip us to the eye and run a backup line through. It was a challenge; the wind had picked up to 15kts and we had to devise new hand signals for Russ to give me-he’s at the bow in the dinghy and I’m at the helm using one engine or both, in idle or some gas depending on the signal. My favorites are the fist in the air (out of gear) and the cut sign- engines off we are DONE! Phew- this proved a good move and we had no further trouble. I slept well that night.
The next day we were on the move again by 10am- after a few small T-storm cells passed by. More, many more were heading our way. sigh