We’ve continued our cold & lonely trek north finally reaching Cape May, NJ.  We might be here a while as stormy weather approaches with gale warnings & ocean seas of 9′ – 11′ forecasted.  Our next leg is 114 miles offshore up the coast of New Jersey to NYC, so we’d like it a little calmer.

While there have been some calm days …

This has been much more common 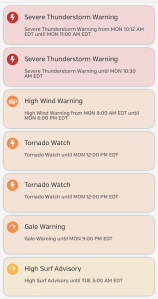 My phone running out of space to display the warnings

We’re seldom as far north in early spring – it’s cold & stormy!  After a while you almost get used to thunderstorm warnings, gale warnings, tornado watch, blah, blah, blah – o.k. – not really!  For the worst weather, we’ve mostly managed to be hiding in marinas, but have been anchored out many cold nights with temps down to 44 & inside cabin temps as low as 49 by morning – hmmm … who gets out of bed first to start the generator so we can start up the heater??

at our favorite restaurant (Spoon River) in Belhaven, NC where we picked up a huge order of fantastic shrimp & grits which was enough for several dinners & even a lunch.  On the other hand, we had to lower our standards in Great Bridge, VA as there was only a Chili’s next to the grocery store in walking distance.  The only saving grace was they had their margaritas to-go as well! Their curbside pickup was a little sloppy as they were repeatedly going car-to-car close-up to opened windows asking which order was whose – not a great system.  We kept stepping further & further away from curbside until we were on the other side of the parking lot by the time our order was ready. 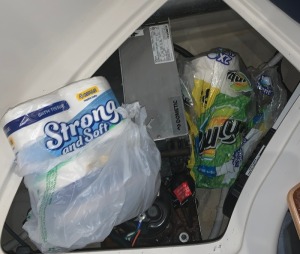 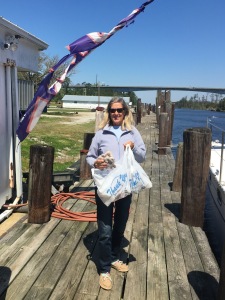 We had passed this somewhat run-down looking shrimp dock in Hobucken, NC called RE Mayo Seafood many times without stopping.  Since we were running out of shrimp (our usual shrimp stop in Beaufort didn’t have any since they primarily sell wholesale to restaurants so their shrimpers weren’t even going out) we thought we’d take a look.  WOW!  Super clean & super nice with a huge selection of shrimp, fish & even lobster.  Nearly everything they offer gets unloaded right at their dock.  Lori walked out 20 minutes later with a big smile & her big bag of loot.  Even the cost was unbelievably reasonable.  With their own dock right along the waterway, we’ll definitely be making this a regular stop. 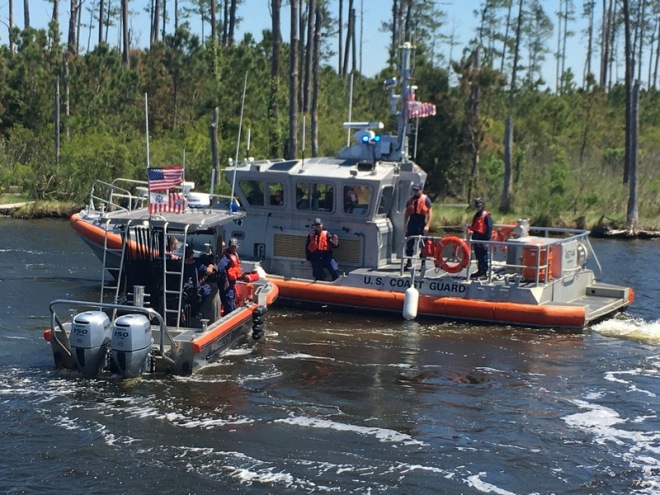 Right after RE Mayo Seafood there is a small U.S. Coast Guard station where they were (hopefully) just learning, as we caught a bit of yelling “Watch out! – Watch out!”

Ospreys distancing themselves in style

5 thoughts on “Holding Out in Cape May, NJ”