Beaufort, NC is another must-stop on our way thru.  We usually stay at Homer Smith’s Docks, somehow an easy name to remember.  This is an old-time shrimp boat dock/processing facility which is adding more modern marina space with a free washer/dryer, loaner car & a coming-soon clubhouse building with even better offerings.  It’s always a pleasure dealing with Tony, the owner, who I don’t think would be offended if I called him a “good old boy”.  Before they had a loaner car, he just threw us the keys to his new personal $50,000 pickup truck.  We also stock up with the best shrimp, right off the boat (and sometimes mahi or swordfish), but were disappointed the shrimp weren’t cooperating that week, although a boat with flounder was coming in soon. 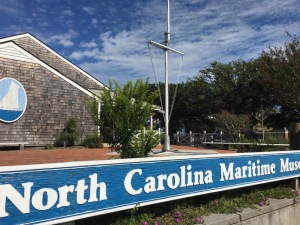 A 10 minute walk brings you thru a historical neighborhood of small houses from the late 1700’s to the early 1900’s, to the Beaufort waterfront of shops, marinas & restaurants.  We hadn’t visited the North Carolina Maritime Museum since our first time thru & were pleasantly surprised at their expansion.  Much of their new space is devoted to the wreck of the Queen Anne’s Revenge, Blackbeard’s flagship, which ran aground attempting to enter the Beaufort Inlet in 1718 while trying to hide from the British.  The British were determined to end piracy for good after Blackbeard & his men successfully blockaded the port of Charleston the month before, causing panic, partial evacuation & much embarrassment that a bunch of pirates could overwhelm such a fine, southern city. 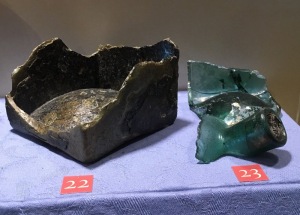 In 1996 the wreck was discovered just off the inlet & a careful recovery began. It took 3 years just to confirm the ship’s identity, as there are thousands of shipwrecks off the Carolinas with hundreds near this inlet alone. It was a painstaking process – one clue was that the cannons recovered were such a mishmash of calibers & countries of origin – this lead to the conclusion that they had likely been removed from various captured ships. To date, over 300,000 artifacts have been recovered, with a few hundred restored & displayed at the museum, as it is such a slow process. Interesting, chests of gold are not expected to be found, as what do pirates do?  They take their treasure & bury or hide it.  After the grounding, Blackbeard, his men & likely any treasures escaped onto another ship.  Blackbeard soon surrendered & received a royal pardon, only to return to piracy after only a few months & was killed in battle soon thereafter.

With an excellent weather forecast, we decided to head offshore from Beaufort Inlet to Masonboro Inlet (Wrightsville Beach), onward to Carolina Beach & down the Cape Fear River into Southport – about 100 miles. We like to do this trip offshore if possible, as this portion of the ICW has some of the worst shoaled areas, a few opening bridges & there is a spot near Camp Lejeune which sometimes gets shut down for hours at a time due to military training & live fire exercises.  The perfect weather was … perfect & we even had a 2 knot current with us down the Cape Fear.  At Southport we enjoyed a great dinner at Joseph’s – one of our favorite Italian restaurants & it’s even located right in the marina.

With remnants of Tropical Storm Nestor heading our way, we zoomed down the rest of North Carolina 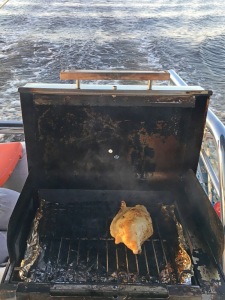 coast which even meant grilling our chicken dinner underway just before setting anchor at sunset up a creek.  Surprisingly our grill often gives me problems, always blowing out, etc., but apparently it must be a marine grill, as it worked perfectly underway zooming down Winyah Bay!

The next day we arrived in Charleston to wait out the rain & wind.

One thought on “Continuing Down the North Carolina Coast”