Some things you can only put off for so long …

After almost 3 years, our bottom paint was no longer doing its job very well, which meant more swimming to scrape off barnacles & scrub off growth – almost fun in the Bahamas – not so much elsewhere.  We attempted to haul-out in Florida, but the yards were extremely busy, as many cruisers (especially Canadians) haul-out & leave their boats in Florida for hurricane season. 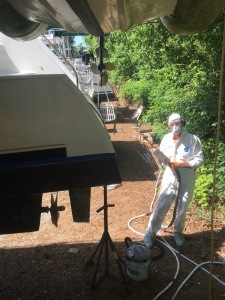 The sanding isn’t fun either…

… but I had my best helper working hard!

We found a recommended boatyard in Deltaville, Virginia which could handle our wide beam, allows do-it-yourself labor & living aboard “on the hard”.  It may be called “on the hard” because you’re on hard land, but living aboard while hauled out is pretty hard as well!  We had electricity to run our refrigeration … but that was about it.  Our A/C can’t work on land.  The water at the marina is not potable – we only had the water in our tank.  Deltaville is fairly remote, so no taxis, Uber or rental cars, which also meant no restaurants, grocery stores or take-out.  Our timing was bad with the Memorial Day 3-day weekend, so we had to hustle and finish in 4 days or be stuck for 7 days.  Boy, did we hustle – successfully launched Friday afternoon with 2 coats of bottom paint & hulls (mostly) waxed.

In the end, Stingray Point Boat Yard was a good yard to work with & they were very accommodating to our hauling/launch schedule.

3 thoughts on “A Small Detour on our Way North”