Enjoying nice weather & low winds, we decided to push on thru Georgia.  Having higher tides while transiting certain areas is critical.  Many areas need serious dredging (to transit at low tide), but with 7′ tides, there is plenty of water if you time your trip correctly.

Cumberland Island is one of our favorite stops. 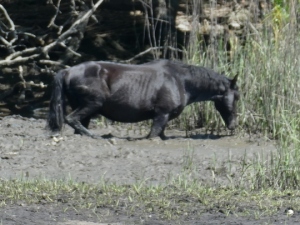 Most boats anchor near the southern end of the island at Dungeness, but this time we anchored near the northern end in the Brickhill River.  While we arrived too late to spend time ashore, we were treated to quite the show right next to our boat.  These 2 feral horses decided to sample the tender shoots growing on the muddy bank.  We were getting a bit nervous as this one explored further into the muck & kept sinking deeper & deeper.  We couldn’t do much – would the Park Service respond if we called?  These are wild horses – would they just let nature take it’s course?  After a while, no worries, he just plodded out as if it was no big deal. 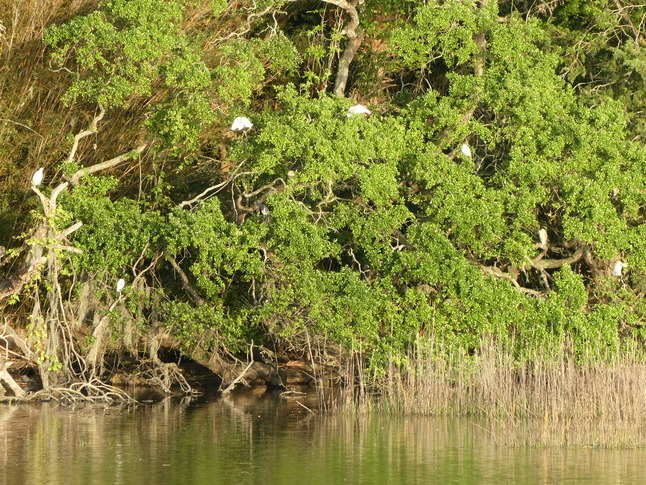 Next the birds arrived – Dozens of large birds gathering to roost for the night.

This photo can’t capture them all, as many blended right into the trees.  The bird to the right is a wood stork.

Earlier, we spotted a family of feral boars checking out the water’s edge, but were scared away by our approach before we could get out our camera.

It is a bit funny that during our first trip to Cumberland Island 9 years ago, we didn’t see a single creature, even though we walked across & about for several hours.  Since then, we’ve been rewarded with hundreds of sightings of the horses, armadillos, etc. – sometimes so numerous that they’re blocking our way as we walk down a path.

Cumberland Island is a fascinating place to visit with an amazing documented history going back to the 16th century, although possibly occupied as early as 2000 BC by aboriginal people for it’s diverse & delectable food sources including oysters, crabs, fish, deer & bear.  In the 1800’s, it was a getaway for rich Industrialist families including the Carnegies.  Now it part of the National Park system.  Wikipedia has a great summary of the island & especially of it’s fascinating history https://en.wikipedia.org/wiki/Cumberland_Island