Anchored behind Rolle Cay- the dark shade rolling over us

As I mentioned in the prior post, Elizabeth Harbour contains oodles of anchoring space; however our view is often from the more protected (read “out of the way”) spots but at least we move around unlike some boats whose anchor has become one with the sandy bottom.

Years ago, as in 20 or more, before the Chat ‘n Chill arrived on the part of Stocking Island now called Volleyball Beach, boats didn’t anchor in the harbor as we do now. They anchored in the more protected areas such as behind Crab Cay and the Red Shanks Cays. The Red Shanks Yacht and Tennis Club was the thing, with regular beach parties and the placing of conch shells up on the rocks.

–But ever since Chat ‘n Chill opened- I mean who doesn’t love a beach bar with T-shirts dangling from the rafters, warm beer and lousy food that you order yelling over someone’s shoulder because the TV is blaring music vids- oh and house music too. Trust me, it’s vacationers who keep the place going, not the cruisers.

When we arrived on Jan 24th the boat count was roughly 170; pretty empty for end of January. By mid- Feb the count had swelled to 230; less than average. By March 4 the count was 256; 40 less than the recent average. Hard to say why. Could be due to Regatta a week later, or not a single miserable cold front the entire month of February. Much of the time it seemed like boats were leaving for points south faster than ones arrived to take their place.

During all of February, not a single cold front got pushed down here so the Easterlies- no, not Easter Lilies!-  reigned supreme. That meant the wind would blow 10-20 most days out of the East with some days northeast- ish and some southeast- ish.  On one hand consistency is good and on the other, variety would be preferred. With no L&V winds that often precede a front, sometimes lingering for days, we had precious few days calm enough to anchor in the main anchorages, let alone dinghy anywhere we wished.

Looking at Stocking Island from Rolle Cay. We did this a lot!

Underway from Monument to Rolle Cay. Higgins Landing light-colored bldgs- (For Sale), Lumina Point taller one and brown ones to the right

Today, so calm, even a houseboat can do it

The anchoring hole behind Chat N Chill is called the Fruit Bowl; all the house boats (rented/owned by French Canadians) have names such as Mango and Papaya but you need to say them with the proper accent like- Pa Pie Ya, Man Go 🙂  On calm days they venture out; kin folk. 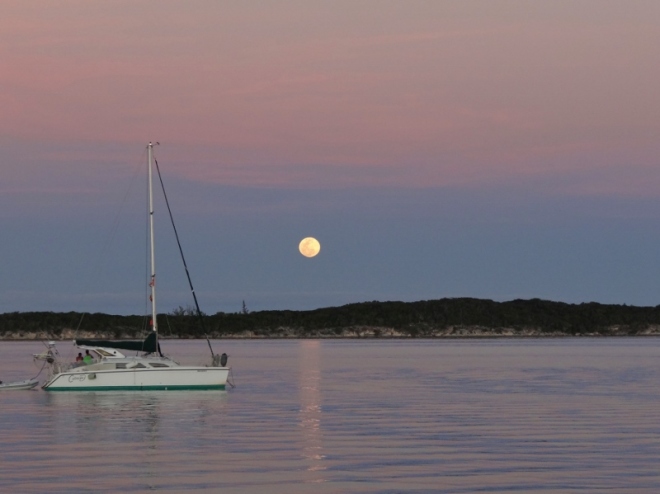 Moon rise over Crab Cay from the Litter Box (get it? cats go there) at Feb Point, George Town

The Litter Box isn’t as glamorously named as The Fruit Bowl, but then again, we didn’t name it. 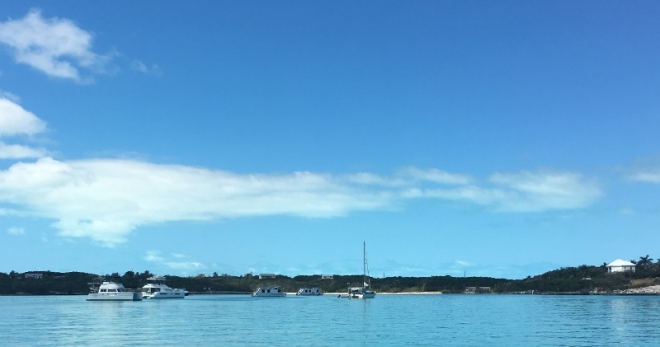 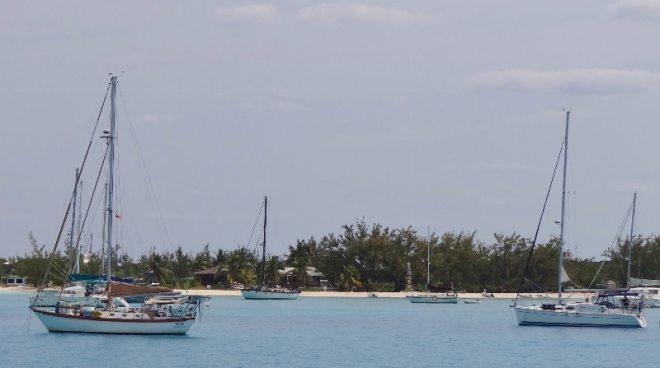 Looking at Chat n Chill and the popular sign totem. Behind the trees are the beach volley ball courts

Honeymoon Beach- lies in between Monument Beach and VolleyBall Beach- are you lost yet?

Meanwhile, back in the Litter Box…